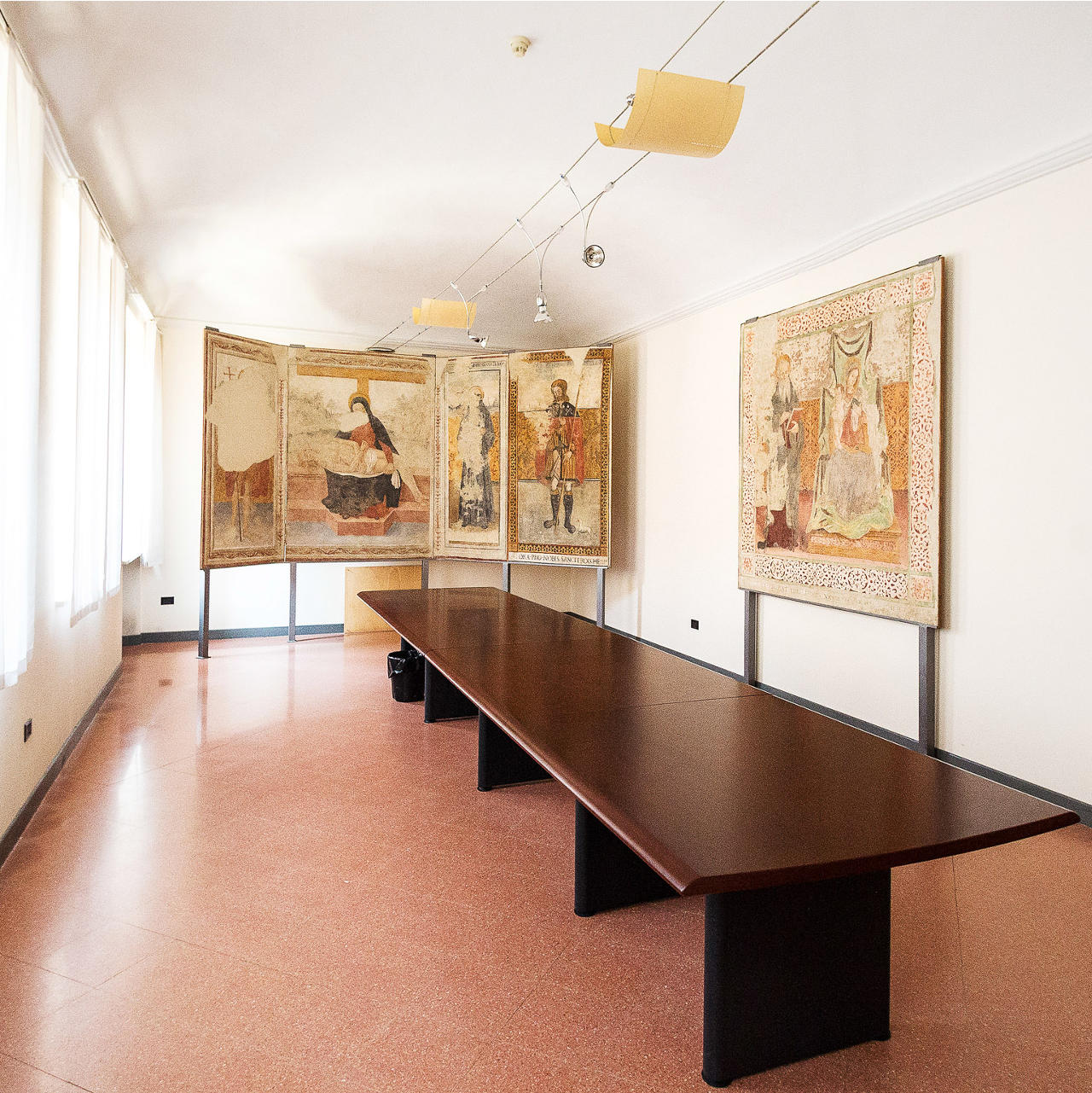 In the reception room of the Municipality of Ceresole d’Alba we can admire six frescoes of the 16th century ripped off the walls of the chapel of the Madonna del Buontempo. The country church, now in ruins, is located on the plain of the town towards Carmagnola, and was rebuilt by the noble Filippo Roero in 1490. They tell ancient stories of thaumaturgic saints, invoked by the local population against the plagues and wars that plagued their territory.
NEI DINTORNI VEDI I SENTIERI MAPPA SCHEDA TECNICA

FRESCOES from the CHAPEL OF THE MADONNA DEL BUONTEMPO

Thaumaturgic saints and traces of Landsknechts: precious sixteen-century frescoes of the Ceresole Plain

In 1490, when it was rebuilt by the Roero family, the Chapel of the Madonna del Buontempo was perhaps bustling with intense life on the plain of Ceresole d’Alba, where it still stands today. Today it is in a state of total abandonment. Only the restoration work requested by the Traversa Museum of Bra and “Italia Nostra” allowed the partial recovery of the frescoes, exhibited in the reception room of the Municipality of Ceresole. 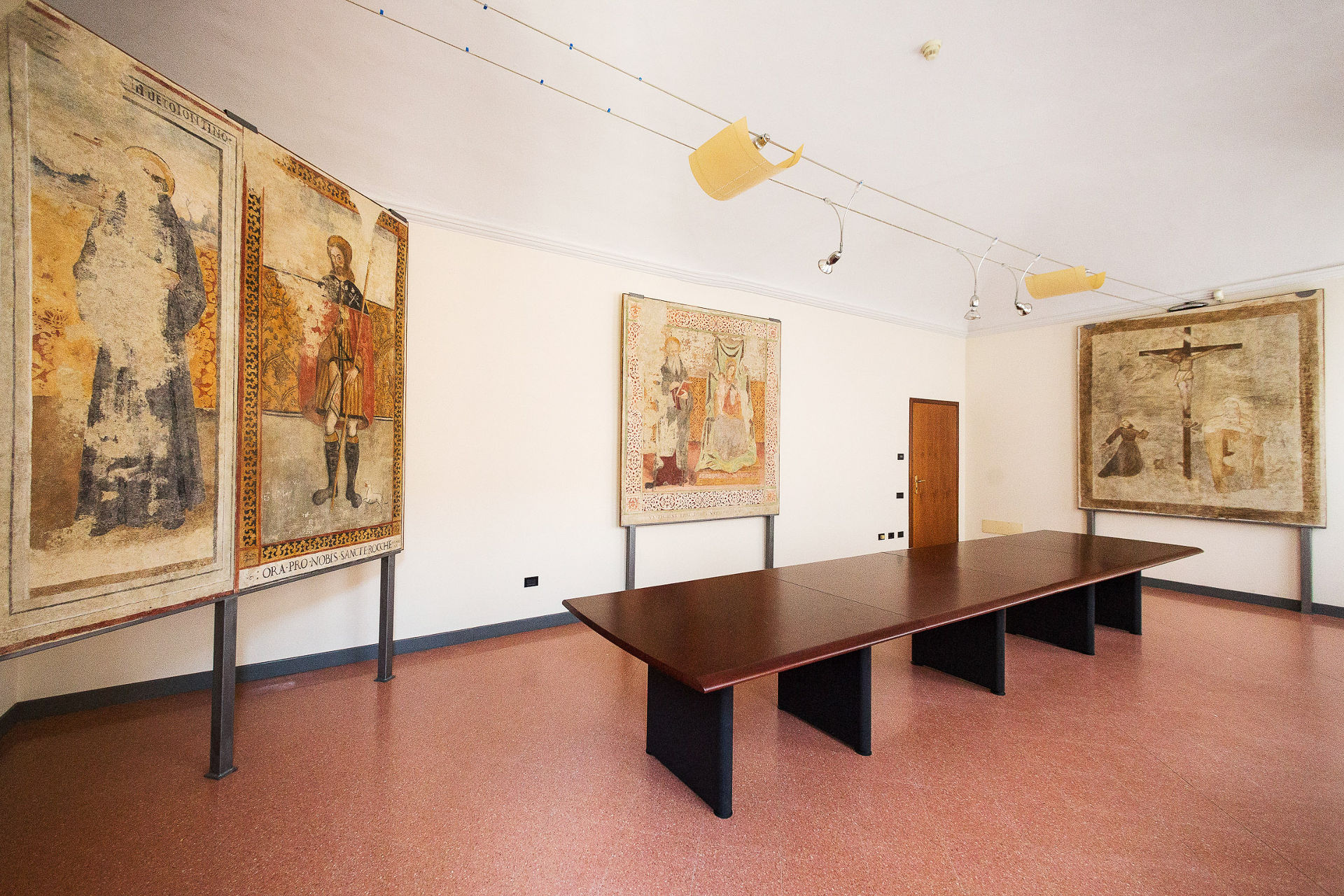 In the Town Hall we can admire six frescoes ripped off the walls of the original chapel: four of the five apsidal frescoes; a fresco originally present on the right presbytery wall; and a wall painting of popular setting and subsequent period.

The first figure we find in the apsidal cycle is San Giovanni Battista, originally flanked on his left by San Bernardino from Siena, whose cult was notably widespread also due to the possible thrust of the lords of Roero. San Bernardino has been lost, while the image of the Baptist remains very ruined and almost unrecognizable, until 1973 it was still in good condition, as evidenced by the photographs published by Walter Accigliaro. 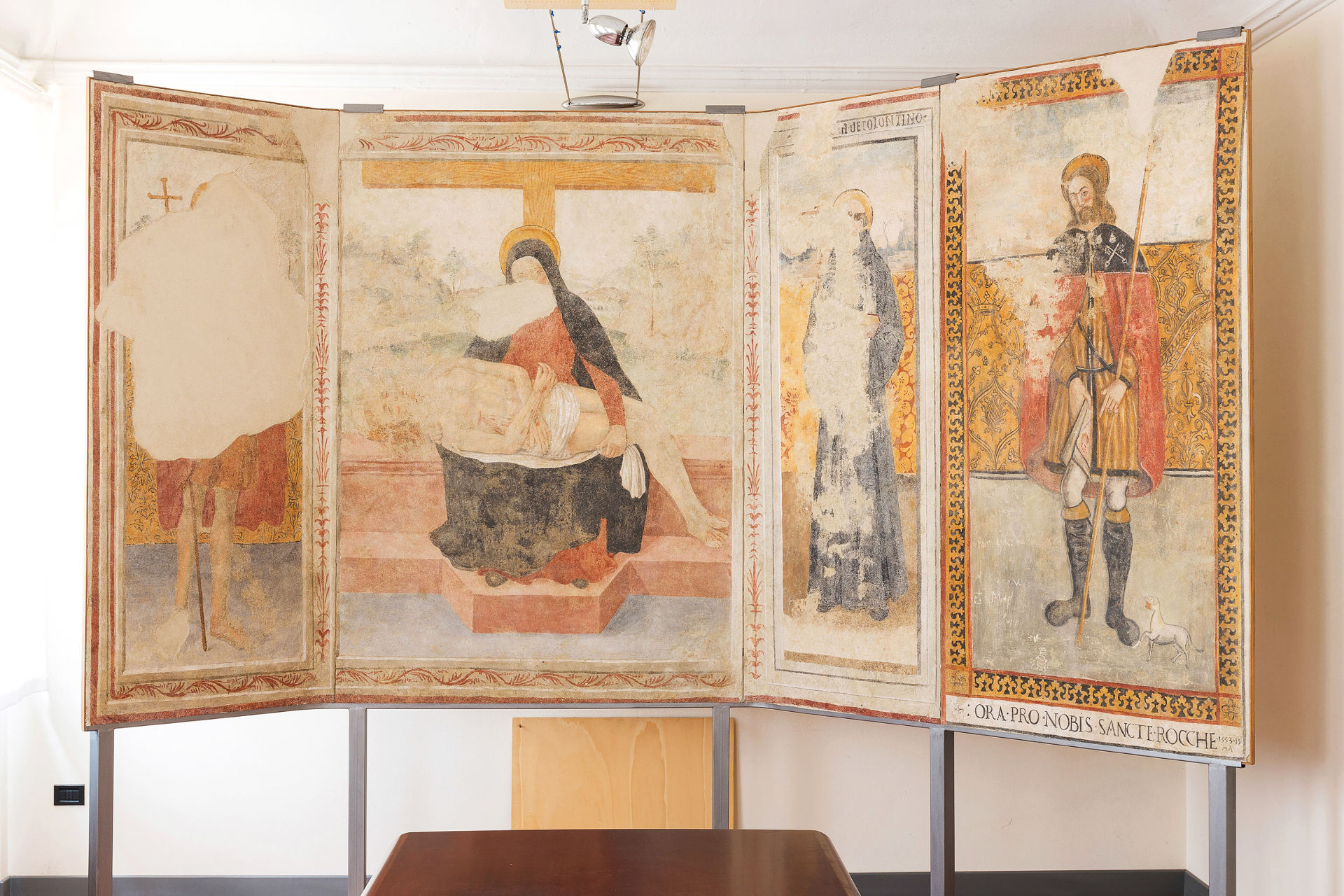 The middle of the sacred choir was characterised by the intense representation of the Pity, an iconography that was widely spread during the fifteenth century, although it was not present in the canonical Gospels.

The first Pities appeared only in the 12th century in Byzantine painting, and then had considerable success in Germanic art in the 14th century and arrived in Italy in the 15th century. Until the sixteenth century and the Counter-Reformation, iconographies did not represent only the Virgin with Christ, but also other characters. It was only after the Council of Trento that the Pity was gradually reduced to a more symbolic representation with only Mother and Son, connoting itself more and more in a suffering sense and ideally symbolising the painful offering to God by the Madonna, a prelude to the ritual sacrifice of the Mass.

In the scene of the Ceresole fresco, the Virgin is seated in the middle and holds the dead Christ in her lap, lying on a white shroud.

Some scholars trace the position of Christ to the Flemish tradition: a Nordic influence that perhaps influenced this anonymous painter, a possible admirer and follower of Giovanni Martino Spanzotti, an artist who worked in Casale Monferrato (AL) in the fifteenth century who introduced Piero della Francesca novelties in Piedmontese art.

The positioning of the elements follows rigorous geometric calculations, as a closer eye can deduce: the pyramidal positioning of the two figures, respect for the diagonals and the reference to the golden section. The rigidity of the cold corpse and of the sorrowful Madonna contributes to make the scene dramatic.

Unfortunately, even in this case much of the fresco has been lost, but until 1973 the features of the face of Christ and Mary were visible, as well as a hilly landscape in the background.

On the right, the other two apsidal walls depicted two saints protagonists of miracles. The first is San Nicola from Tolentino, identifiable by the inscription above. The second is San Rocco, as evident from the lettering below ORA. PRO. NOBIS. SANCTE. ROCCHE. 1553. 15. MAR… from which, for stylistic homogeneity with the other paintings, the dating of the cycle can be deduced. San Nicola and above all San Rocco were considered powerful miracle workers for auspiciousness against the scourge of the plague.

The choice of the saints was not accidental, considering the troubled period that these areas were living in the century in which the frescoes were painted, with the conflicts between the French and imperial armies and the consequent raid and epidemics brought by the soldiers.

All four saints on either side of the Pity are depicted in an upright position. Behind them, a golden and decorated fabric forms the basis of the background landscapes, barely visible today.

Both figures are scratched by overlapped writings with non-native names or supplications, also bearing dates such as 1558 and 1564. The scholar Carlo Avataneo considers them to be the work of the Landsknechts who passed through this area and perhaps bivouacked in the Chapel of Buontempo. This is a circumstance to be placed in the context of the ongoing wars between the French and the Imperials during the sixteenth century: noteworthy both the famous Battle of Ceresole in 1544 and the fire of the town by the Spaniards in 1558.

SAINT ANTHONY THE ABBOT AND THE VIRGIN AND CHILD (1581)

On the right wall of the Municipal Hall, as it was originally placed on the right presbytery wall in the Buontempo chapel, we can admire another fresco which dates back to 1581. The protagonists are Saint Anthony the Abbot and the Virgin and Child. The author is certainly different from the one of the apse wall. 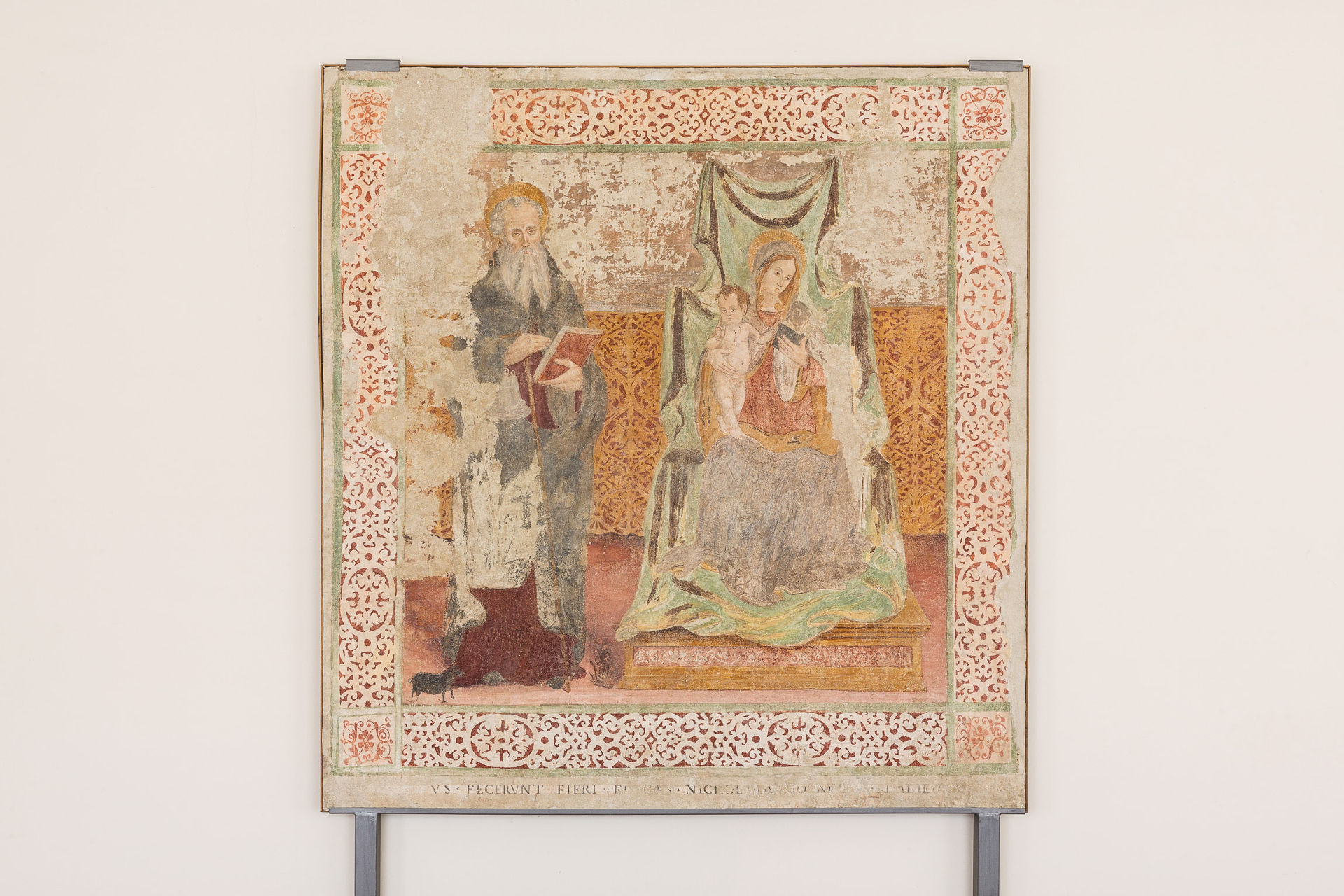 Saint Anthony the Abbot, founder of monasticism, protector of domestic animals and invoked against infections, is represented together with two iconographic elements that usually accompany him. The first is the little pig, visible at his feet: the monks who used to refer to him used to raise a pig for the poor, which had free circulation in all the fields and in the houses of the parish.

The second element is the tau stick, used by hermits to lean on it during the long and tiring monastic activities in which sitting and resting were forbidden. The shape traditionally recalls that of the cross, and is equipped with two bells which according to tradition prove to be effective “against devils”.

The Saint flanks the Virgin and Child at the same height, they are seated on a throne wrapped in a cloth.

The fresco is finely decorated at the edges, and the underlying epigraph reveals the commissioning and dating. “HOC. HOPUS. FECERUNT. FIERI. EREDES. NICHOLA. DE. GIOANNINI. 1581 A die 17…”. Therefore the heirs of the late Nicola de Gioannini commissioned the fresco in 1581. The unknown artist turns out to be a follower of Macrino d’Alba, comparing this work with the Macrinian painting of 1495 that was in the Alba church of San Francesco, which has long been preserved in Frankfurt in Germany.

CHRIST ON THE CROSS AND SAINTS (19th CENTURY?)

On the wall in front of the apse frescoes we find a third fresco ripped off the walls of the Buontempo chapel.

It is a depiction of a subsequent period, of a popular character. It was perhaps executed by an unknown Piedmontese painter between 1867 and 1878, when the building, reduced to a lumber yard, was redeemed by Earl Alessandro Roero. 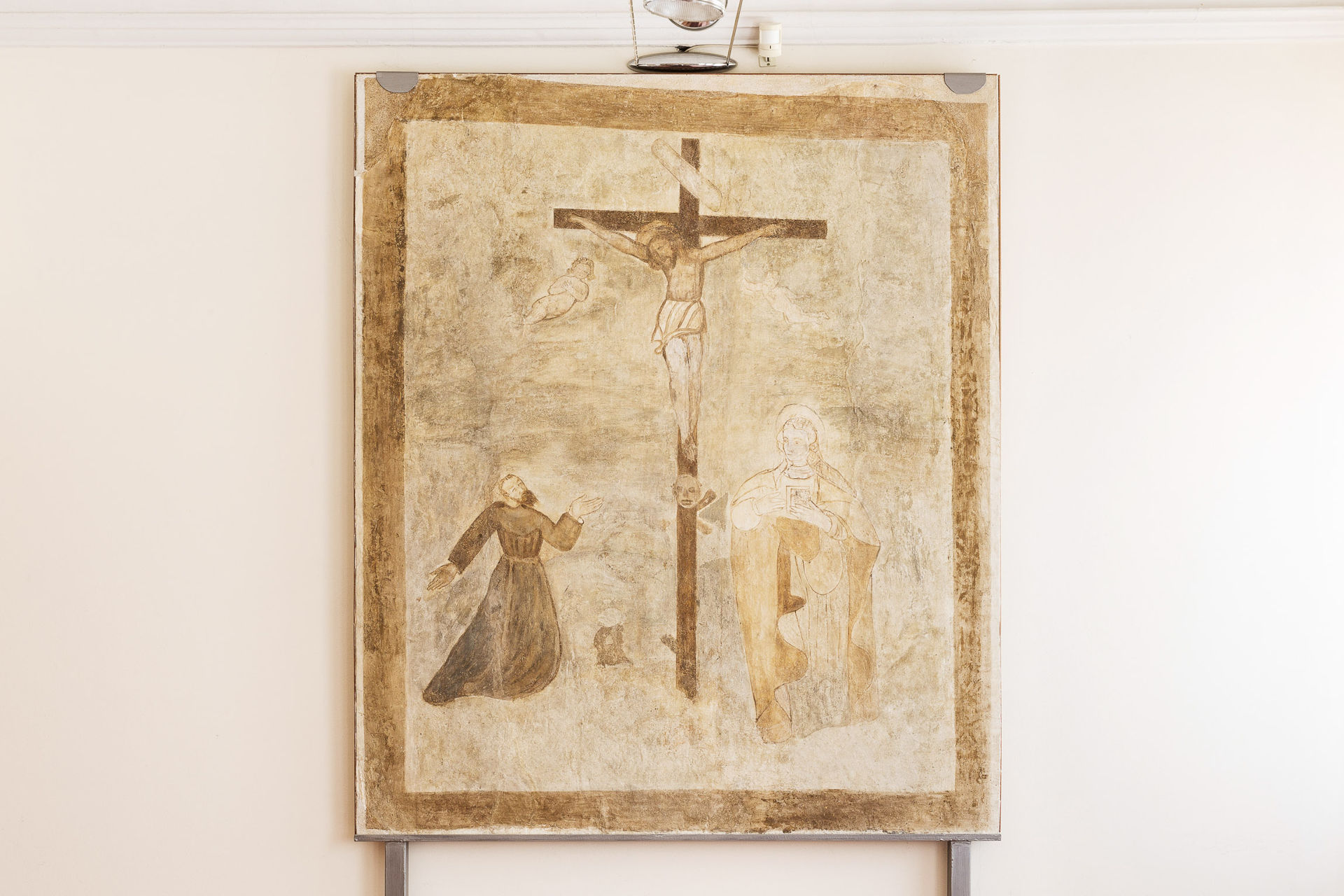 In the middle of the scene there is the cross with the suffering Christ, flanked by two barely visible angels.

At the feet of Jesus it is possible to see a skull, a symbol often depicted at the foot of the cross. According to tradition, the episode narrated in the Gospels took place on the hill called Golgotha (“Skull” or “Cranium” in Aramaic), the ancient burial place of Adam.

Under the cross, a saint in a cassock turns his gaze to Christ, while on the right side a woman carries the Gospel in her hand. 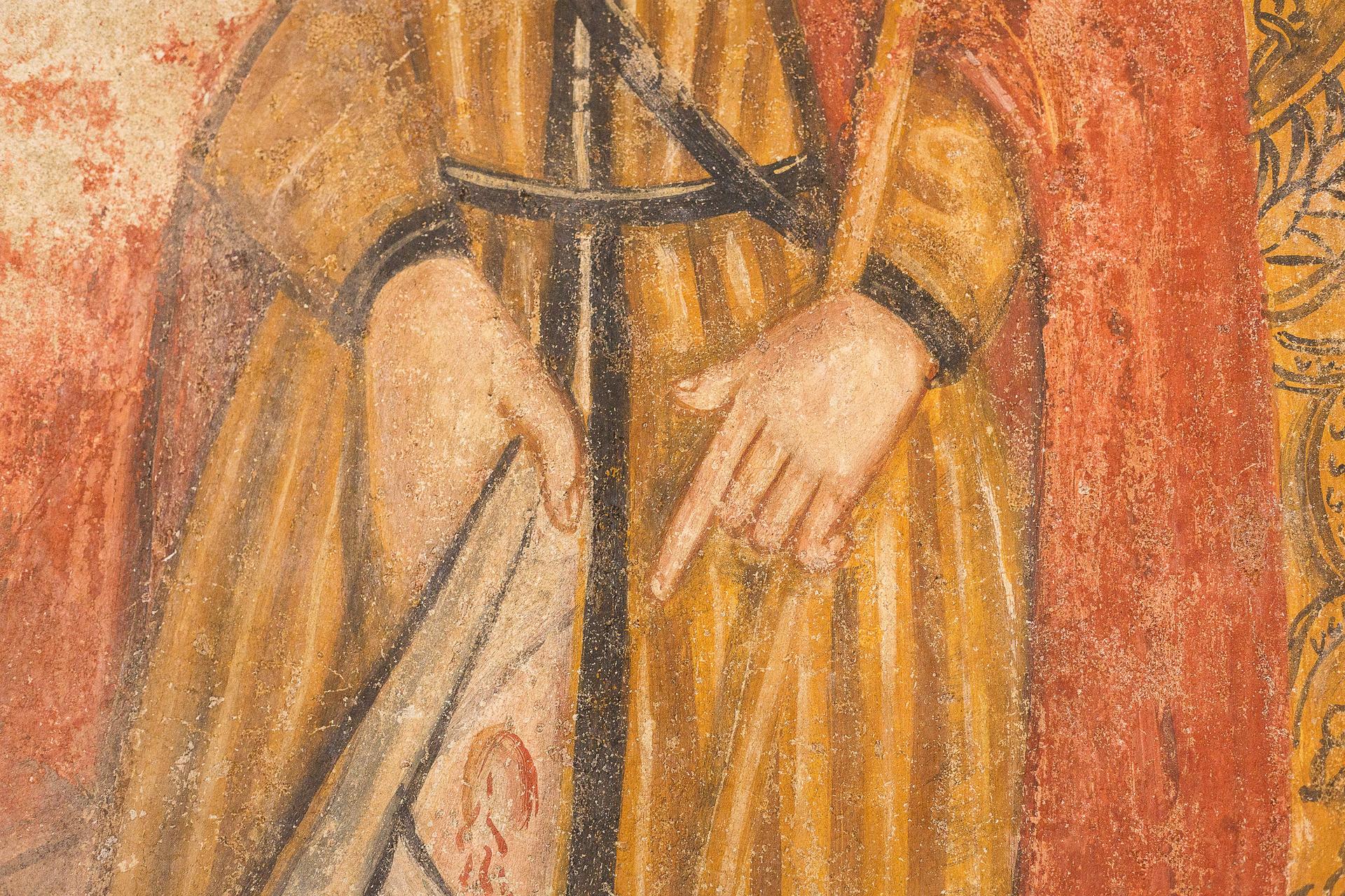 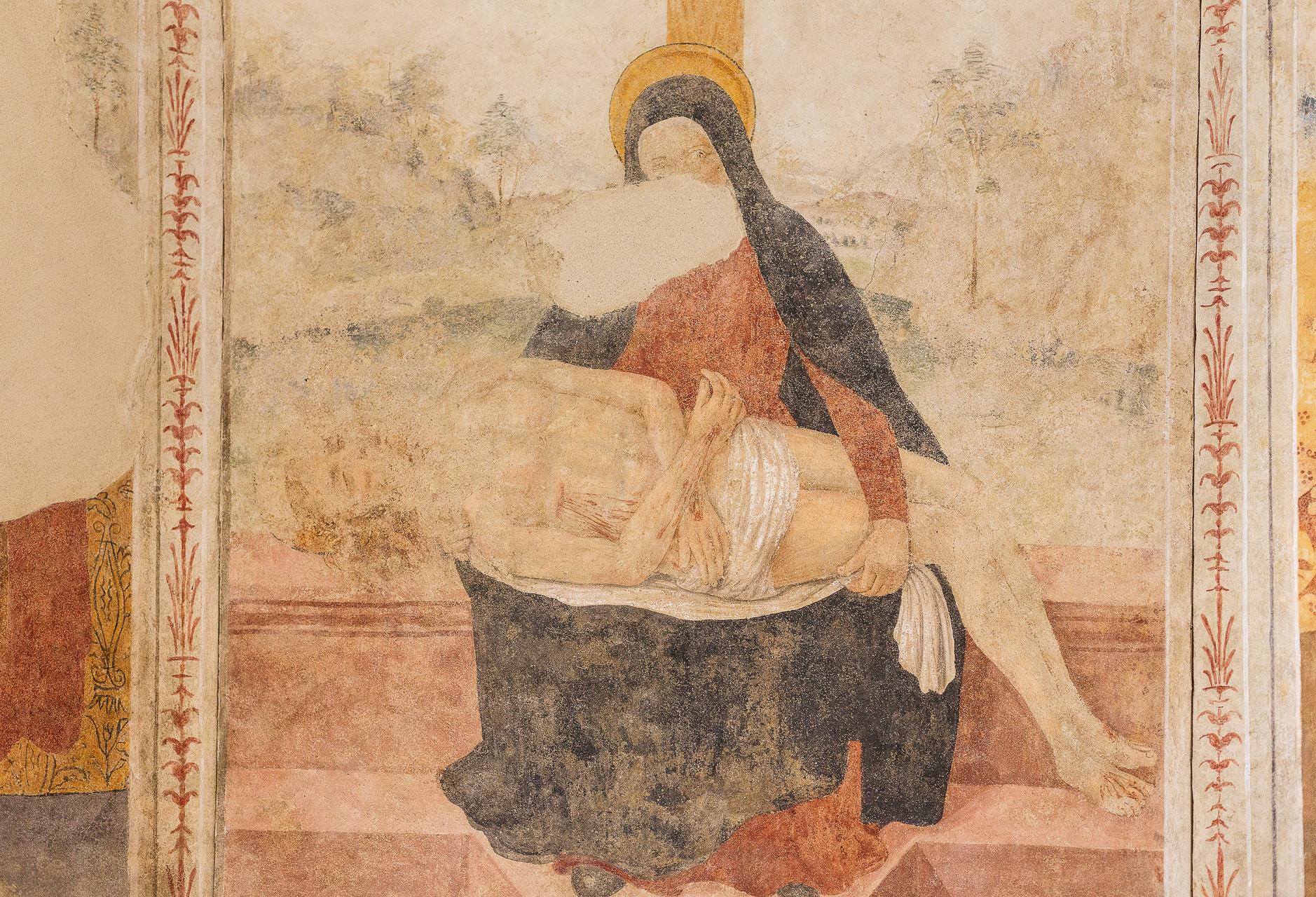 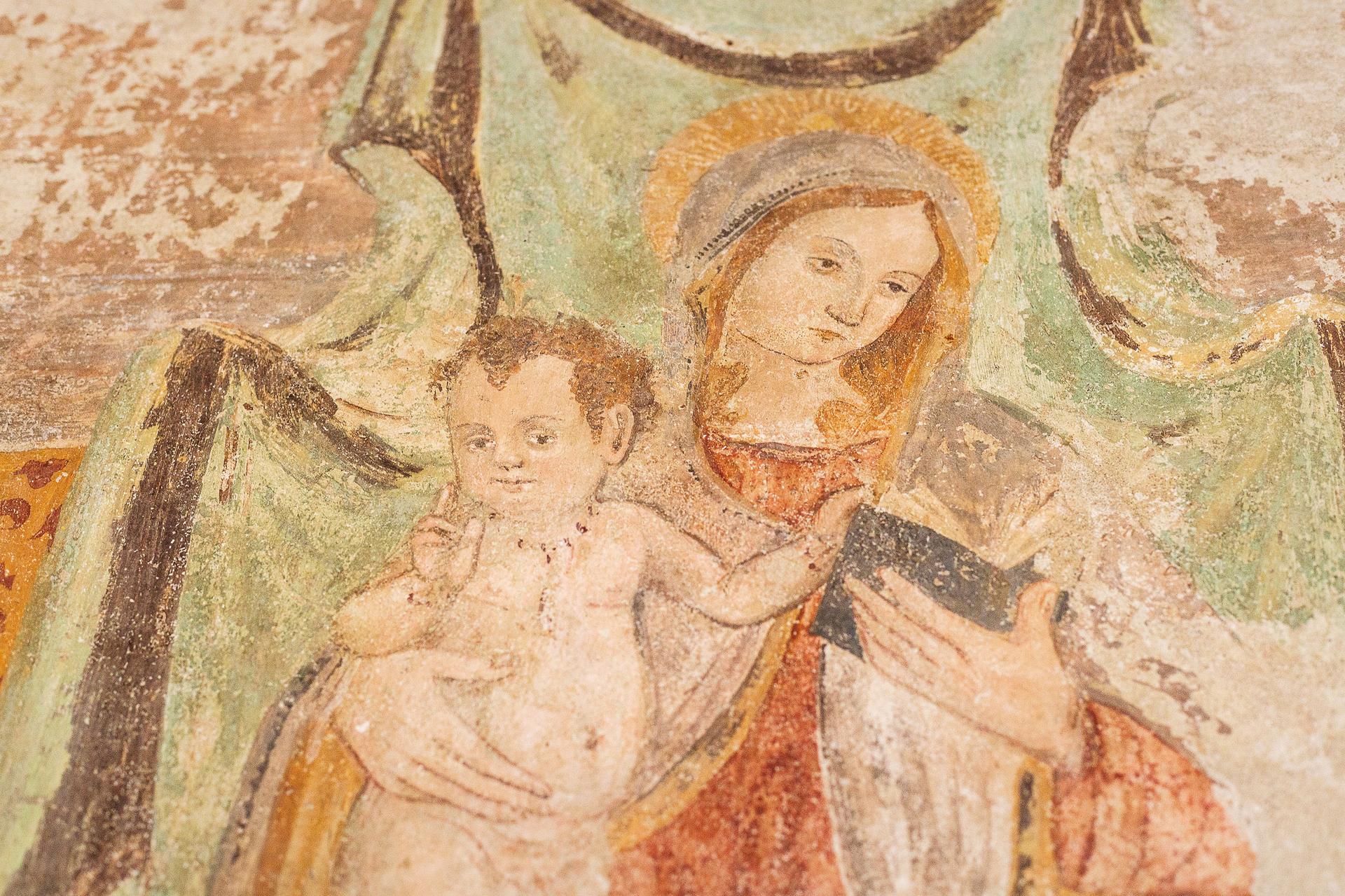 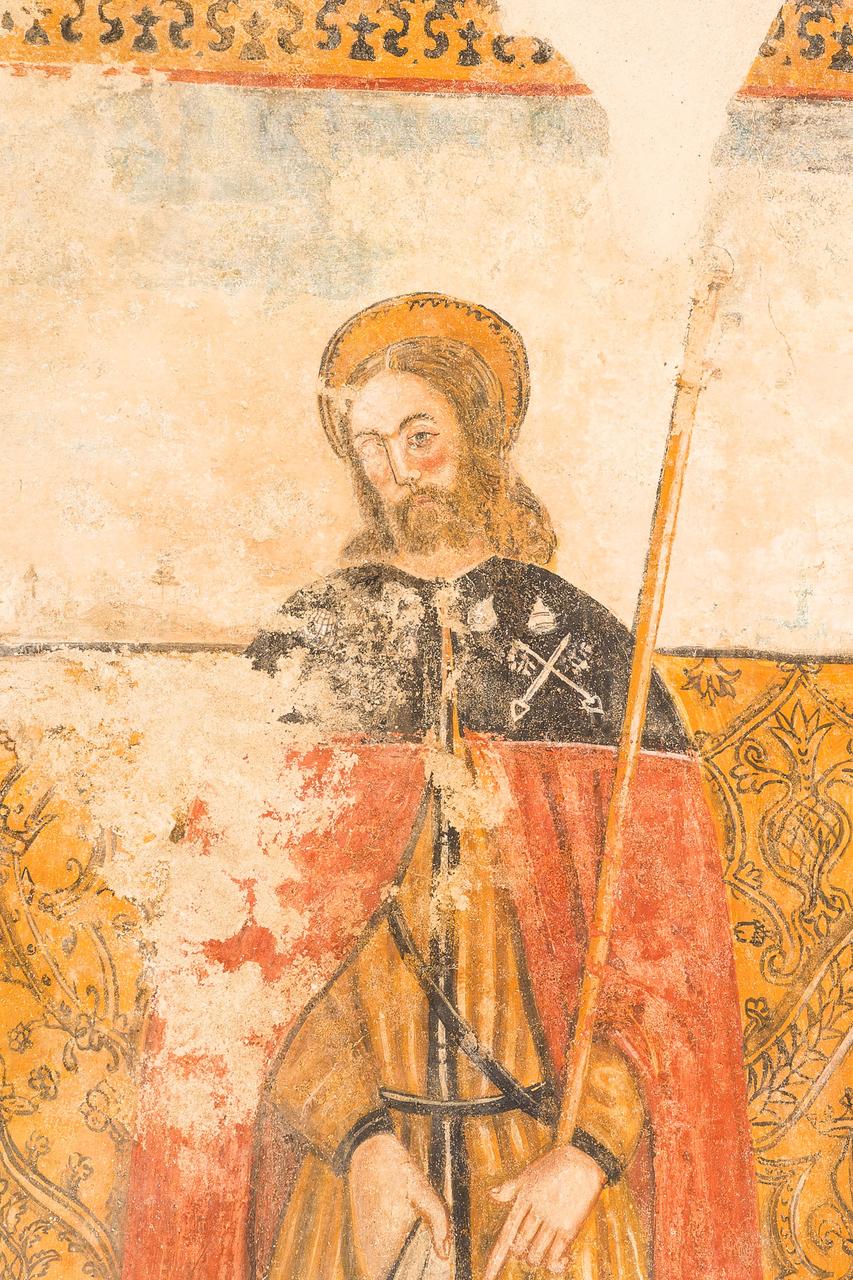 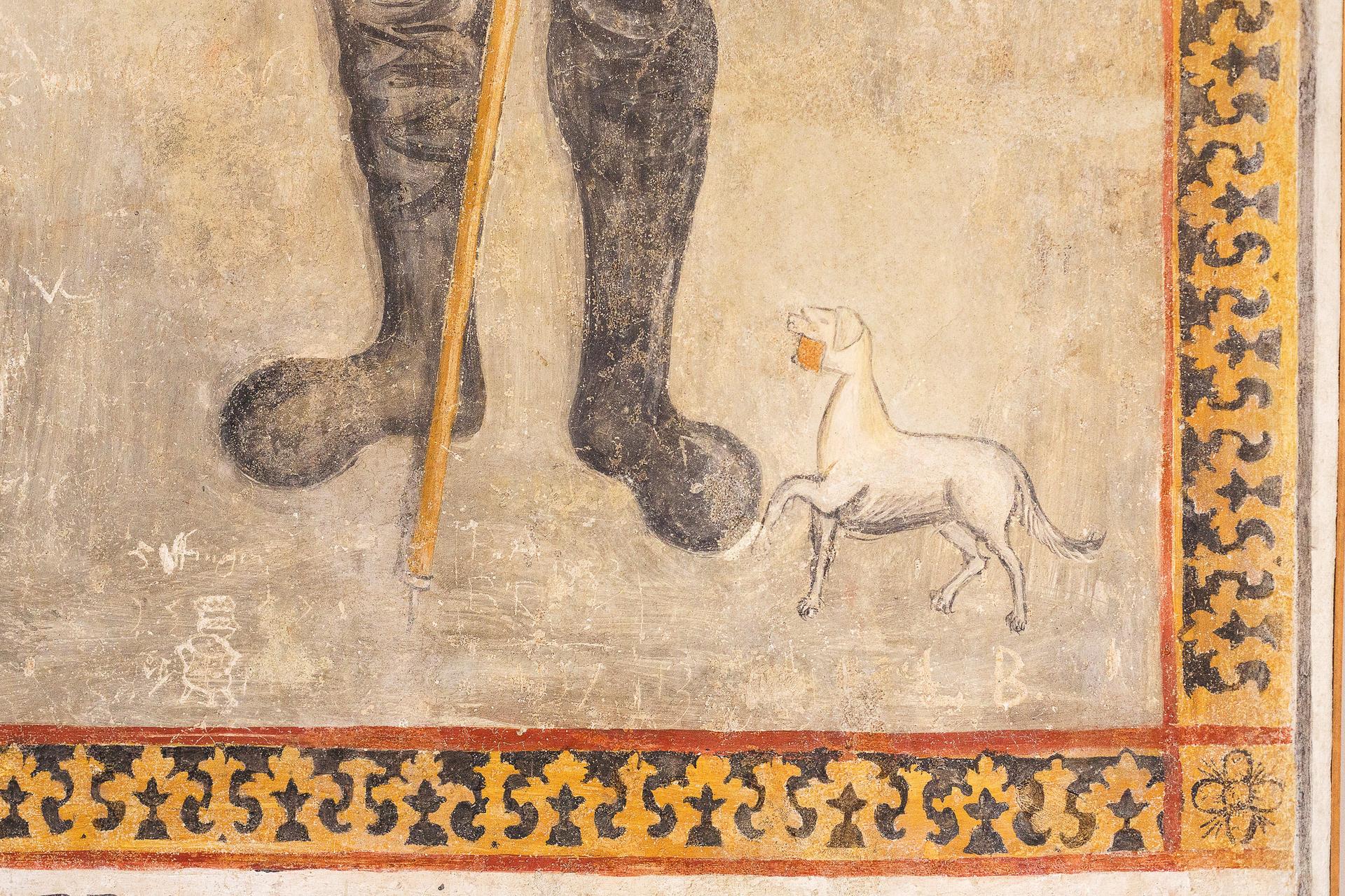 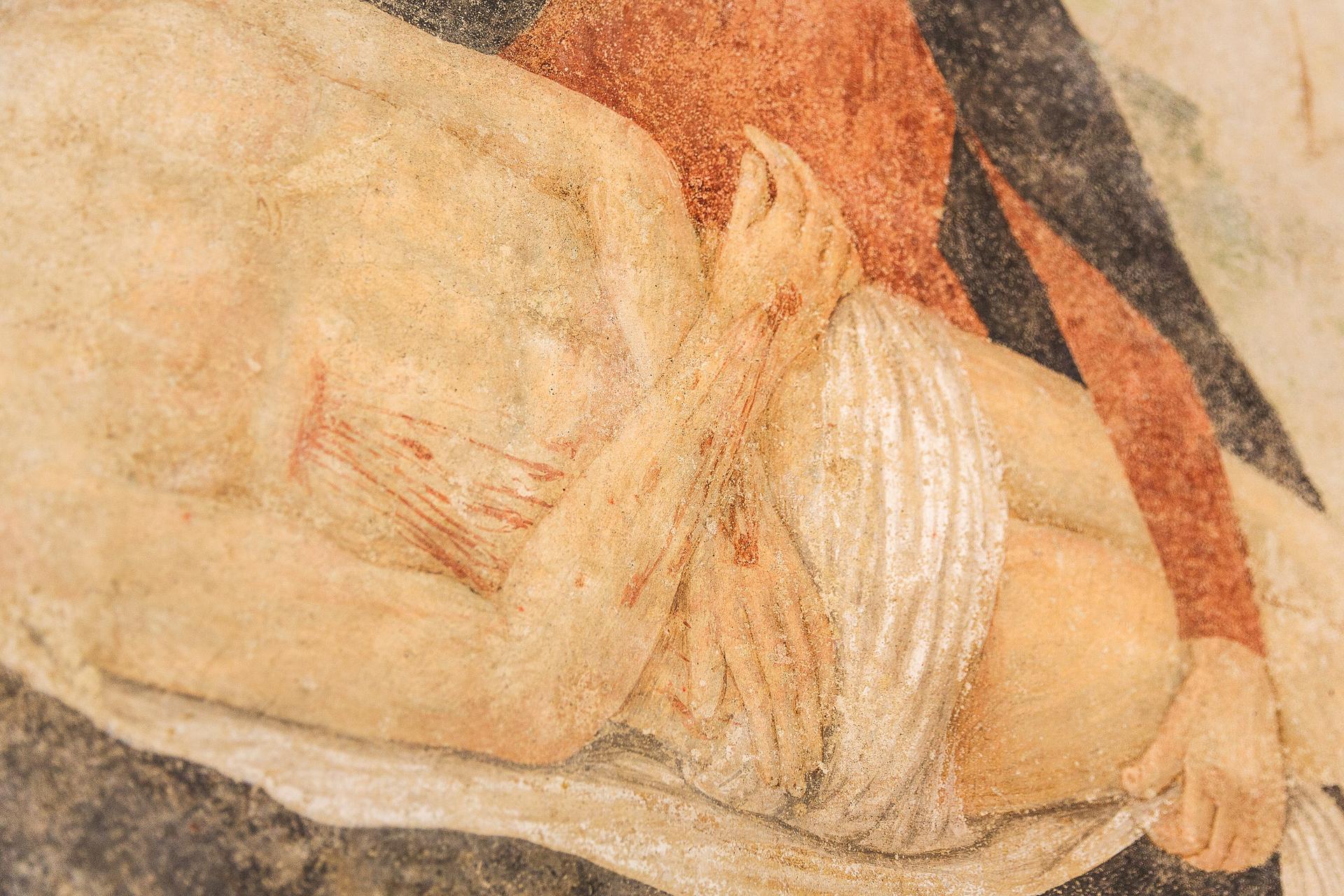 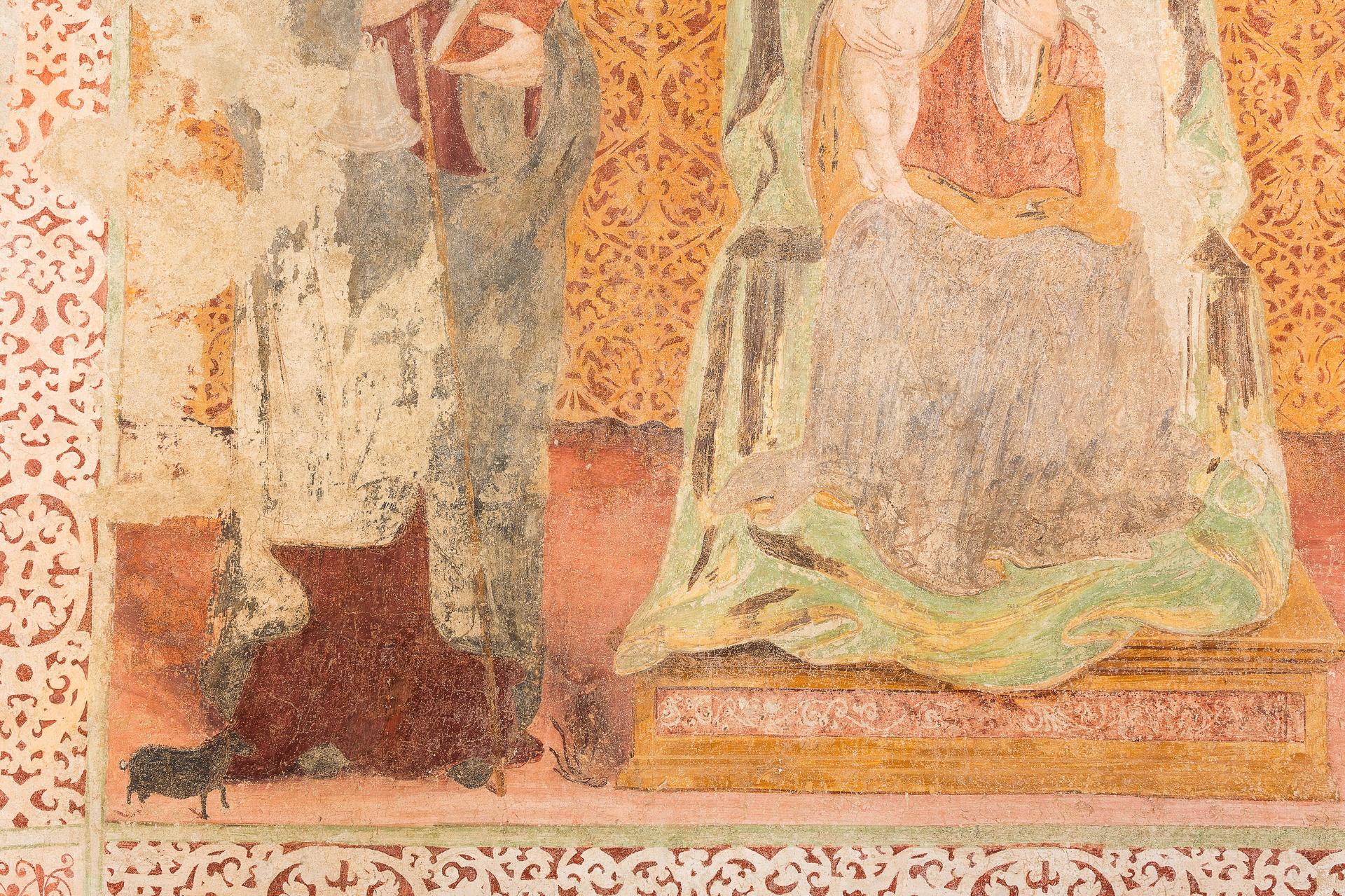 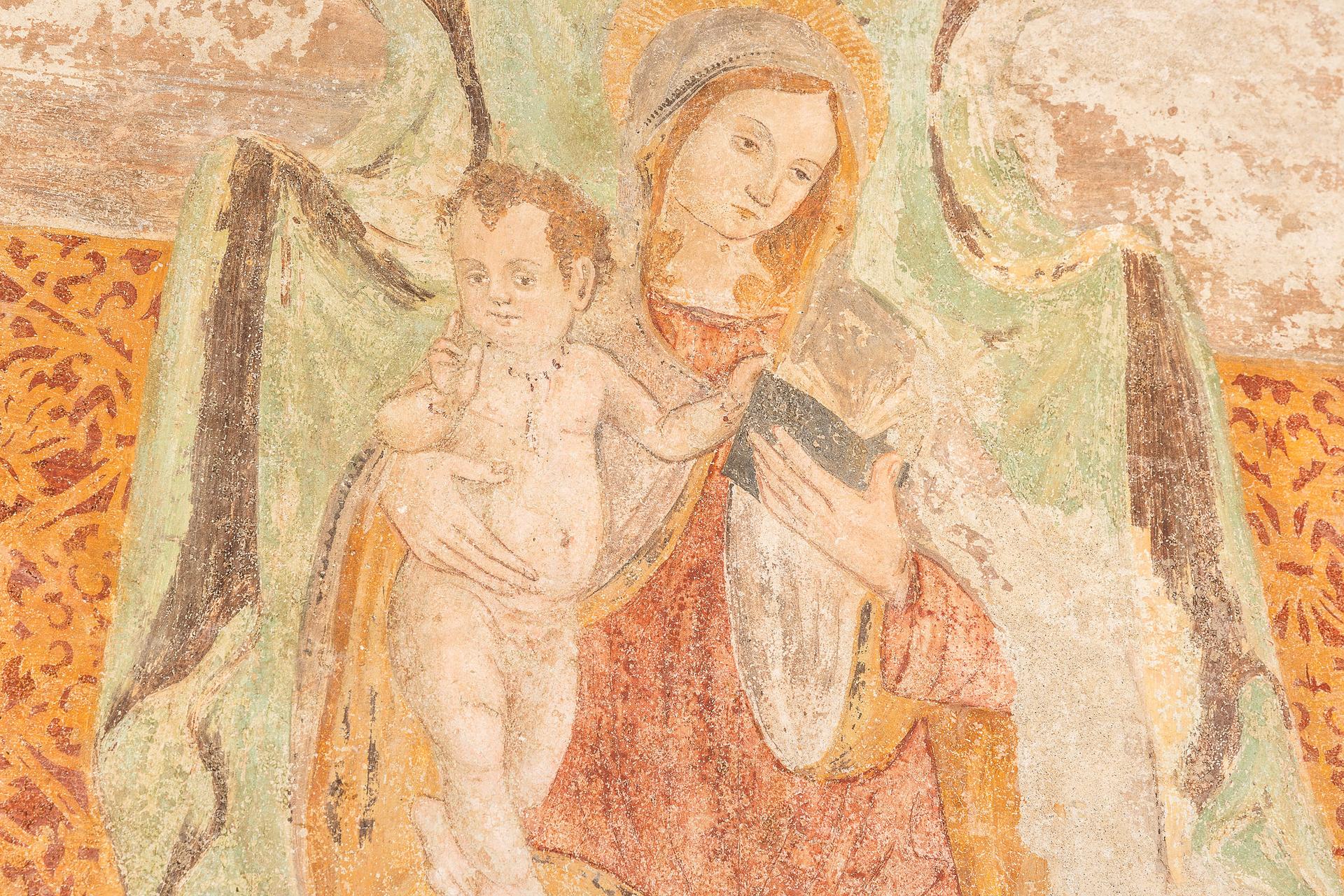 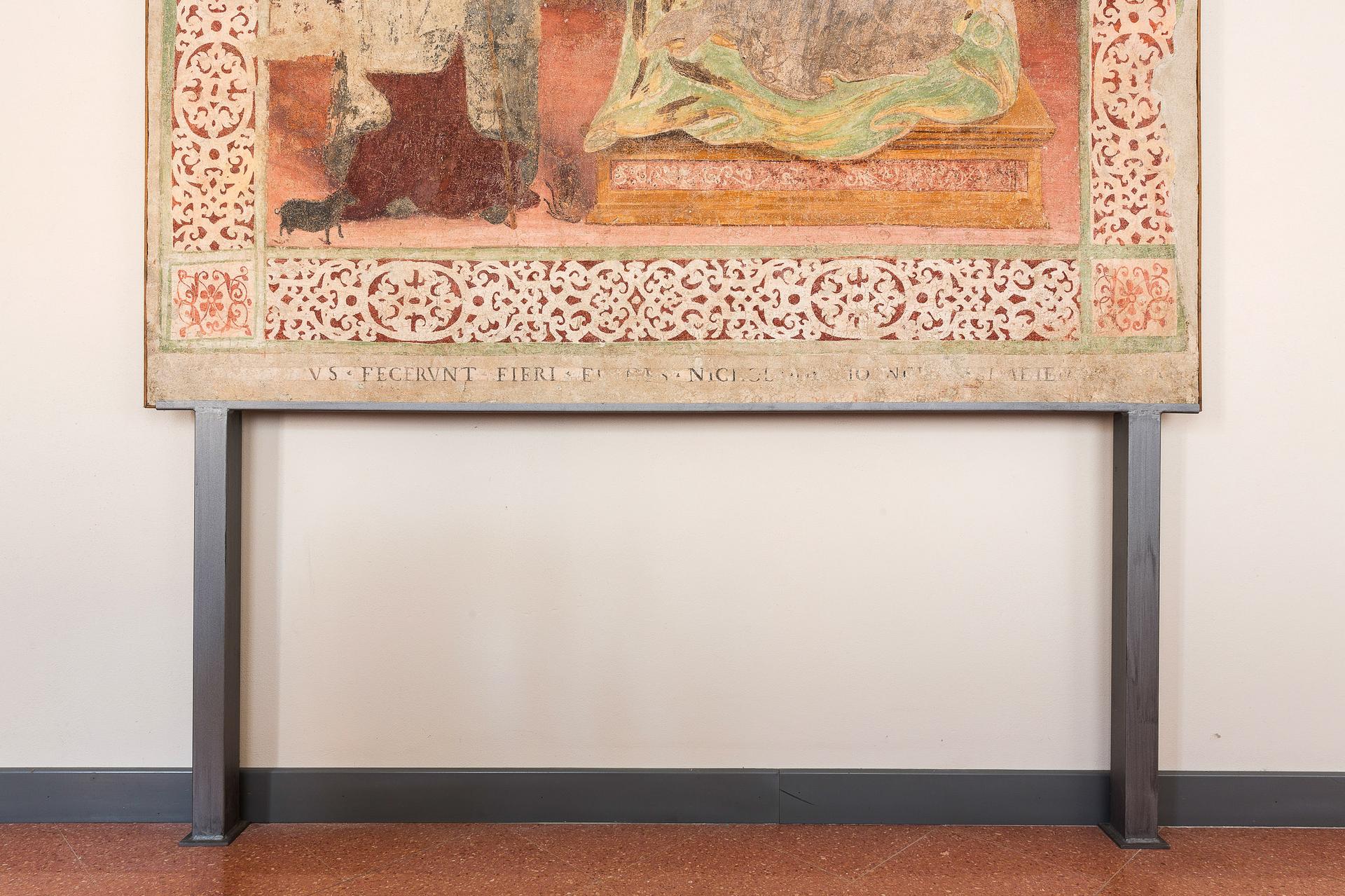