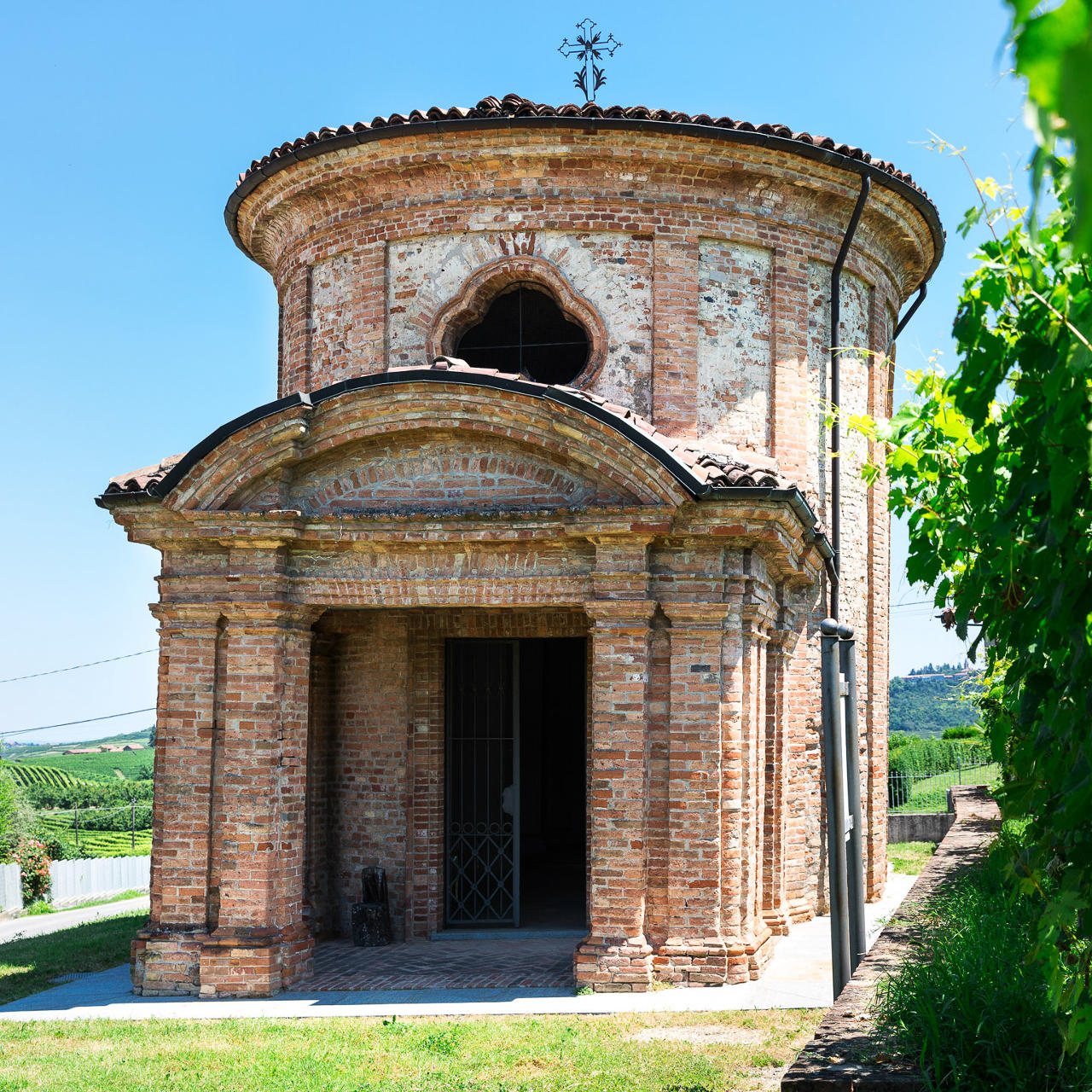 A fresco that hides an unsolved enigma, in a small and precious country chapel

The church of San Bernardo in Castagnito stands at the top of an ancient path between the Tanaro and Borbore valleys. A first construction was born to offer travellers a physical and spiritual point of reference in such a steep and unstable stretch of road. The current building, realised in 1736 following a project by Lawyer Giovanni Carelli from Castagnito, is a very refined example of Piedmontese Baroque architecture, and hides an enigmatic fresco inside.
NEI DINTORNI VEDI I SENTIERI MAPPA SCHEDA TECNICA

A fresco that hides an unsolved enigma, in a small and precious country chapel

Dedicated to the Saint of Clairvaux, the rural chapel of San Bernardo stands at the top and side of the steepest and most encased stretch of the ancient path that connected the Borbore and Tanaro valleys. A first construction arose on site perhaps as early as the thirteenth century by the abbey of San Pietro di Breme, at the time holder of half the lordship of Castagnito. The intention behind its construction was probably to provide travellers with spiritual help on a steep stretch of road, far from inhabited zreas and on an extremely unstable territory. 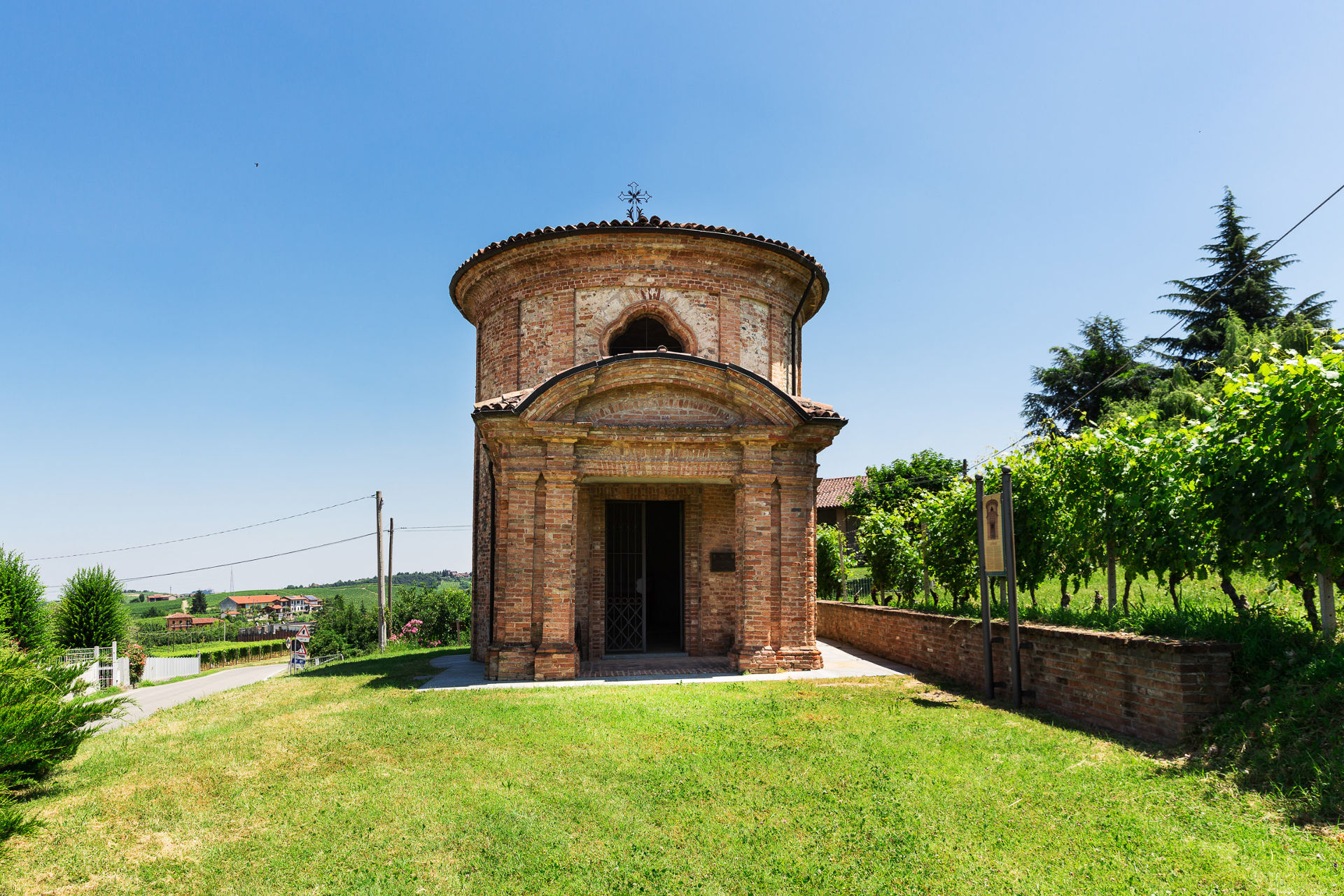 The first historical reference dates back to 1509, when San Bernardo is mentioned in the form of a toponym concerning the division of the territory. For a reference to the building itself, it is necessary to wait until 1597: the visiting bishop Aiazza reports the bad condition of the walls, scourged by humidity, and of a peculiar icon (now disappeared) of a Virgin Mary nursing Saint Bernard, considered indecorous for the era. In 1659, 2000 bricks were purchased to rebuild the chapel portico.

Thanks to restoration works financed by alms, the state of the chapel improved until at least the early 18th century. It was in this period, in 1732, that the need of demolition and reconstruction was established, as the chapel had fallen “in a bad state and threatening ruin”. Moving to a more appropriate place was also suggested: the hill on which the church stands rests on a local aquifer and is harassed by landsliding, a factor that has probably compromised the safety of the floor and the supporting pillars more than once during centuries.

Despite the indications of the experts called to survey the place, the new sacred building was erected between 1735 and 1736, but not far from the previous one, causing that characteristic inclination that is still visible today. In any case, in 1737 the “internal establishment” of the church and its “stucadura” were carried out and the work was completed. On a visit thirty years later (1768) by the Bishop of Asti Caissotti, the chapel must have appeared in good condition and elegant in structure. Unfortunately, already in 1845, only a century after the reconstruction, it was reported as compromised by humidity, with the internal wall devastated. Also in this document the “scandalous” icon of Bernardo suckled by the Virgin is mentioned, which had already been reported two centuries earlier by the visiting Bishop.

The current building is a very refined example of Piedmontese Baroque architecture. The chapel has a very simple layout, with a central plan and a delightful terracotta pro-naos. In ancient times there was also a valuable portal, but it was stolen about a quarter of a century ago. The project is due to the architect Capelli from Castignito, with the expertise of the engineer Castelli from San Damiano.

FRESCO OF THE VAULT: THE CROSS PATTÉE (about 1737)

Noteworthy is the vault of the chapel, and even more peculiar is the mysterious eighteenth-century fresco, by an unknown artist, which adorns the apse vault. Much of the scene has unfortunately been lost, and the fragment that has come down to us offers a never solved enigma. 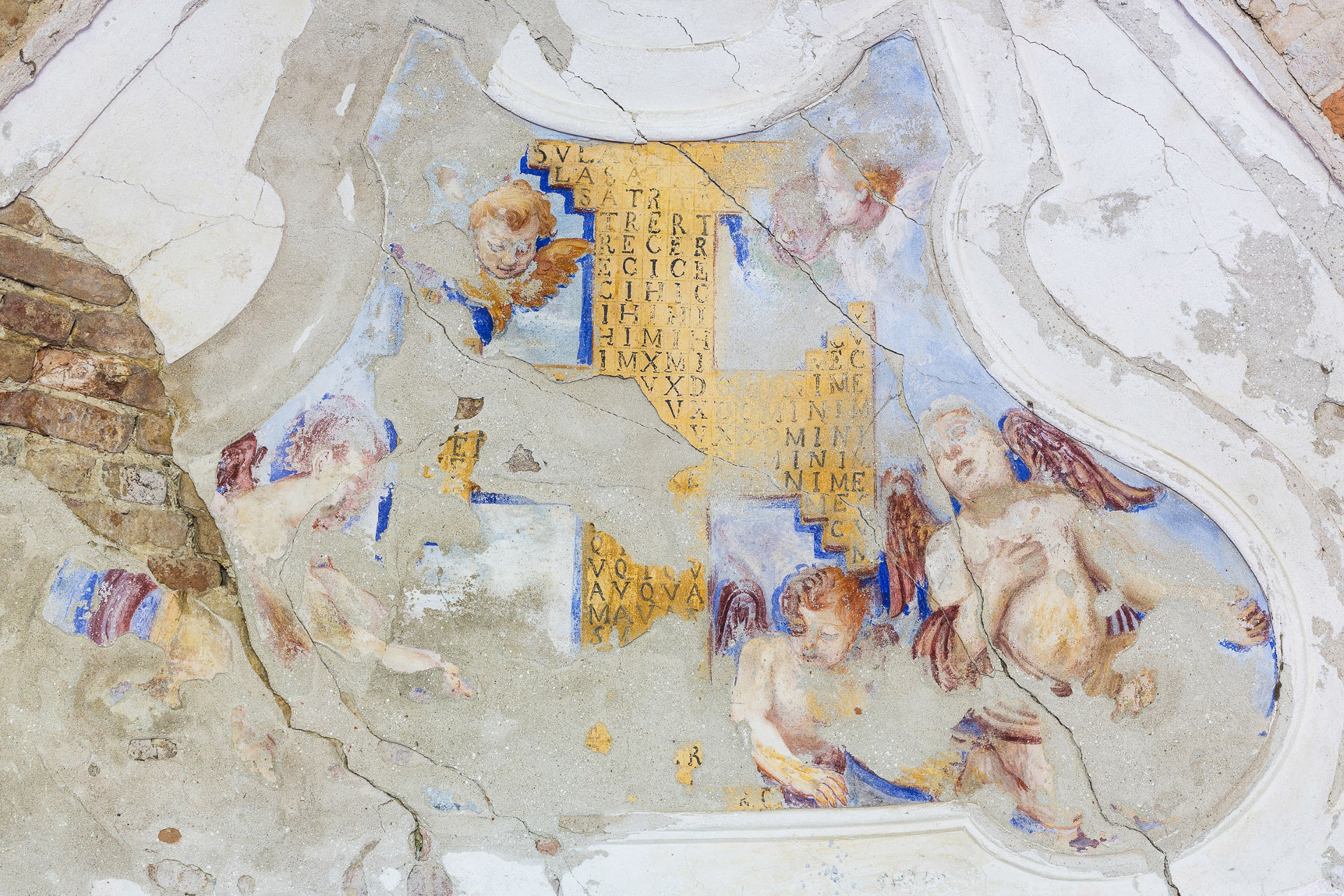 On the vault of the apse we can observe some angels holding a cross pattée, that is a cross whose arms extend outwards.

Inside the cross there is a mysterious epigraph that is only partially legible, consisting of a sequence of letters partly palindrome, that is, with a double reading sense.

Only some words present in the transverse arm make sense (LUX DOMINI ME…), while the rest seem to be written with some kind of logical recurrence, but so far no one has ever come to terms with it. Only Baldassarre Molino in 2011 published the transcription, but without a complete reading possibility. What do they want to mean? 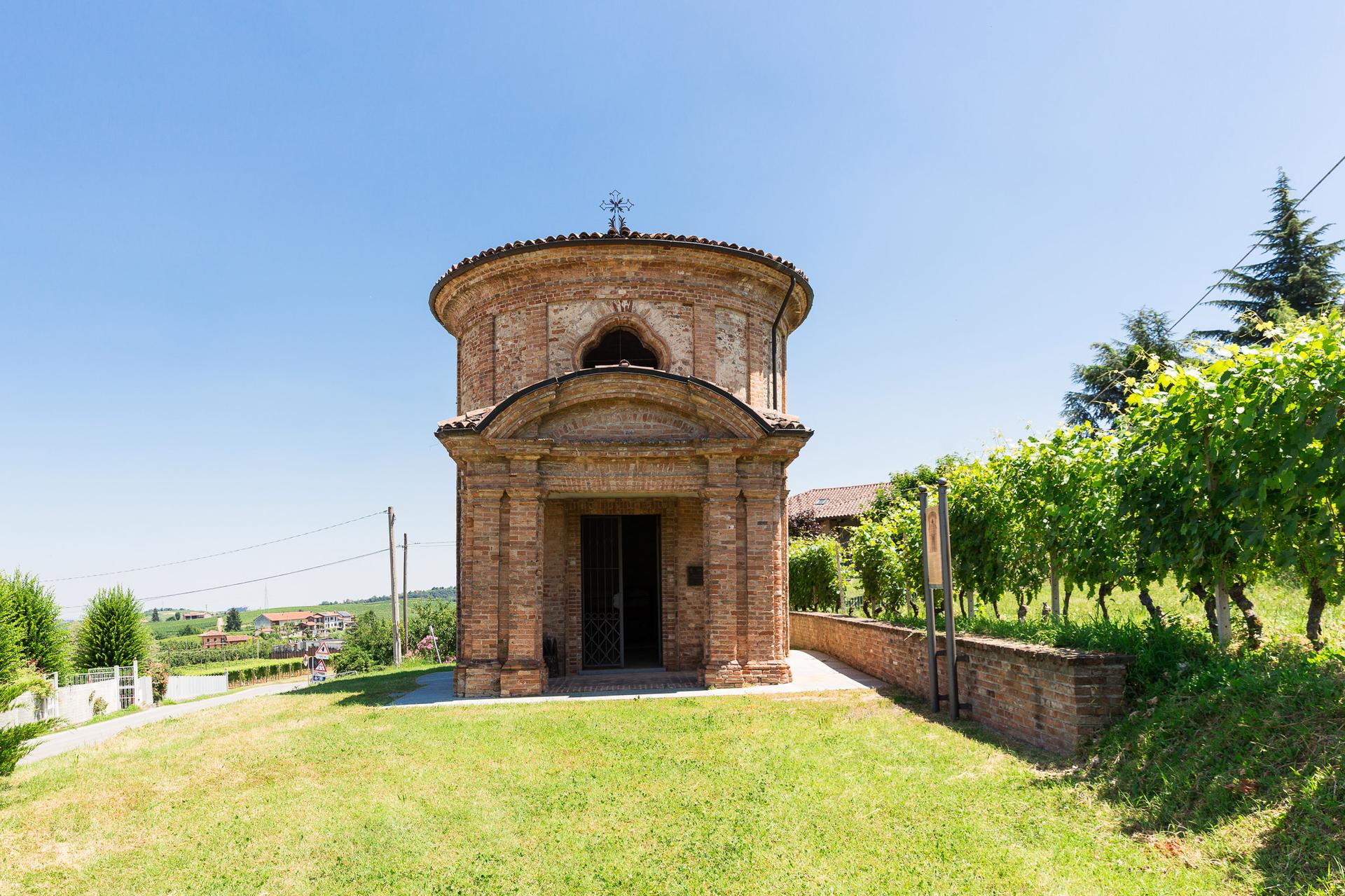 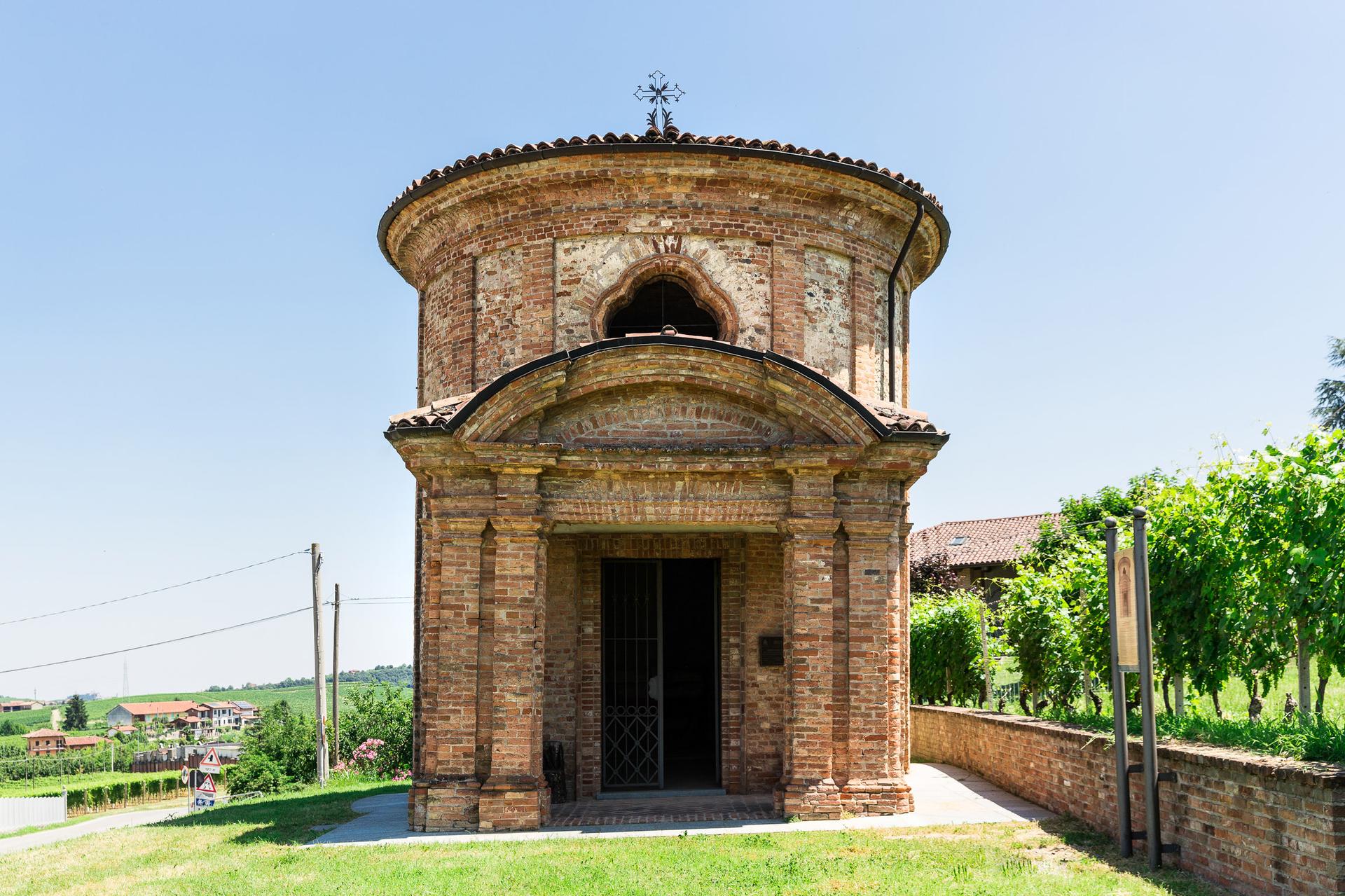 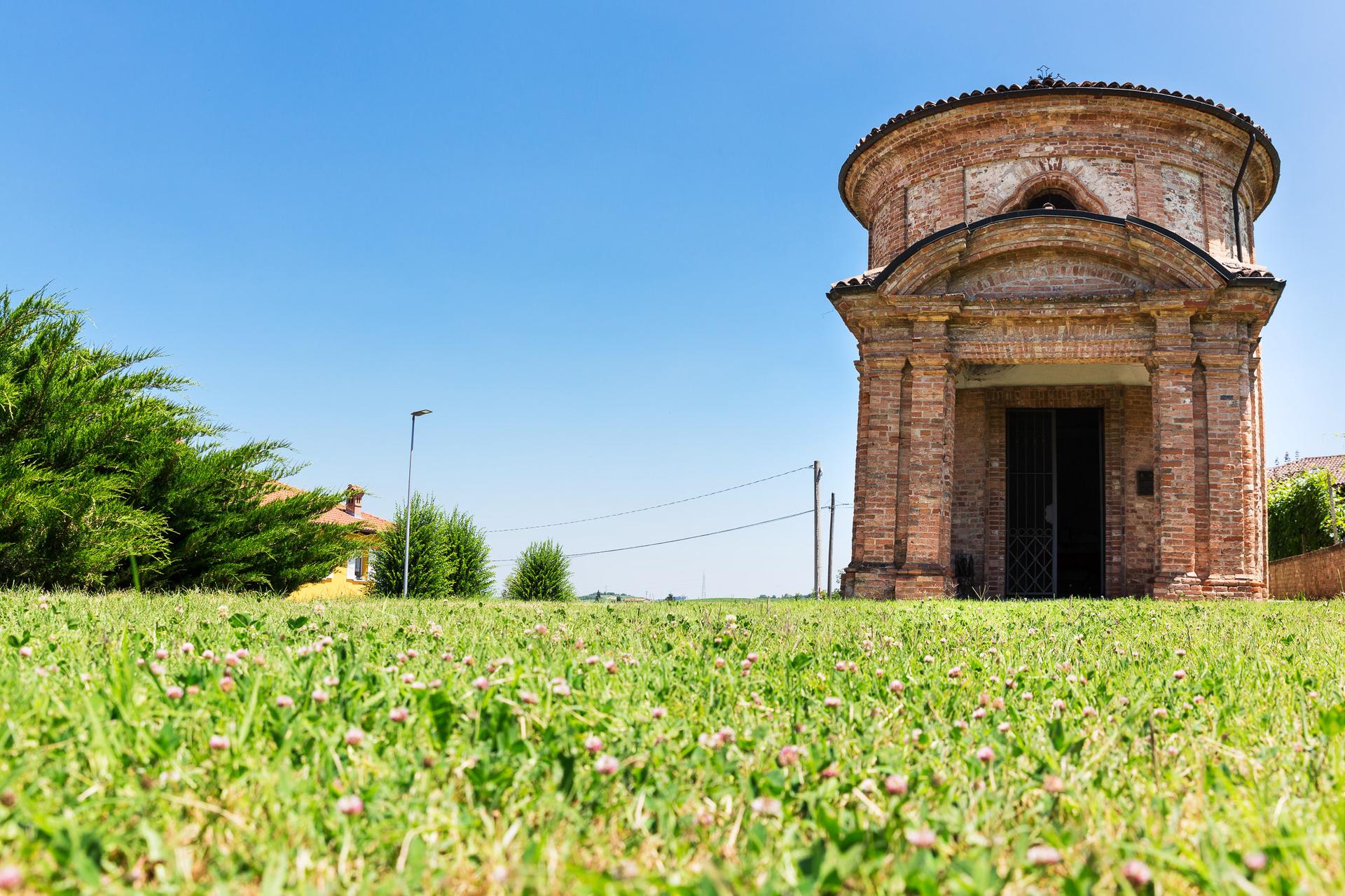 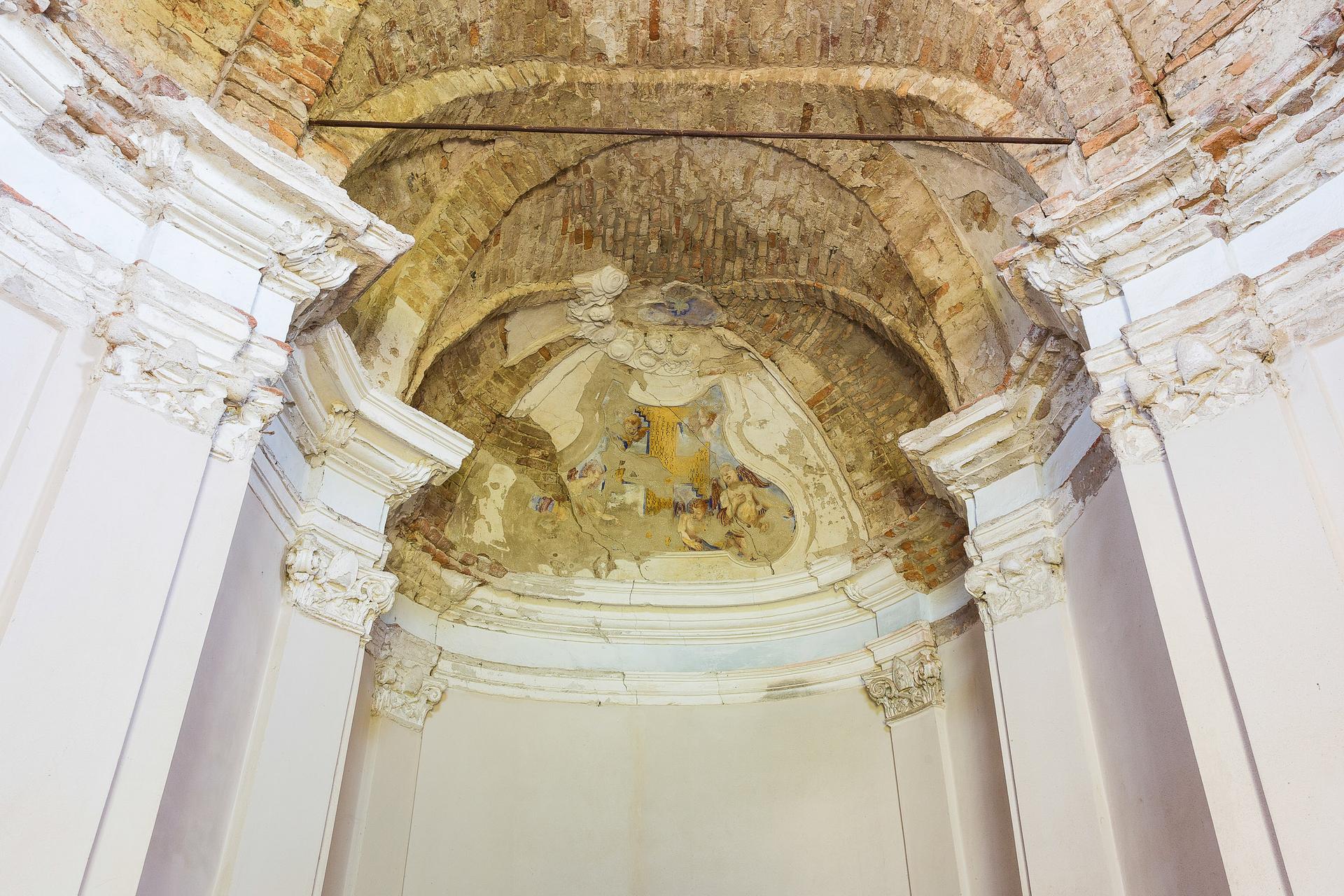 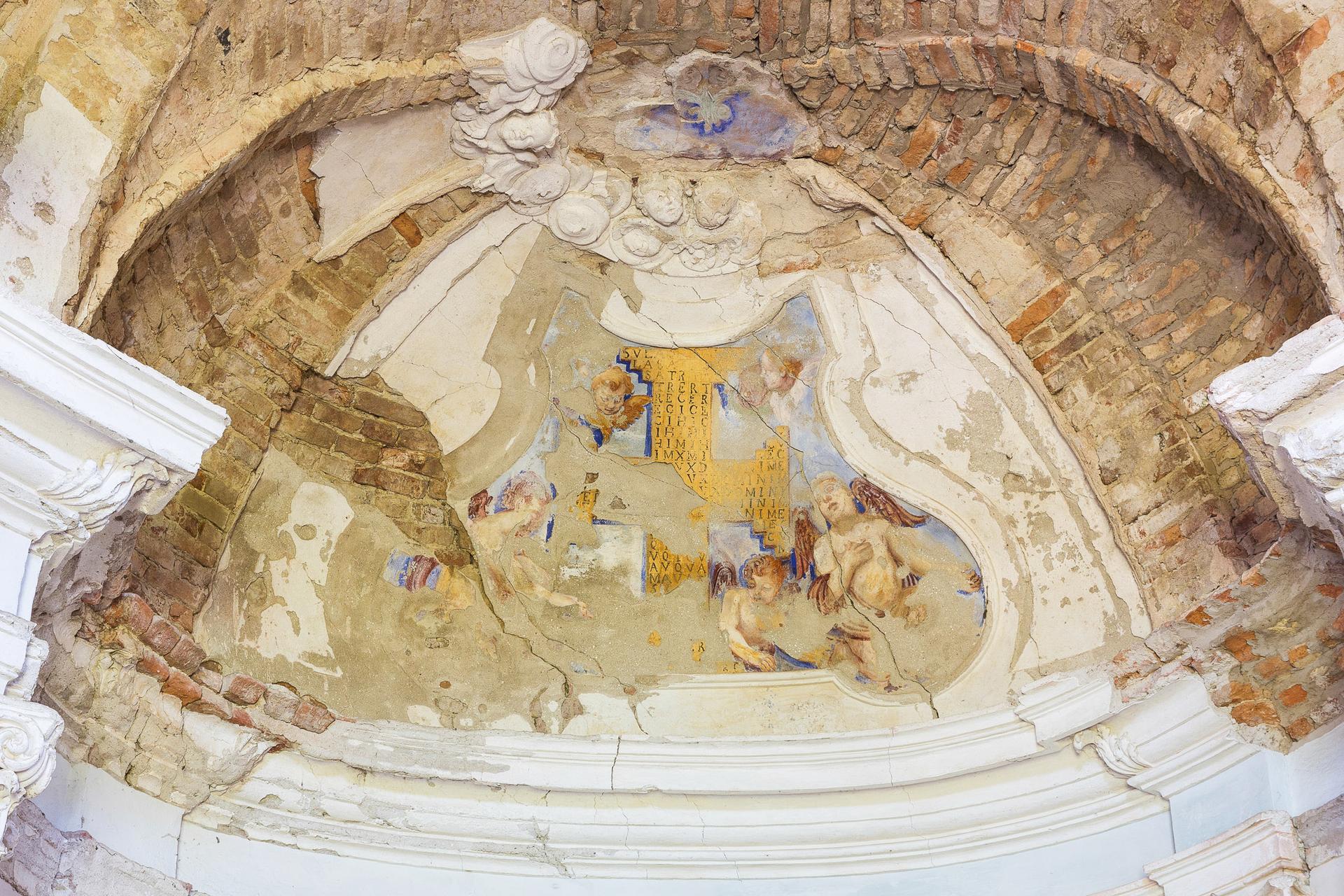 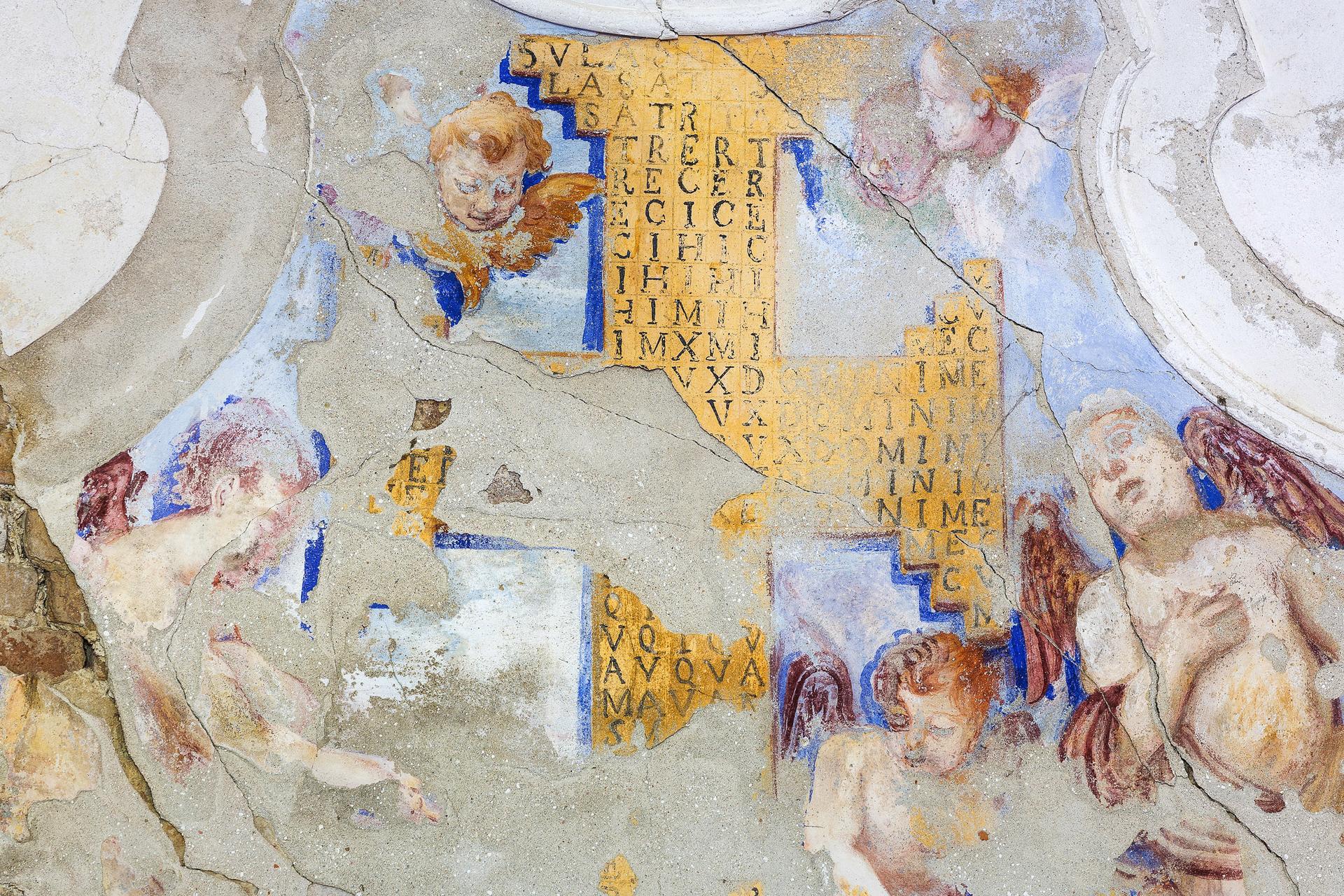 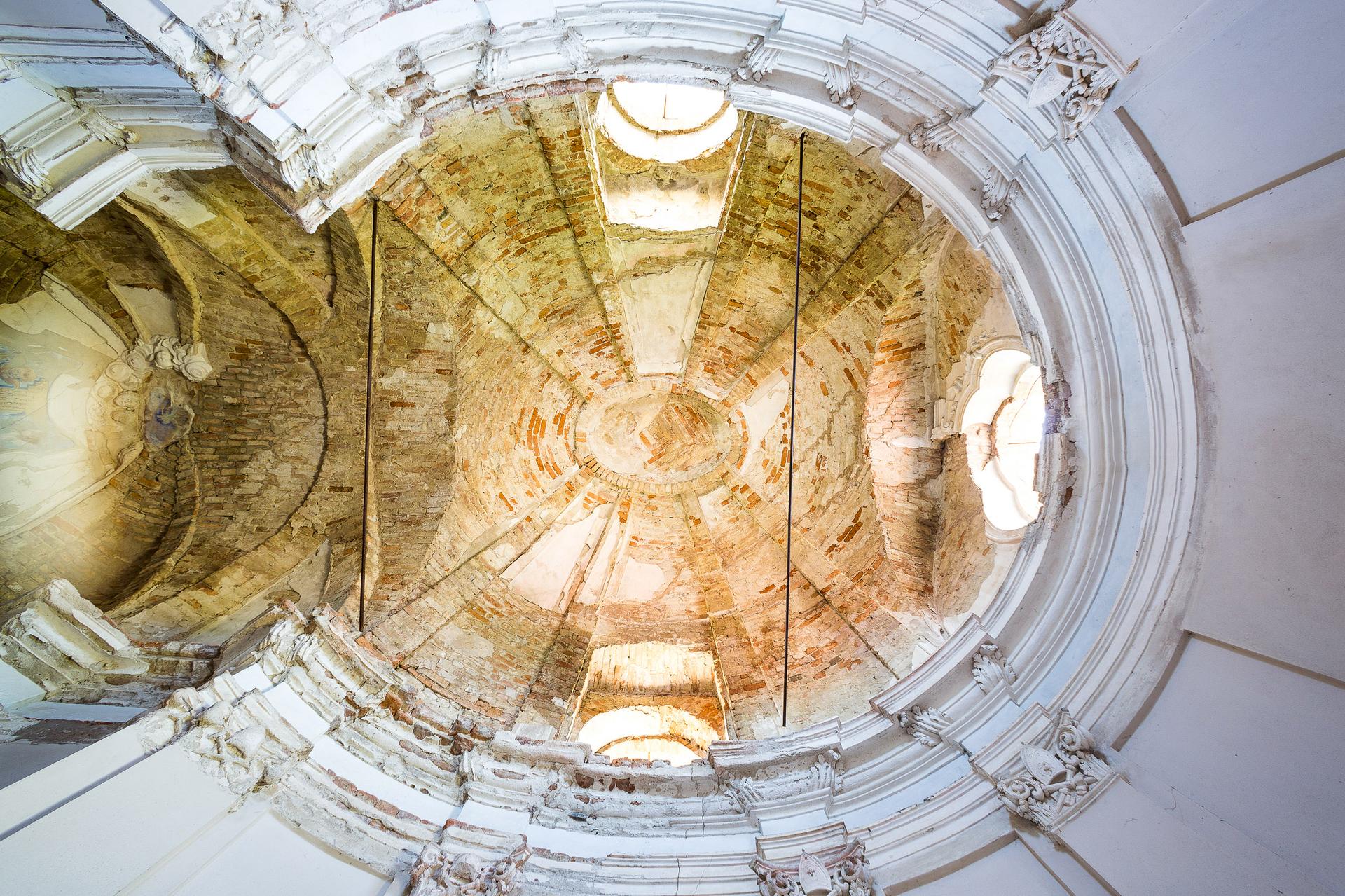