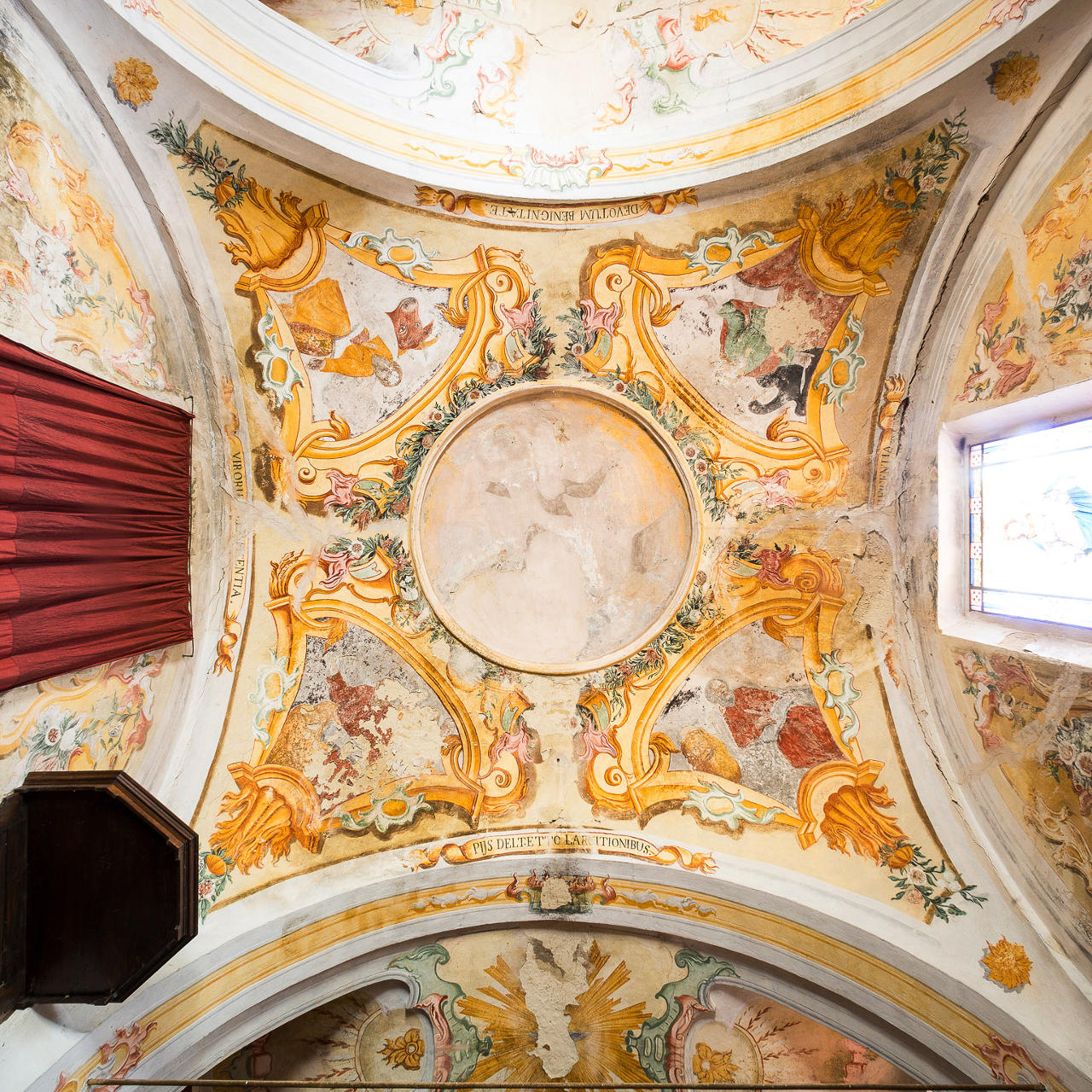 The church of a lost medieval “villa”, with precious and inedited Baroque frescoes.

Located on the top of a hill in the territory of Santo Stefano Roero, the rural chapel of San Michele Arcangelo overlooked the lost village of Anterixio, before its destruction by the troops of Asti. It was rebuilt by the locals at their own expense in 1729, and its vaults house marvellous and inedited eighteenth-century frescoes.
NEI DINTORNI VEDI I SENTIERI MAPPA SCHEDA TECNICA

The church of a lost medieval “villa”, with precious and inedited Baroque frescoes.

Formerly located on the top of a hill in the territory of Santo Stefano Roero, the rural chapel of San Michele Arcangelo, probably of Lombard foundation, overlooked the town of Anterixio (or Anterisio), before its destruction in 1256 by the people of Asti.

The place has been known since 1041, when Henry III the Black entrusted the building to the Church of Asti. After the destruction of Anterixio the church was still confirmed to the canons of the Asti Chapter, who already owned it in 1165. From the seventeenth century it fell into decay, until its interdiction in 1717. It was rebuilt by the locals at their own expense. The current building dates back to 1729 and has been a National Monument since 1919. 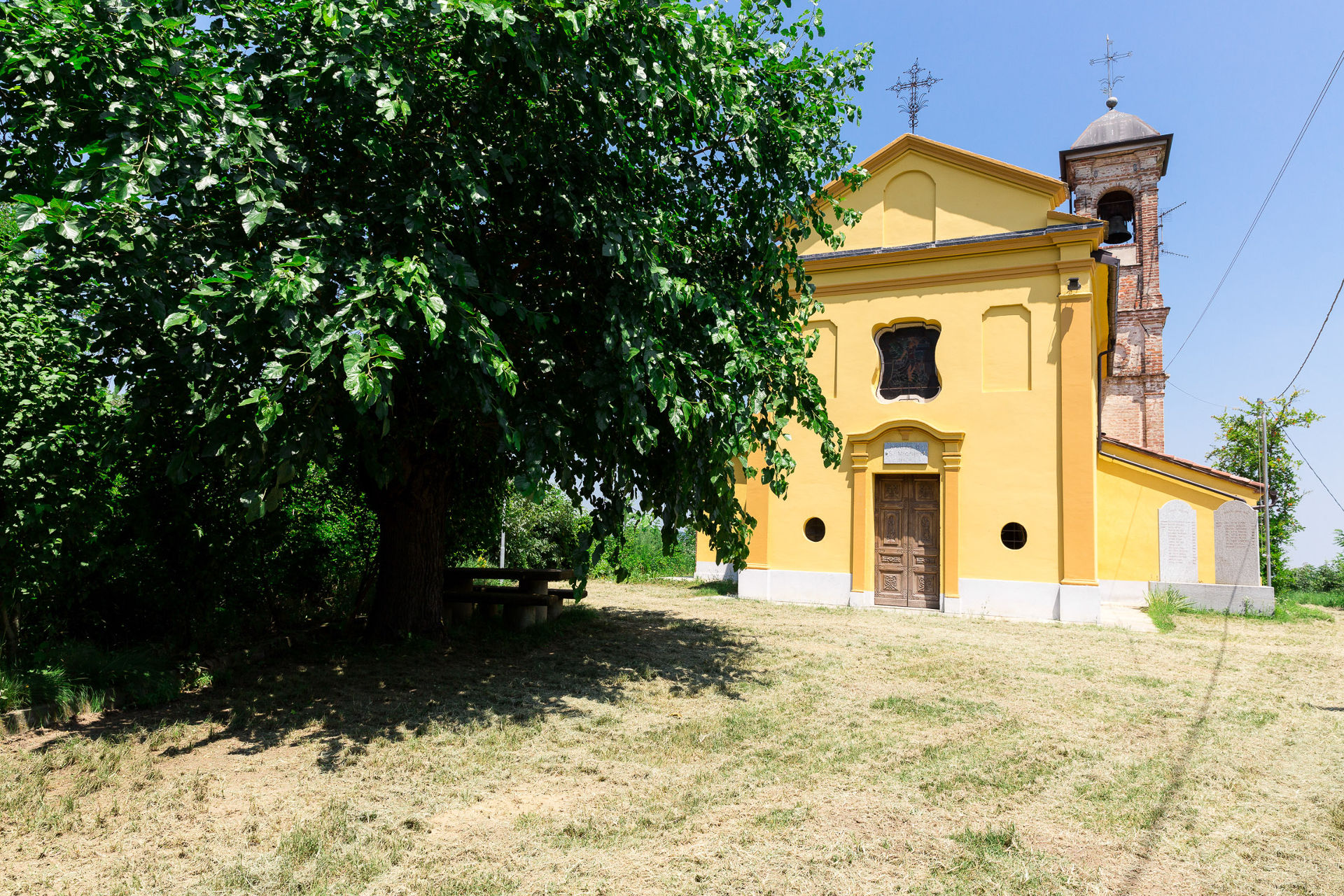 The façade has simple lines, with two pilasters supporting a pseudo-trabeation and a broken tympanum. The bell tower is leaning against the southern side.

The church has a longitudinal nave plan, a rectangular plan with a chapel on the left side dedicated to the Virgin and containing a valuable eighteenth-century wooden altar. On the right side, the sacristy flanks the main body.

The nave is illuminated by three openings on the right wall and by a fine and sinuous window with a mixtilineal design on the facade. The barrel vaulted with lunettes has a large central sail and ends in a rectangular presbytery with rounded corners, with a barrel vault.

All the vaults are decorated with eighteenth-century frescoes of good quality, although partially degraded. The execution could date back to 1729, with some retouching or completion at a later date.

FRESCOES OF THE VAULT: THE EVANGELISTS (about 1729)

In the four pendentives of the central sector of the vault, like a dome, we can distinguish two Evangelists, whom we recognize in the act of writing the Good News with their symbolic animal behind them. They are Marco, with the Lion behind him, and Luca, with the Ox behind him. In the third sector the fresco has deteriorated, but the animal is visible: an eagle, the symbol of John. The fourth ruined plume, consequently, must have represented Matthew. 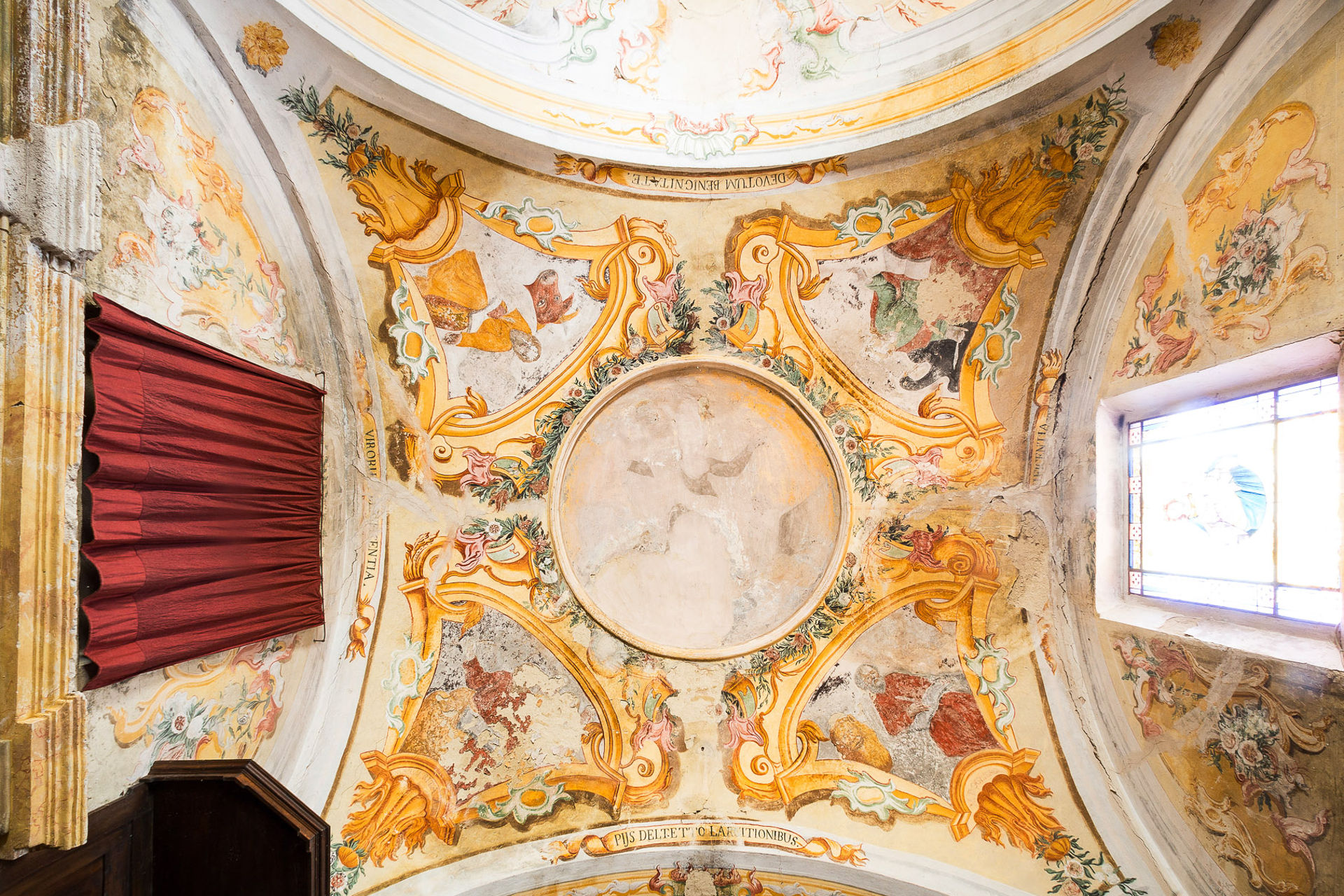 The Evangelists are inscribed in fake architectures of good workmanship with plant elements, and surround a central space which unfortunately is completely deteriorated. A few lines can be glimpsed, perhaps the base of a representation of St. Michael the Archangel, to whom the church is dedicated. 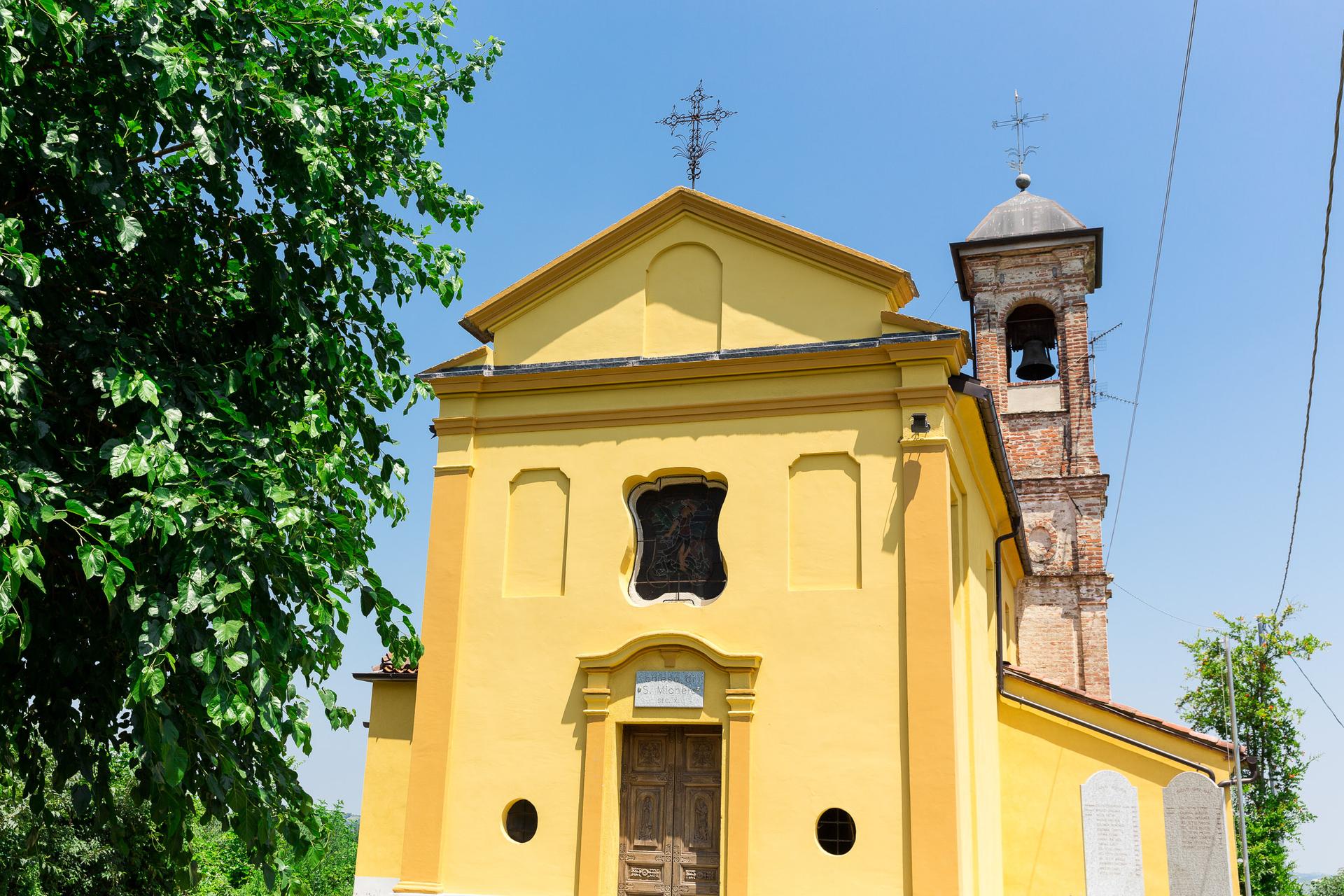 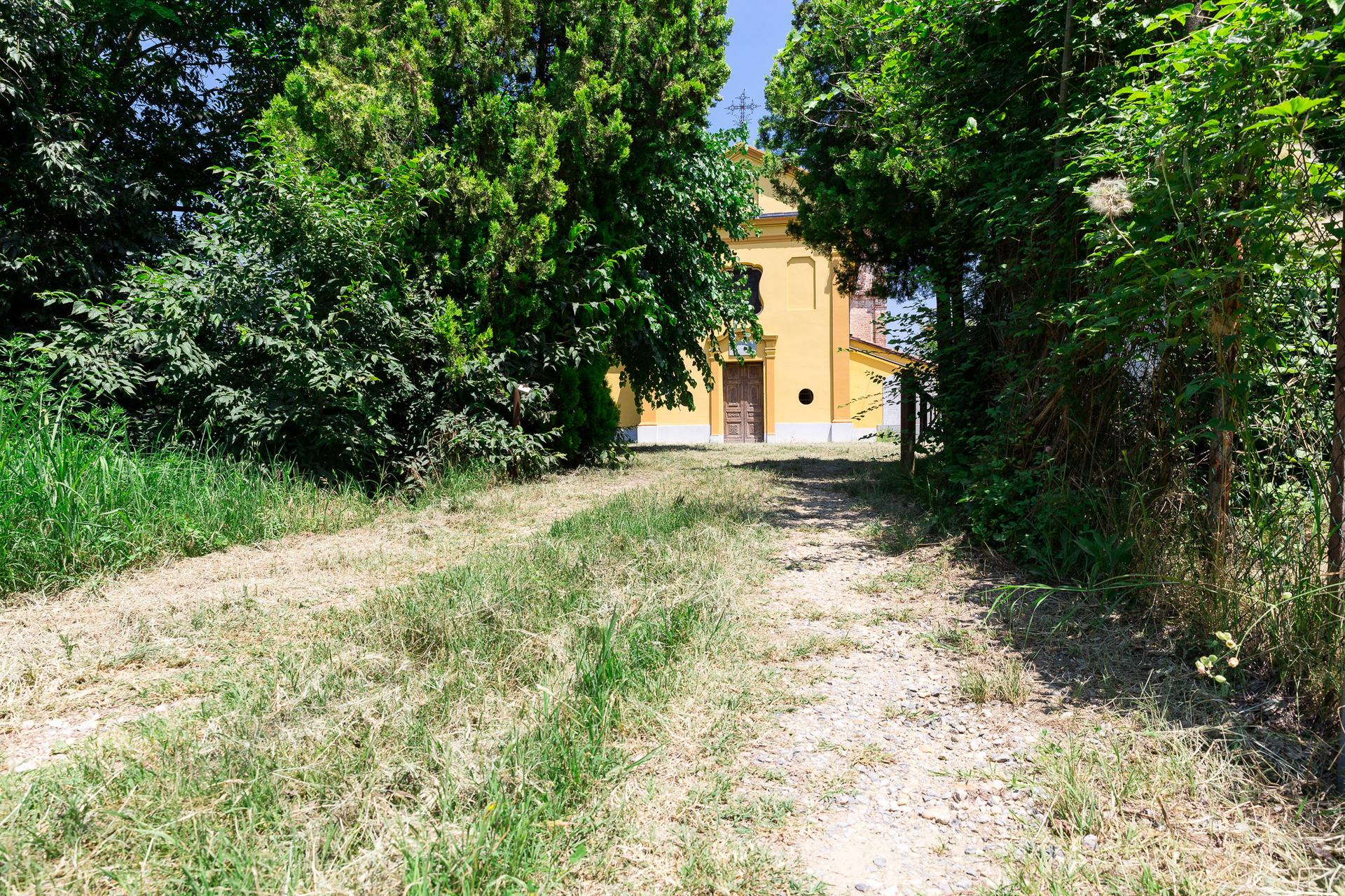 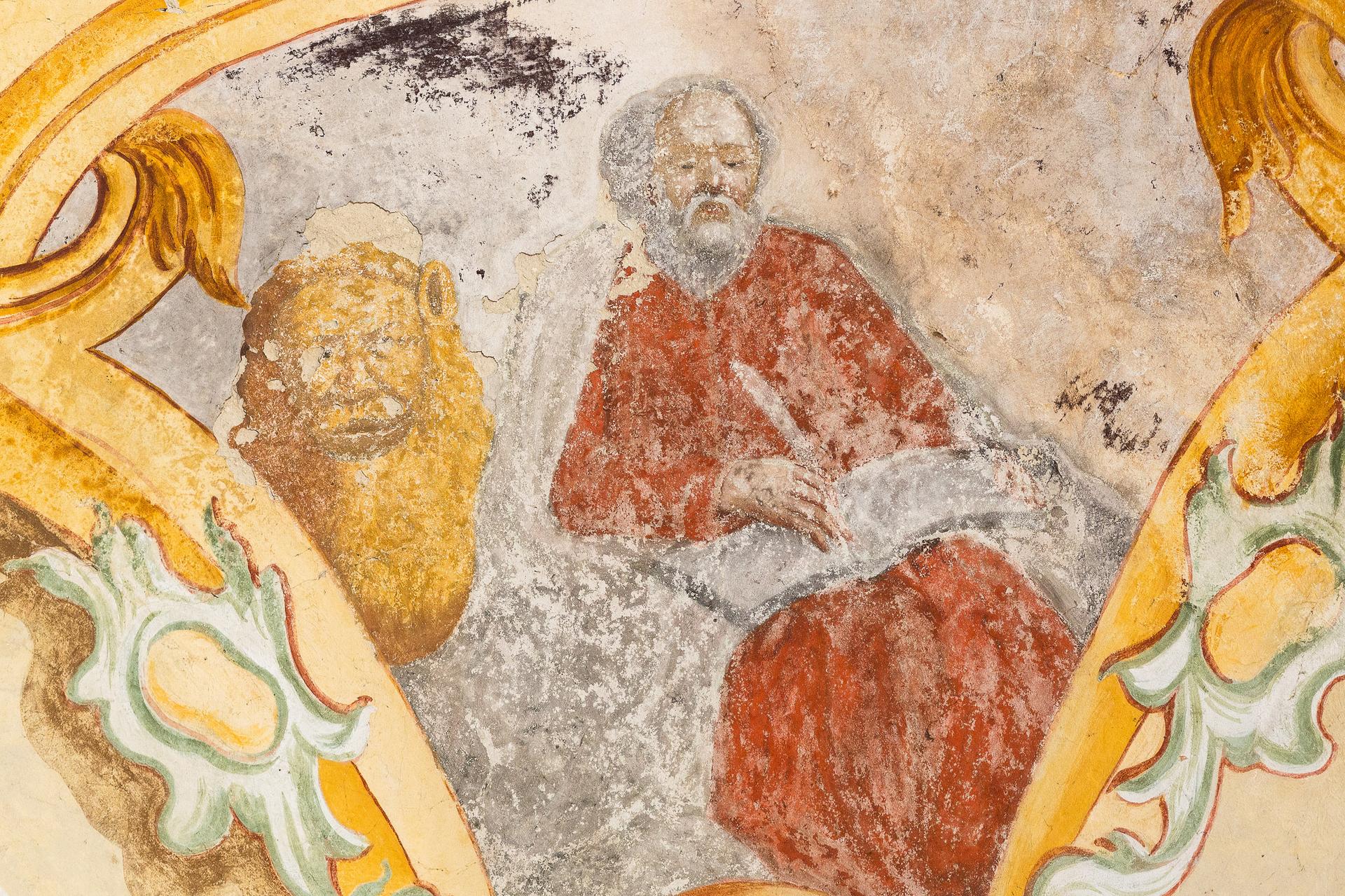 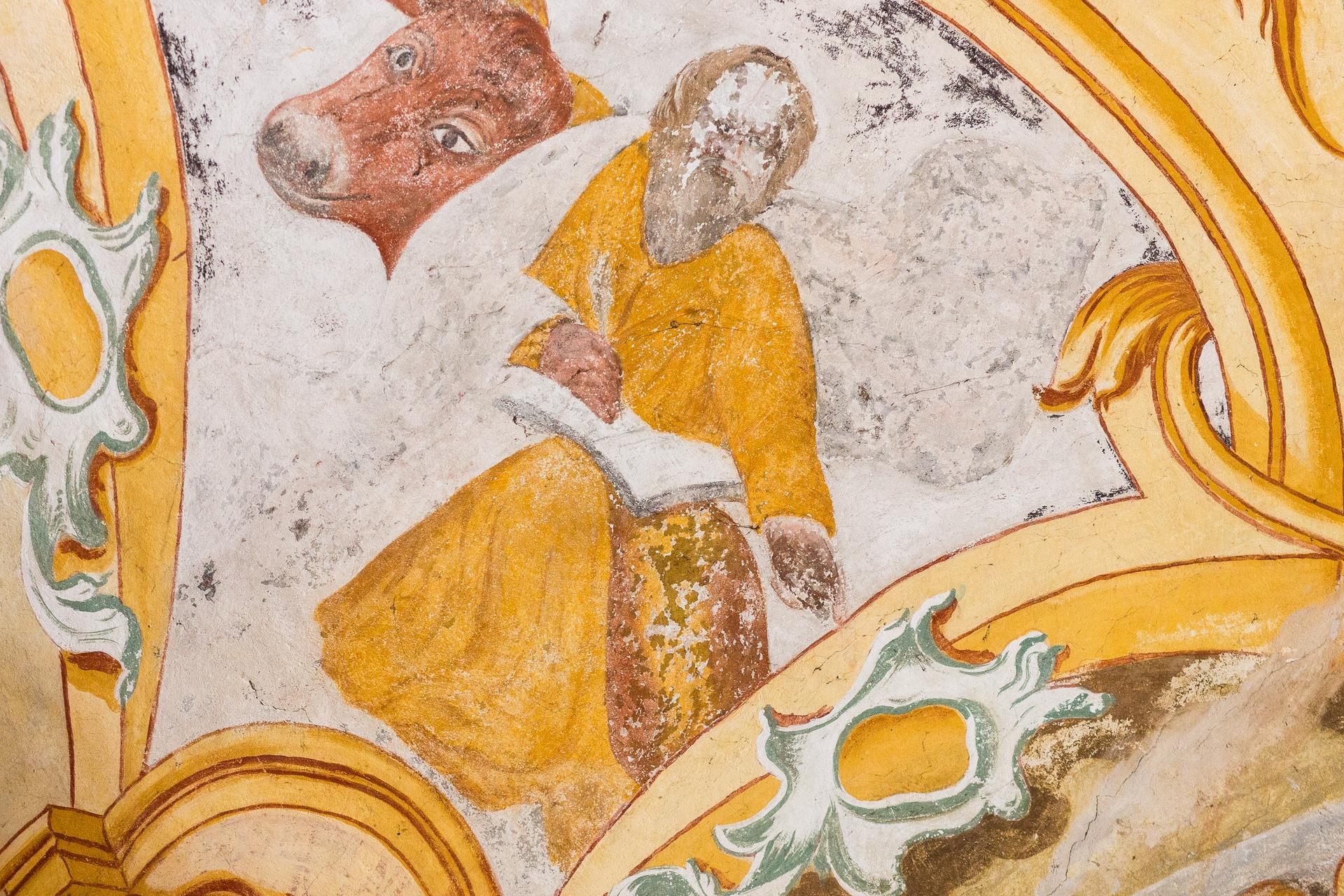 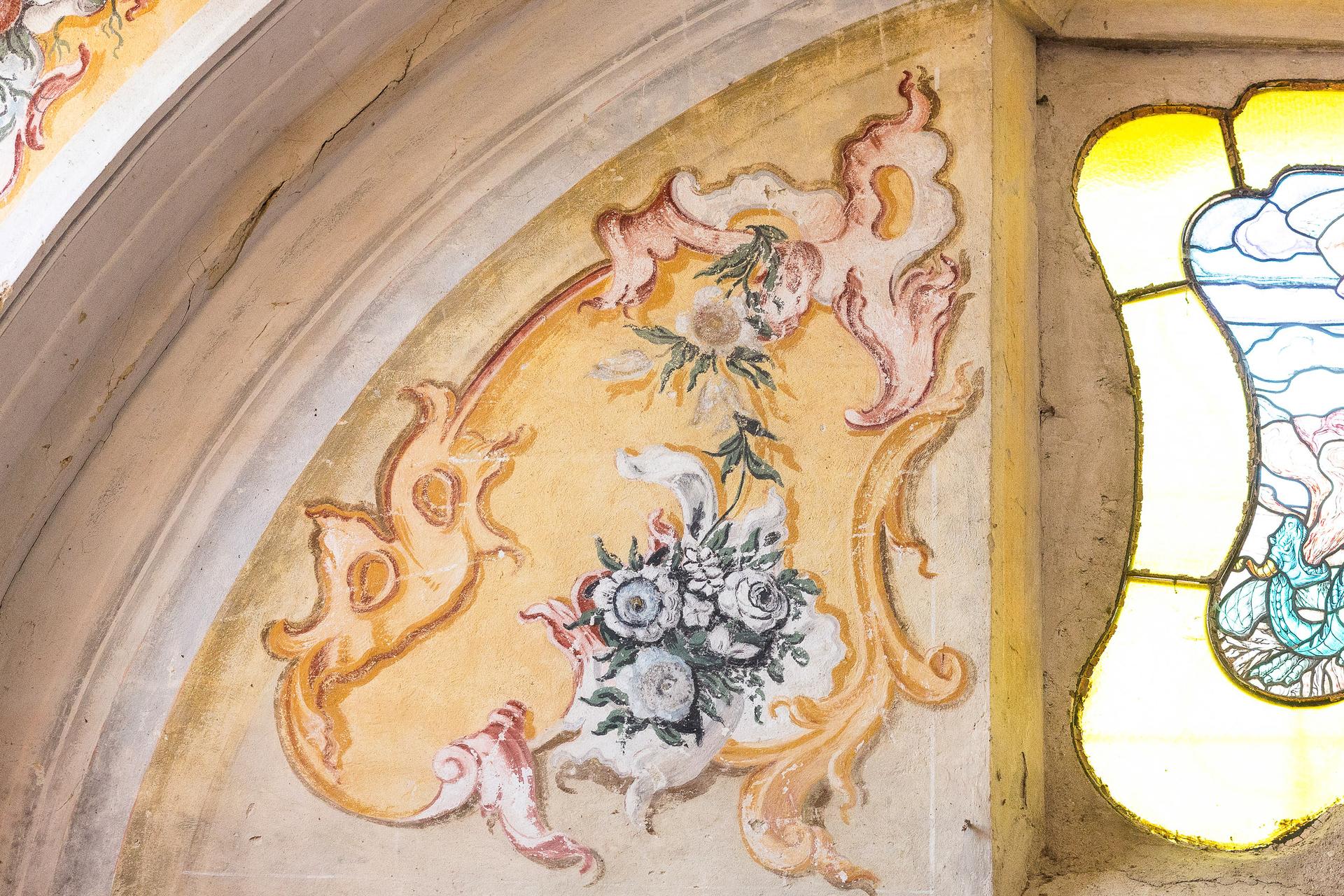 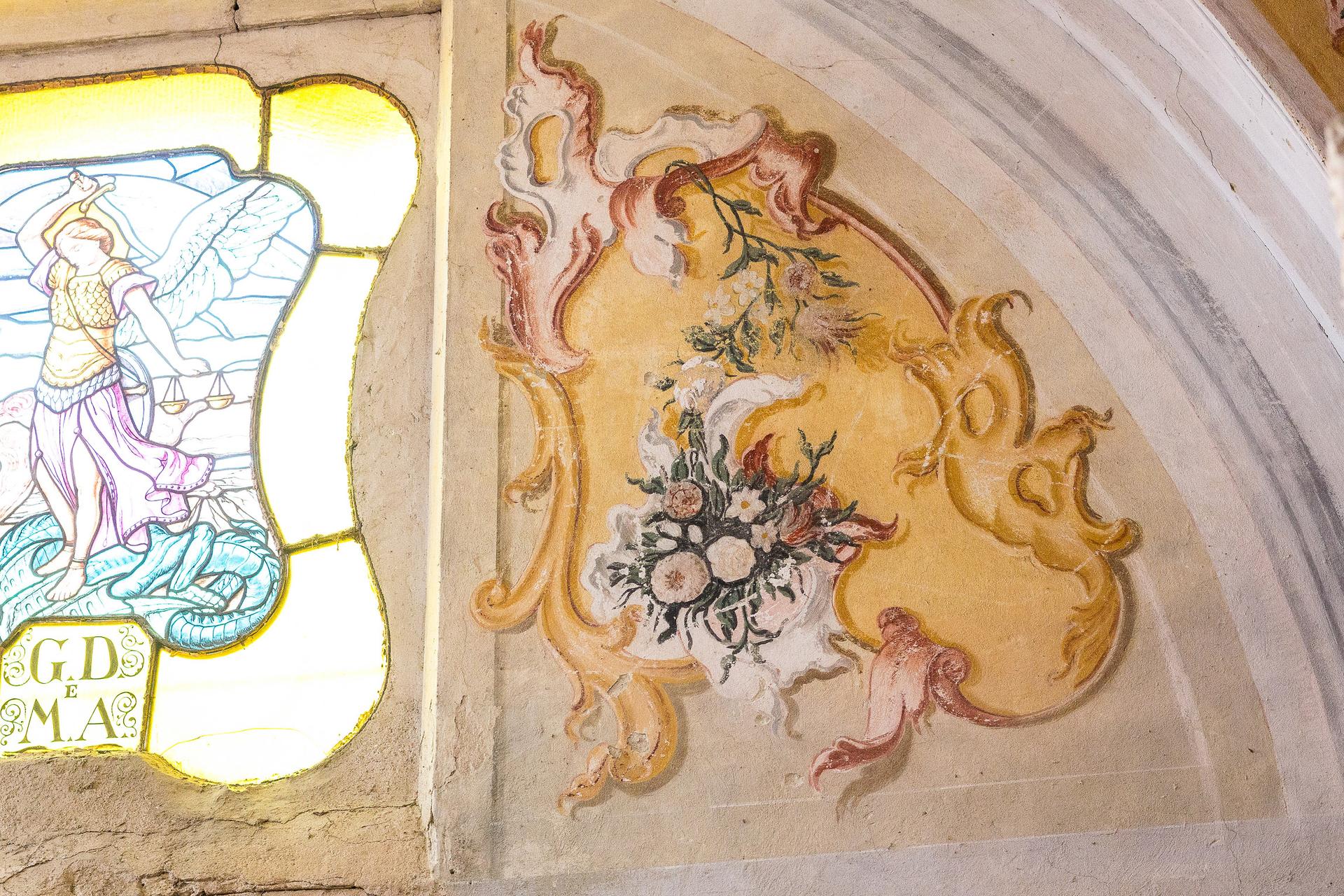 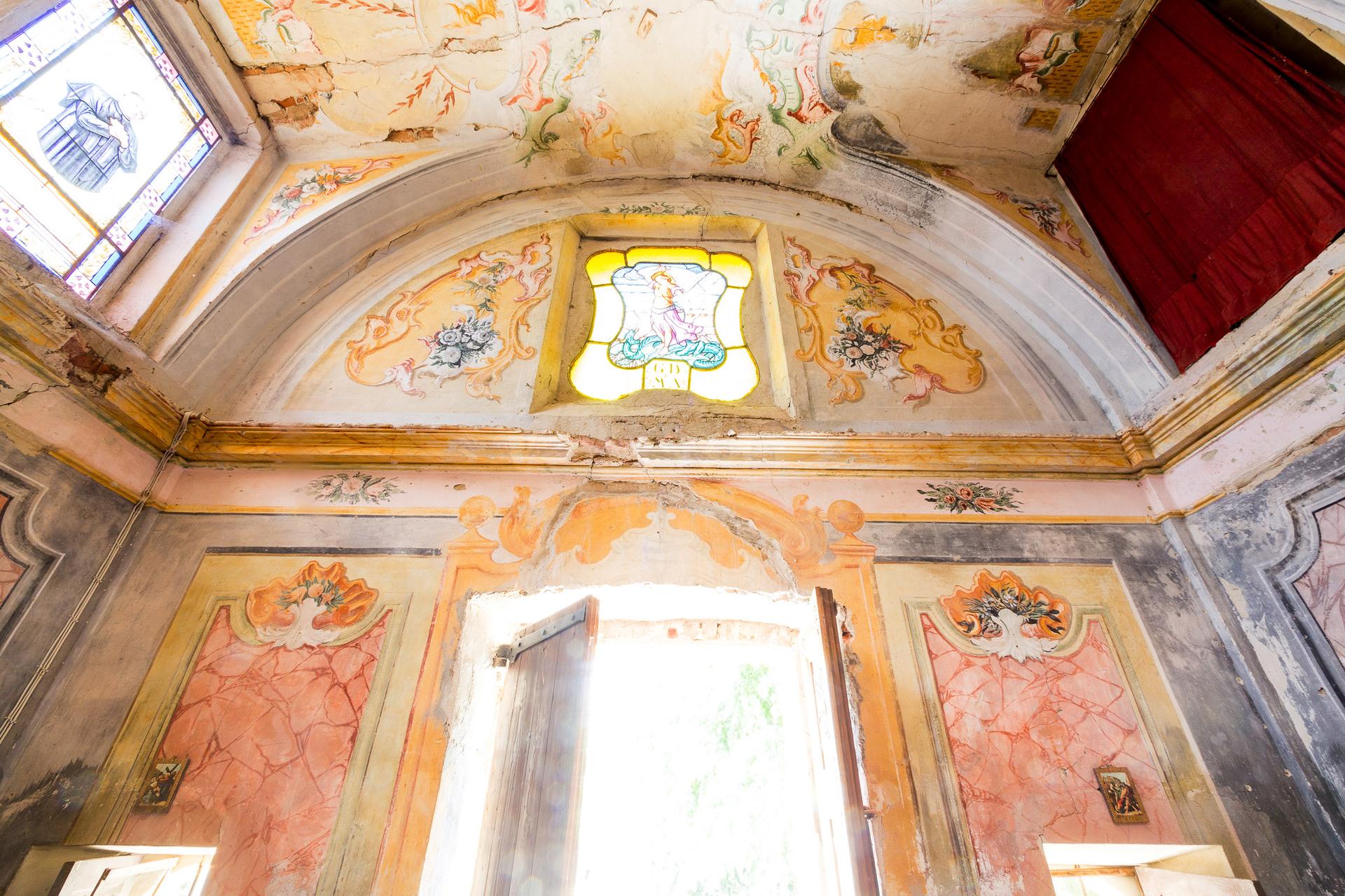 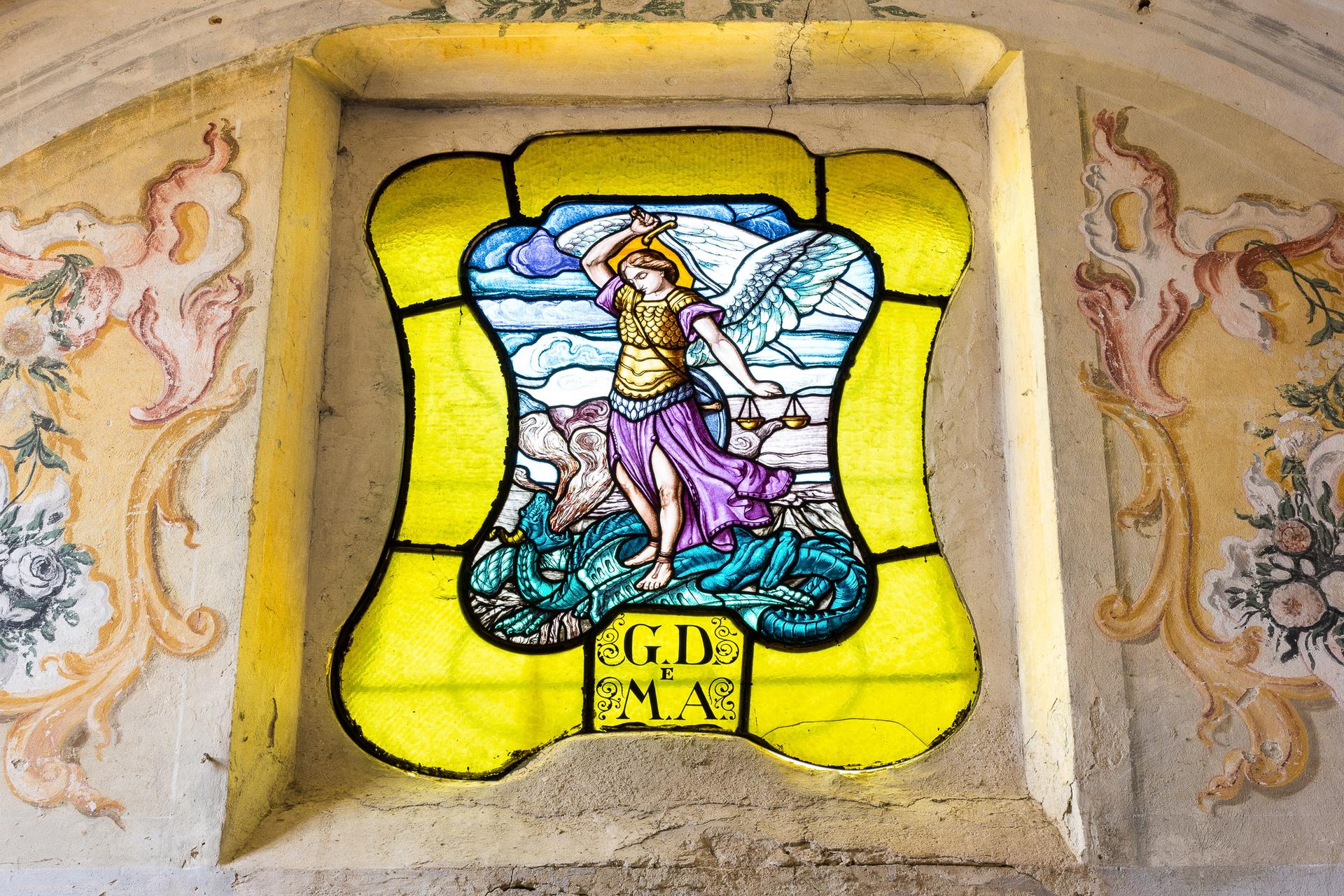