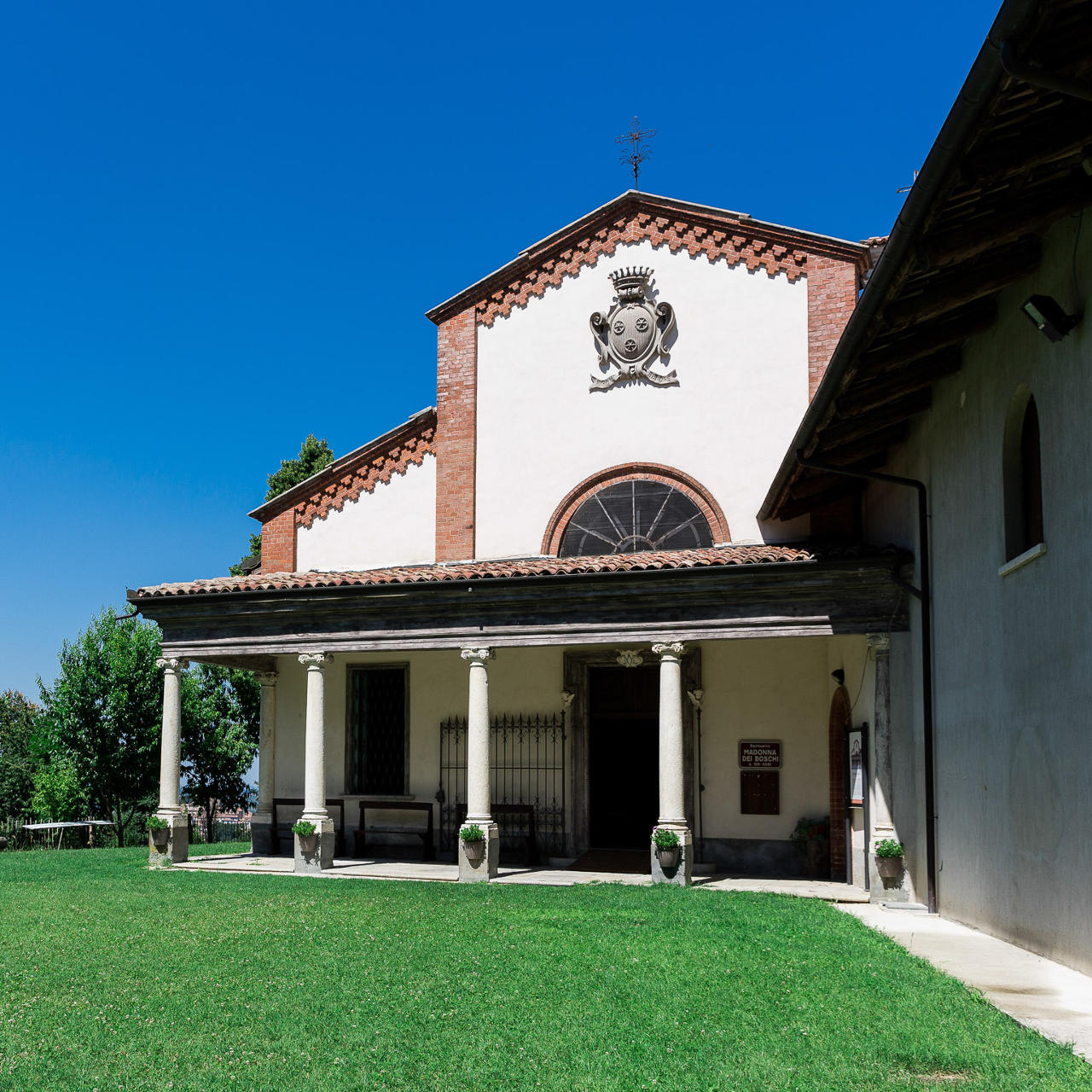 Who was the Master who painted this fresco mysteriously hidden from view?

The Sanctuary of the Madonna dei Boschi, located on the top of a hill, houses in the attic a very precious late Gothic fresco of the Annunciation. A work of still unknown origin, almost certainly commissioned by the Roero family of the last quarter of 15th century. It was restored in 2003, but it is still hidden and difficult to access, a fact that enriches its vision with an almost mysterious atmosphere.
NEI DINTORNI VEDI I SENTIERI MAPPA SCHEDA TECNICA

Who was the Master who painted this fresco mysteriously hidden from view?

The rural Sanctuary of the Madonna dei Boschi is located on the top of a hill clearly visible from the romantic road between Valle Sanche and Valle Maggiore. 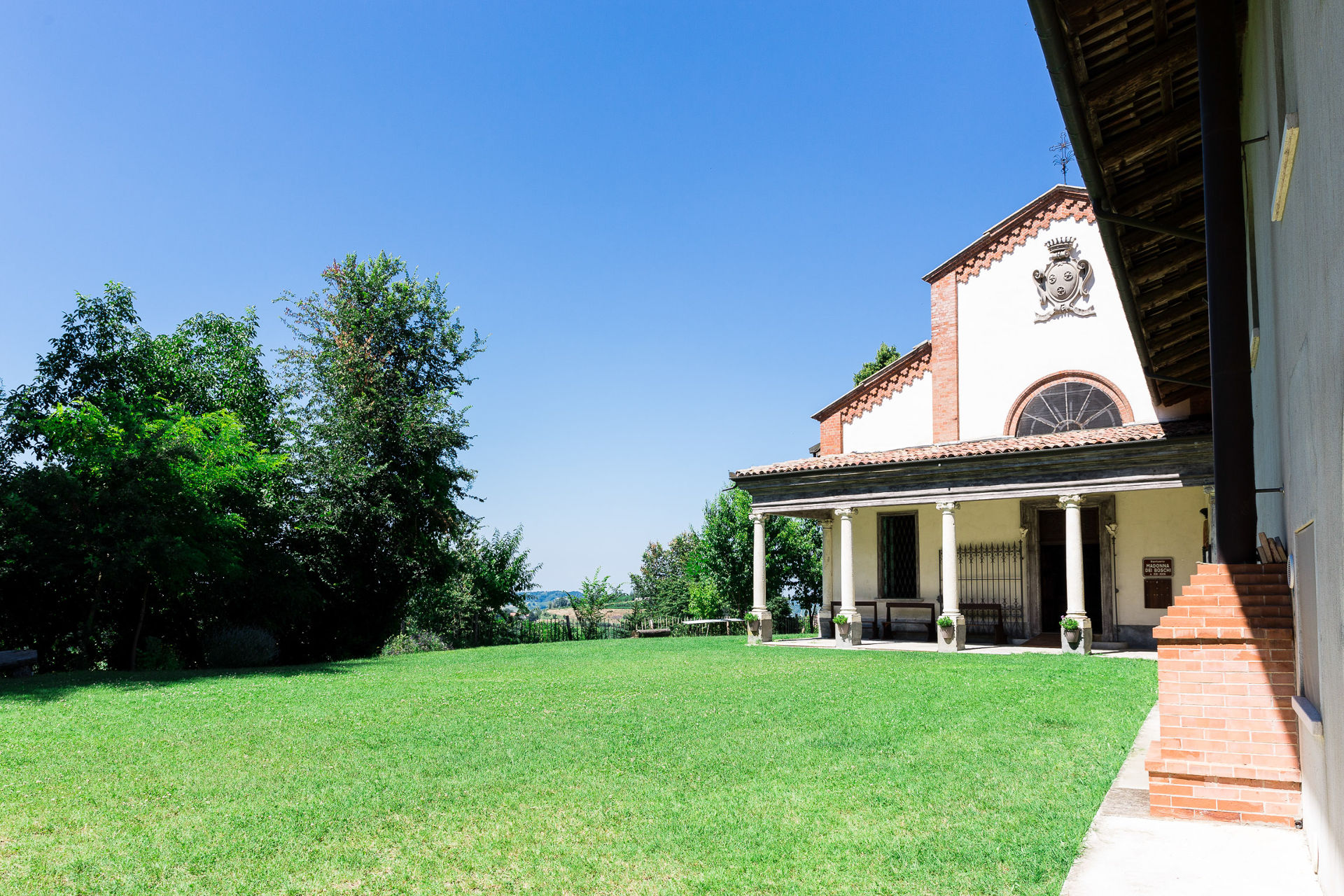 It was born towards the end of the 13th century as Ecclesia Beate Marie de Castiliono on the site of a pre-existing fortification. As the name itself suggests, “Castigliono”, there was an ancient fortress on site, used as a checkpoint by the local lords (the “De Vicia”). The Bishop of Asti recognised it as a patronage to the Roero Earls in 1471. A first phase of expansion ended with the construction of the convent for the Servite fathers of Sommariva Bosco, around 1520-1521.

In 1731 the church was enlarged with the addition of a new vault: this structural change confined a precious late Gothic fresco of the Annunciation to the attic.

In 1807, the extension of the liturgical building arrived. However, the current structure still retains consistent traces of the original Romanesque building with a single nave.

At the end of the nineteenth century it was sold by the Roero family to the Artigianelli Institute of Turin, and subsequently to the Diocese of Alba, and is currently closed to worship.

In its crypt various members of the Roero family from Vezza and Guarene were buried between 1608 and 1800.

THE ANNUNCIATION (last quarter of the 15th century)

The fresco in the attic is located on the front of the original arch that defined the presbytery sector, and follows the inclinations of the slopes of the original church on the top. It was restored in 2003, but it is still hidden and difficult to access, a fact that enriches its vision with an almost mysterious atmosphere.

Dating is difficult and the same scholars disagree with each other. What is certain is that the fresco, together with the others that once adorned the church and are now lost, was commissioned by the Roero family. We deduce it from the three silver wheels on a red field placed on the left side of the painting: they are the symbol of the Roero family. Based on this, it can be said that it was commissioned between 1475 and 1485 by Theodore I (who obtained the patronage with Odo in 1471) and his wife Jeanne de Greteim of Gascogne. 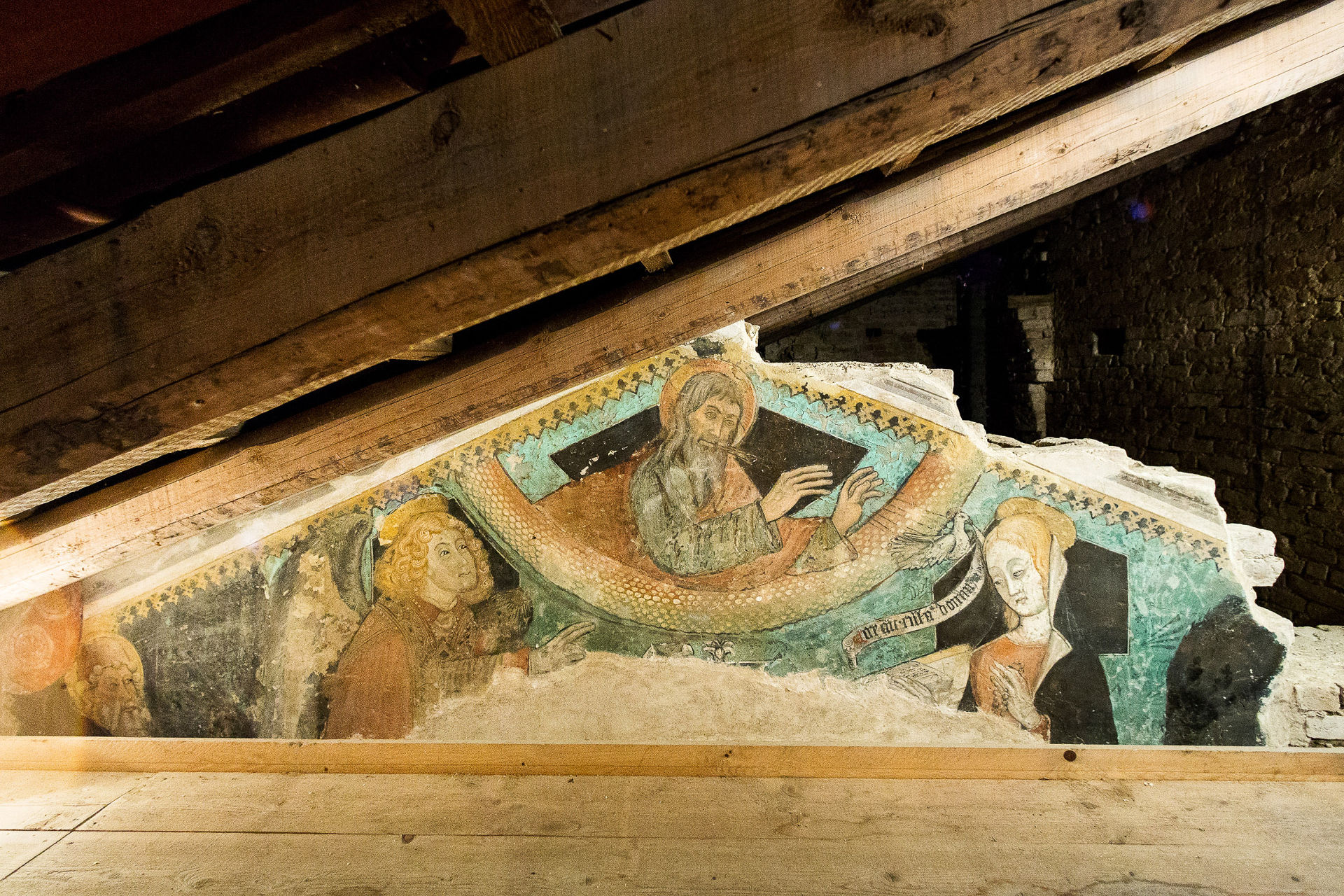 The iconography is certainly peculiar.

During the fifteenth century, the Annunciation was usually represented in two distinct panels: on the left the Angel and on the right the Virgin, sometimes interspersed with scenes from the life of Christ.

In Vezza d’Alba instead we notice three elements of distinction from the classic representations of the time: the presence of a prophet on the left (probably Isaiah), the image of God sending a dove, in the middle of the fresco, and the crown of Rosary in the hand of the Virgin.

Therefore the painter decided to implement a greater number of figures in the traditional iconographic scheme. The result is a greater connection of the elements of the scene, in which the Archangel Gabriel announces to Mary the incarnation of Jesus Christ, through the Holy Spirit sent by God.

The chromatic vivacity of the fresco is also noteworthy.

Another peculiarity is represented by the Virgin, who is depicted intent on reciting the Rosary. The fresco was somewhat ahead of its time: the Rosary is a devotional exercise of medieval origin, but its spread throughout the territory only began in the following centuries.

Ready for the call, Maria answers “Ecce Ancilla Domini“, as we read in the epigraph of the cartouche, in Gothic characters.

In the middle, at the top, the figure of God is captured in the dynamic act of sending the Holy Spirit in the form of a dove, and is almost depicted as Pantocrator God, surrounded by a circular iridescent band.

Noteworthy is the Archangel Gabriel. Its feathers are not white, but peacock feathers, as in Flemish art. The precious detail therefore makes us think of a model of Nordic inspiration, such as that of Giusto di Alemagna, who painted the well-known Annunciation in Genoa in Santa Maria di Castello in 1451. The latter has many elements in common with the Vezza d’Alba fresco: the angel with peacock feathers, the position of God surrounded by a band and included in a blue frame, the position of the angel’s hands.

So who was the “Master of Vezza d’Alba”, perhaps active between the last quarter of the 15th century and the beginning of the 16th?

We know very little: he certainly drew its taste from the full late Gothic climate, distinguished by a calm folk narrative and some stylistic features of Nordic, Franco-Flemish derivation, such as the detail of Gabriel’s wings. One hypothesis refers to the painter named Corrado d’Alemagna, who worked in Taggia in the fifteenth century.

The local taste experienced a vast and prolonged adherence to the late Gothic styles, but given the commissioning of the Roero family it is perhaps in the long-range mercantile relationships of the same that the common thread for a possible working contact with the artist of probable Nordic origin, until that time active in western Liguria, must be found. 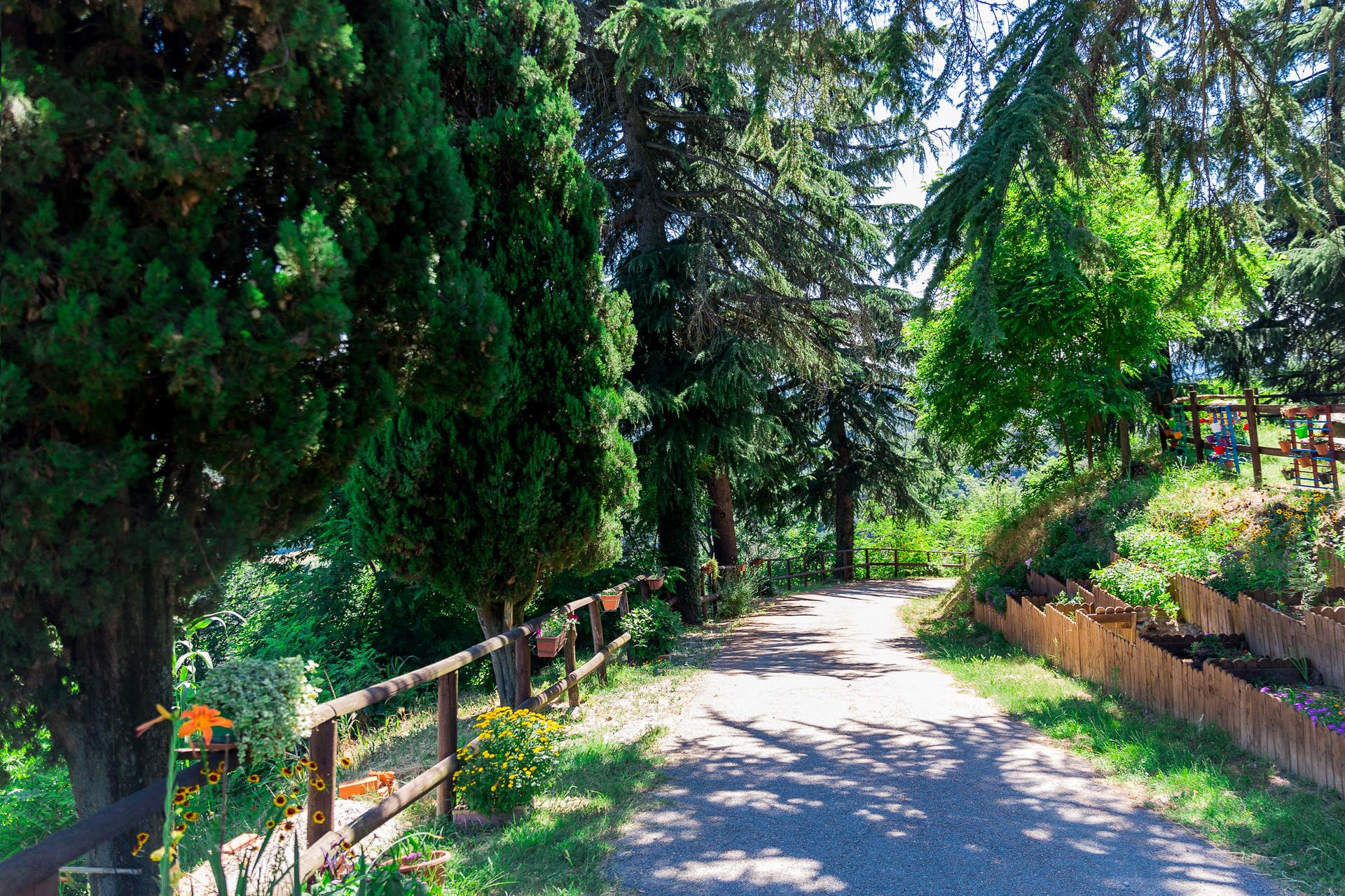 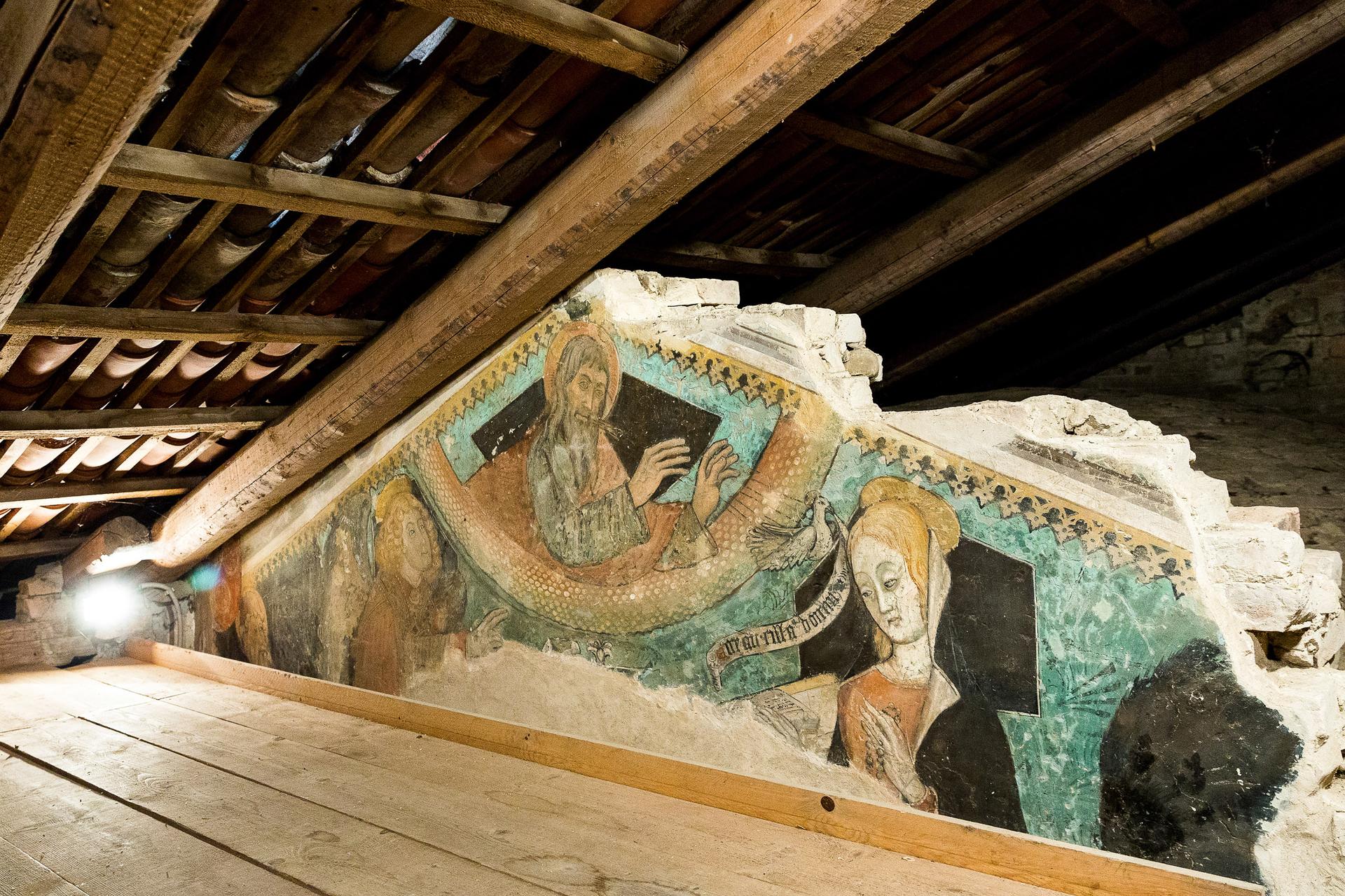 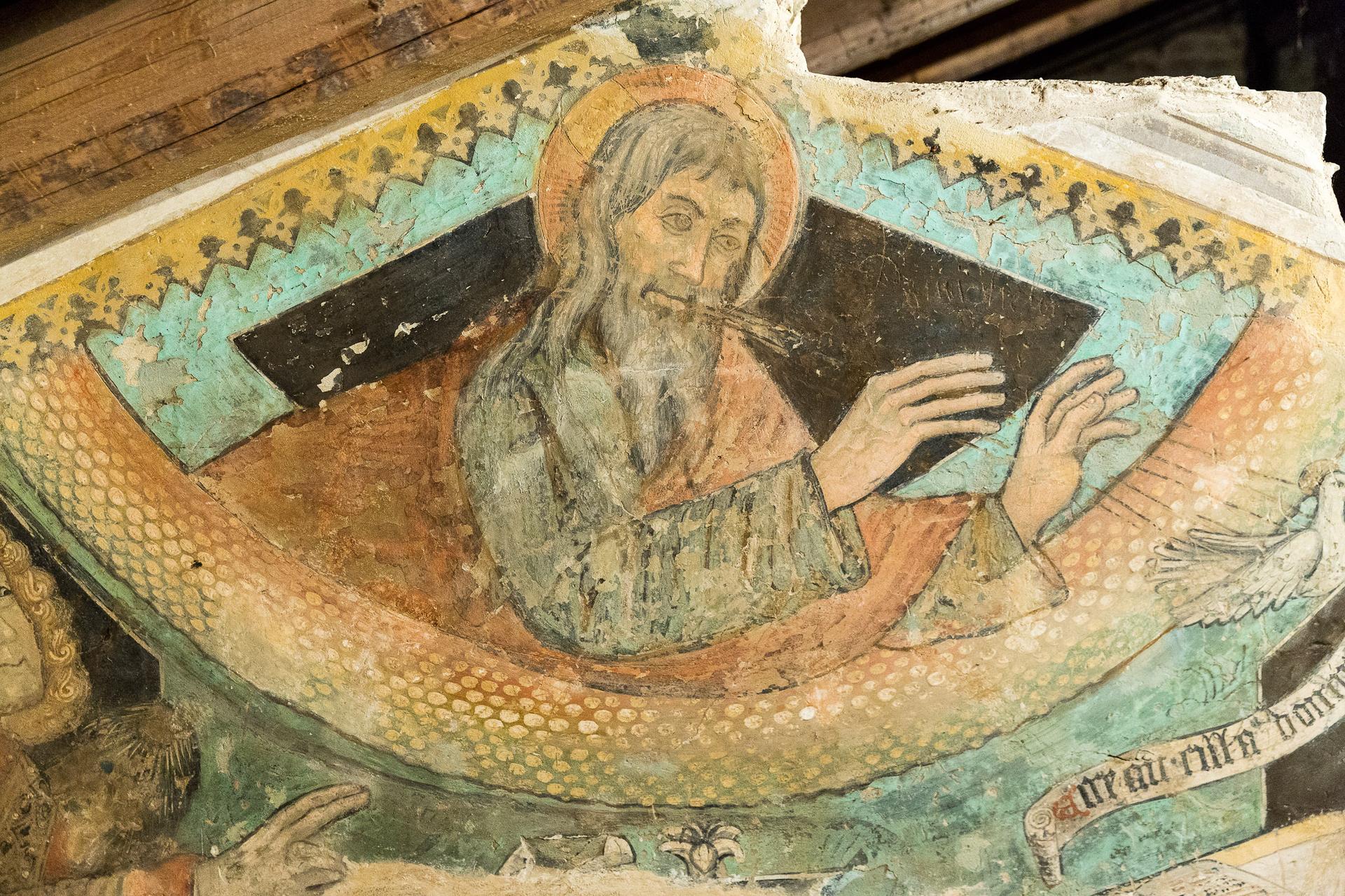 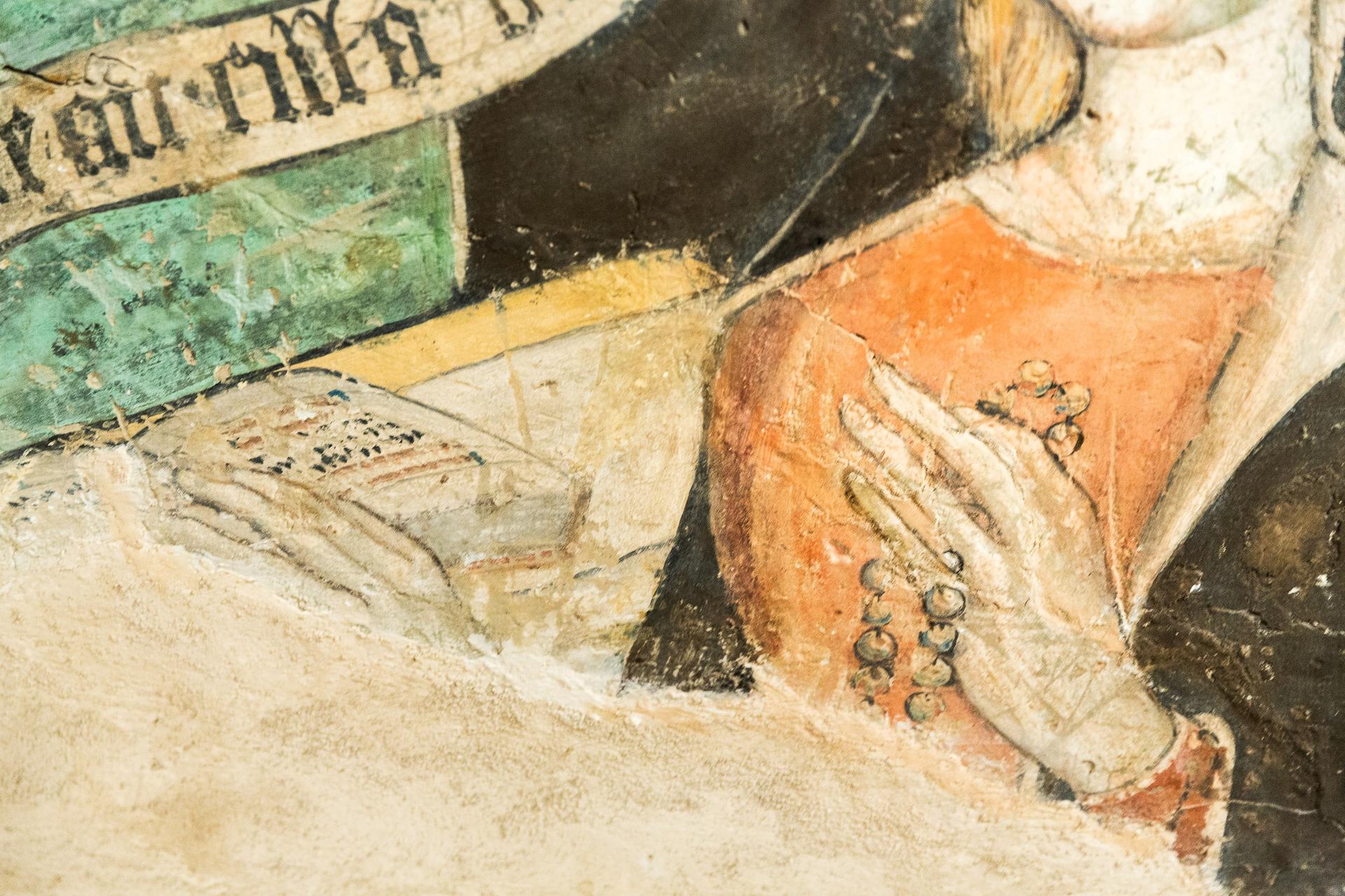 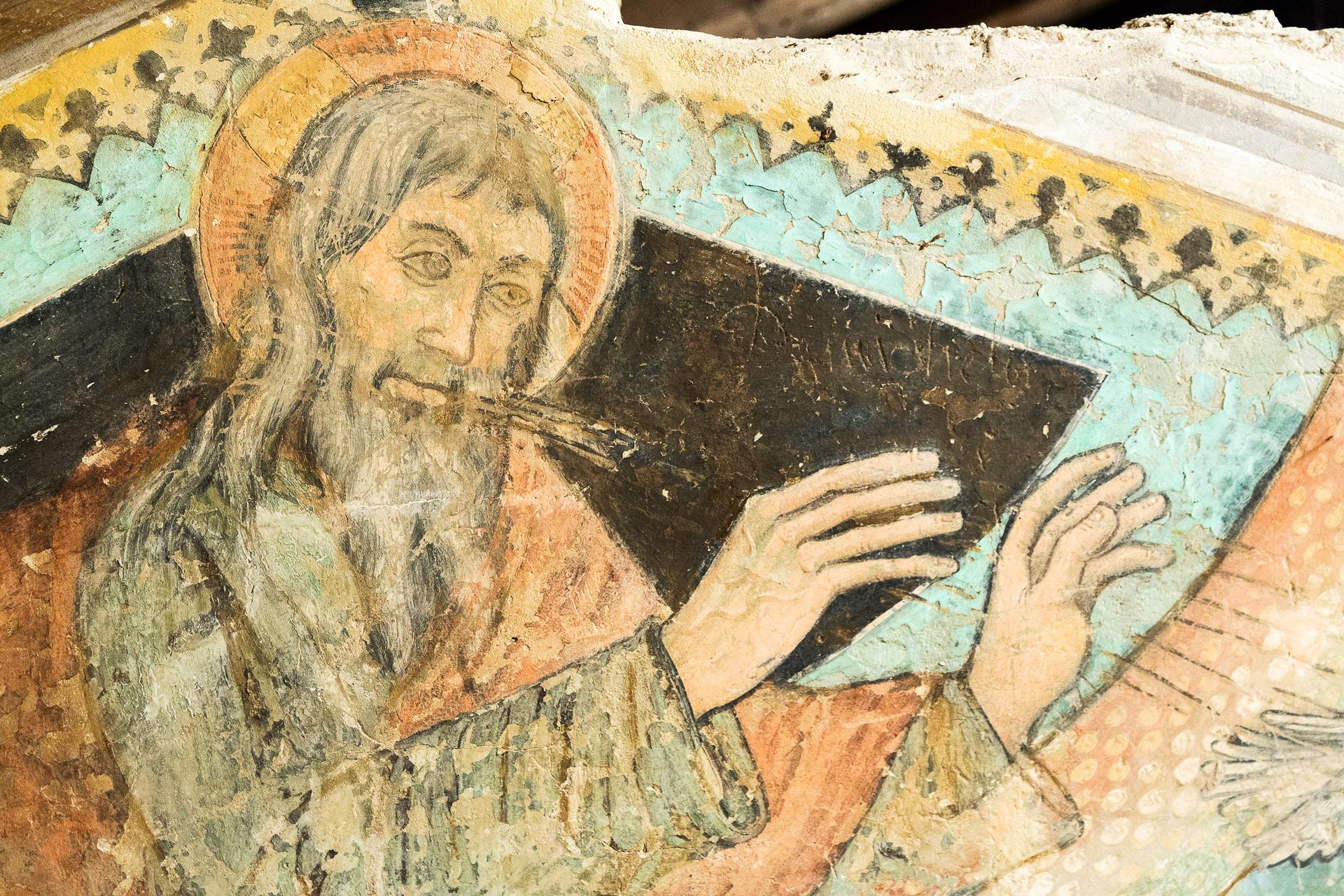 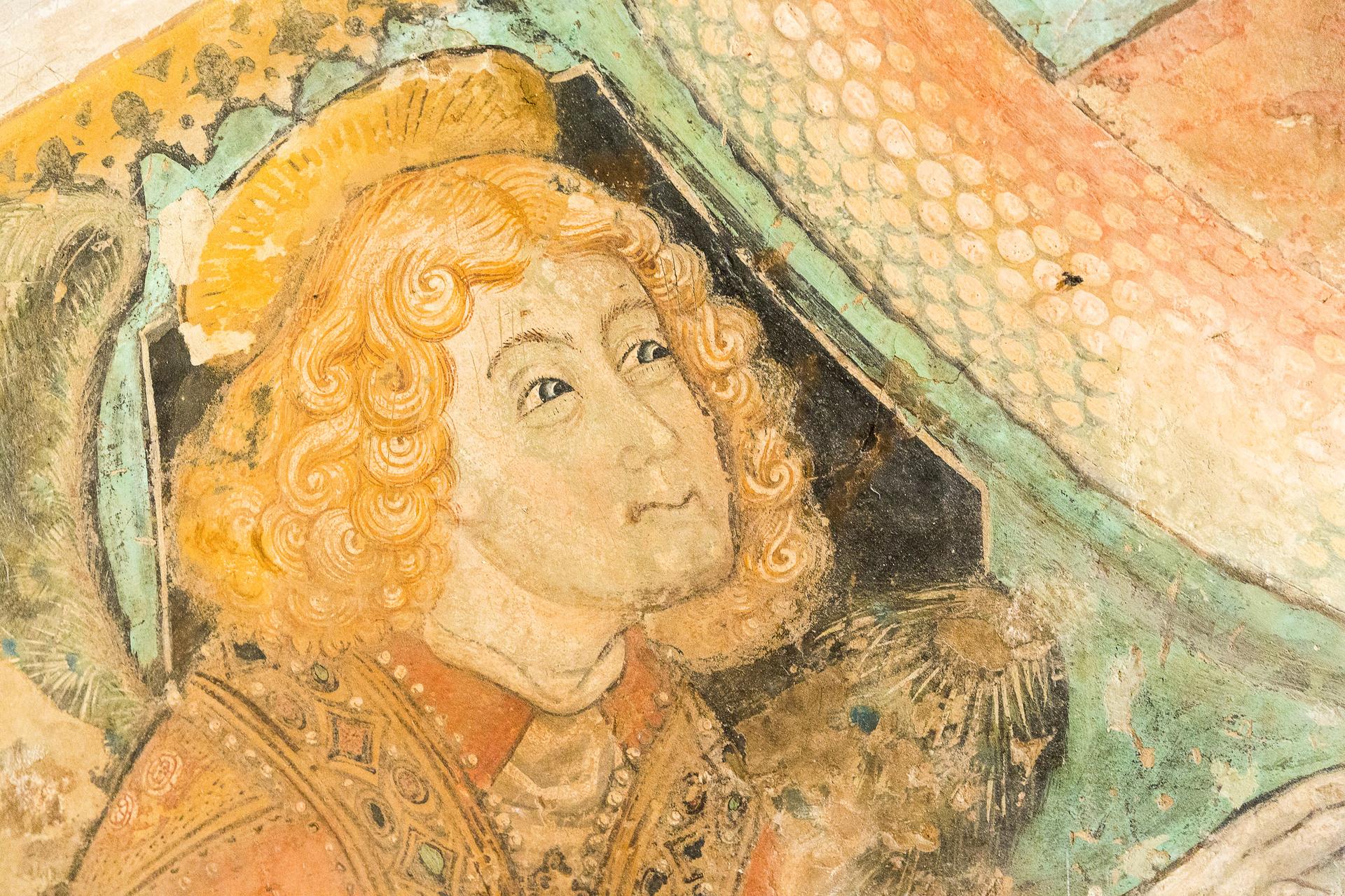 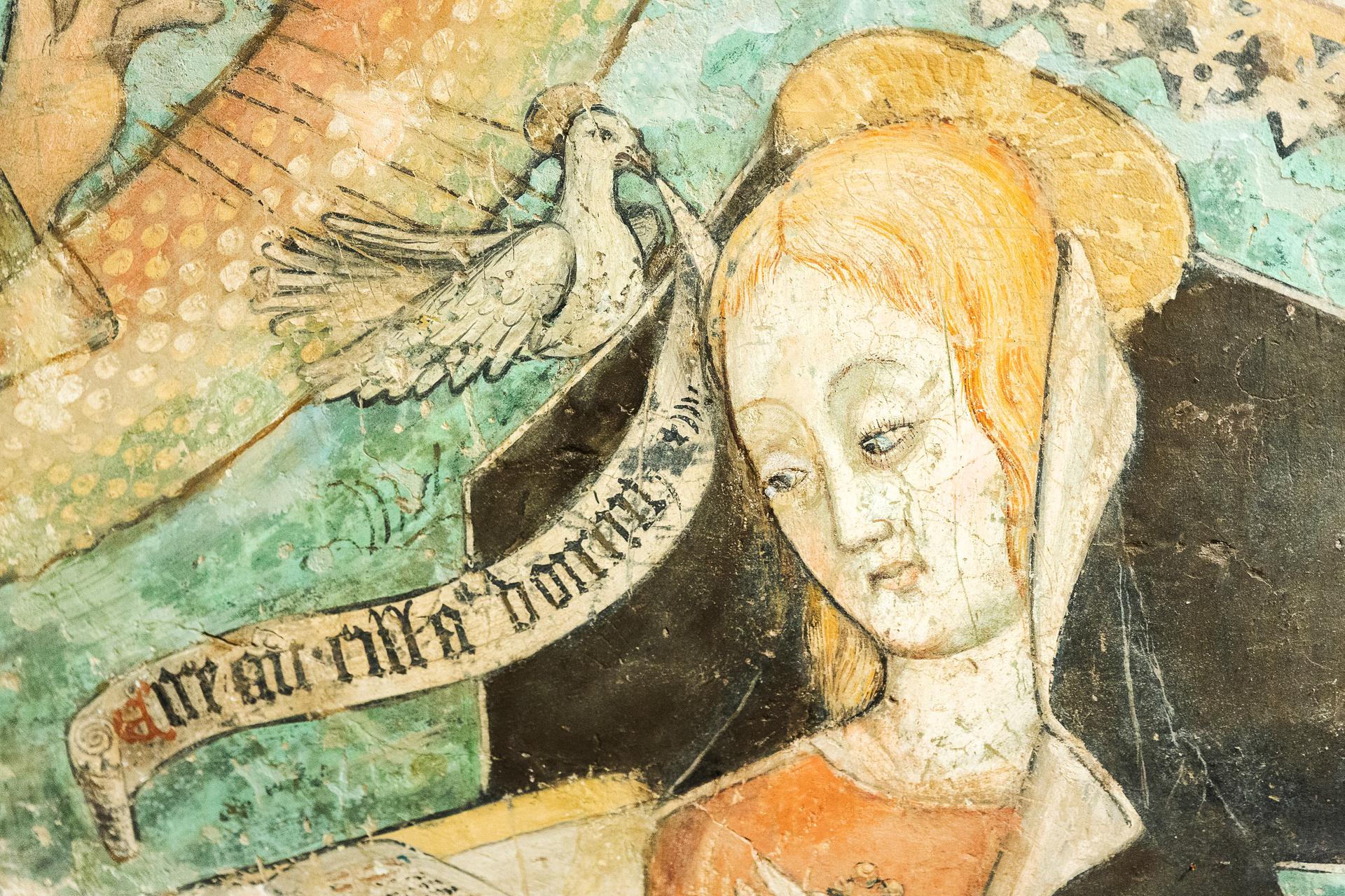 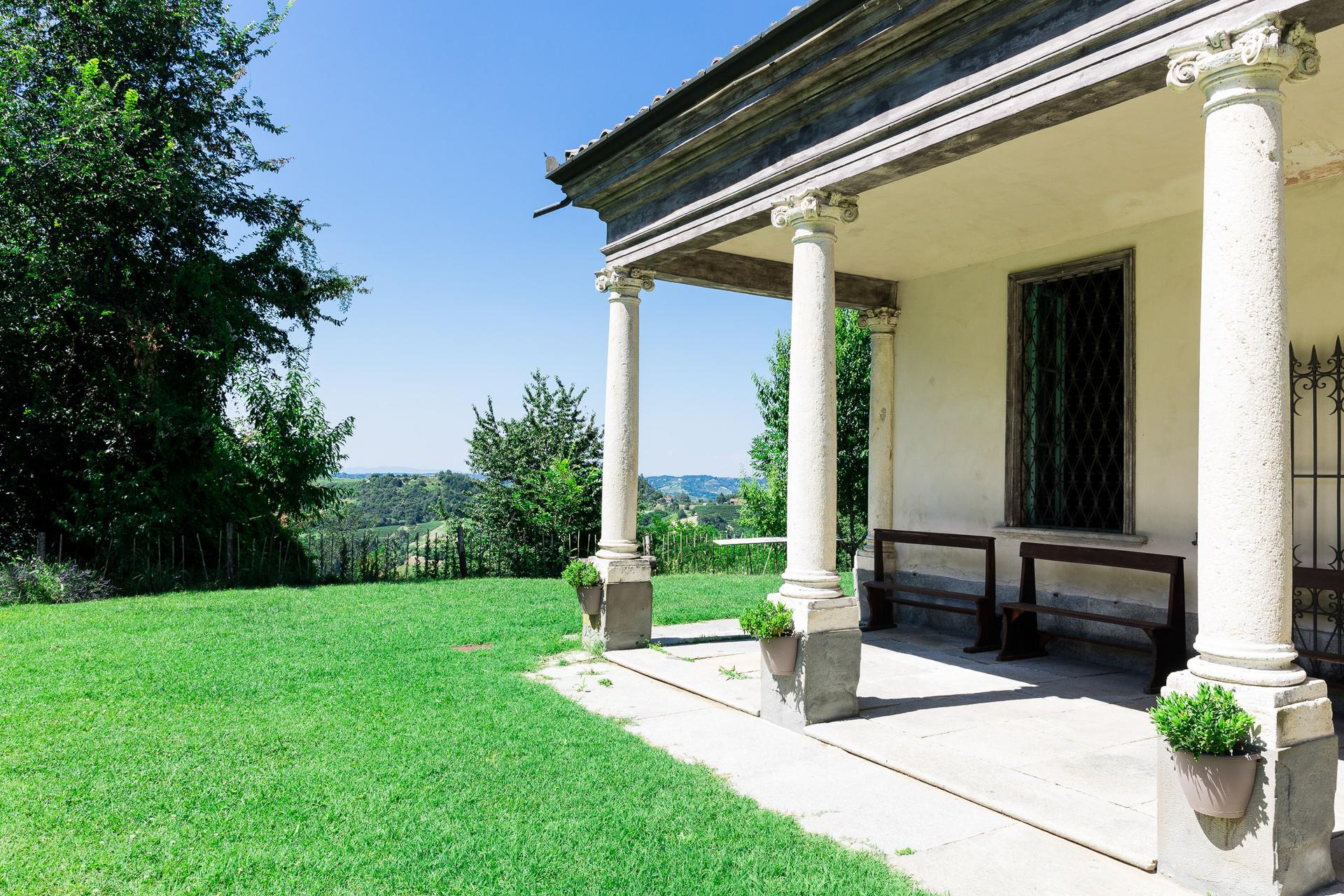 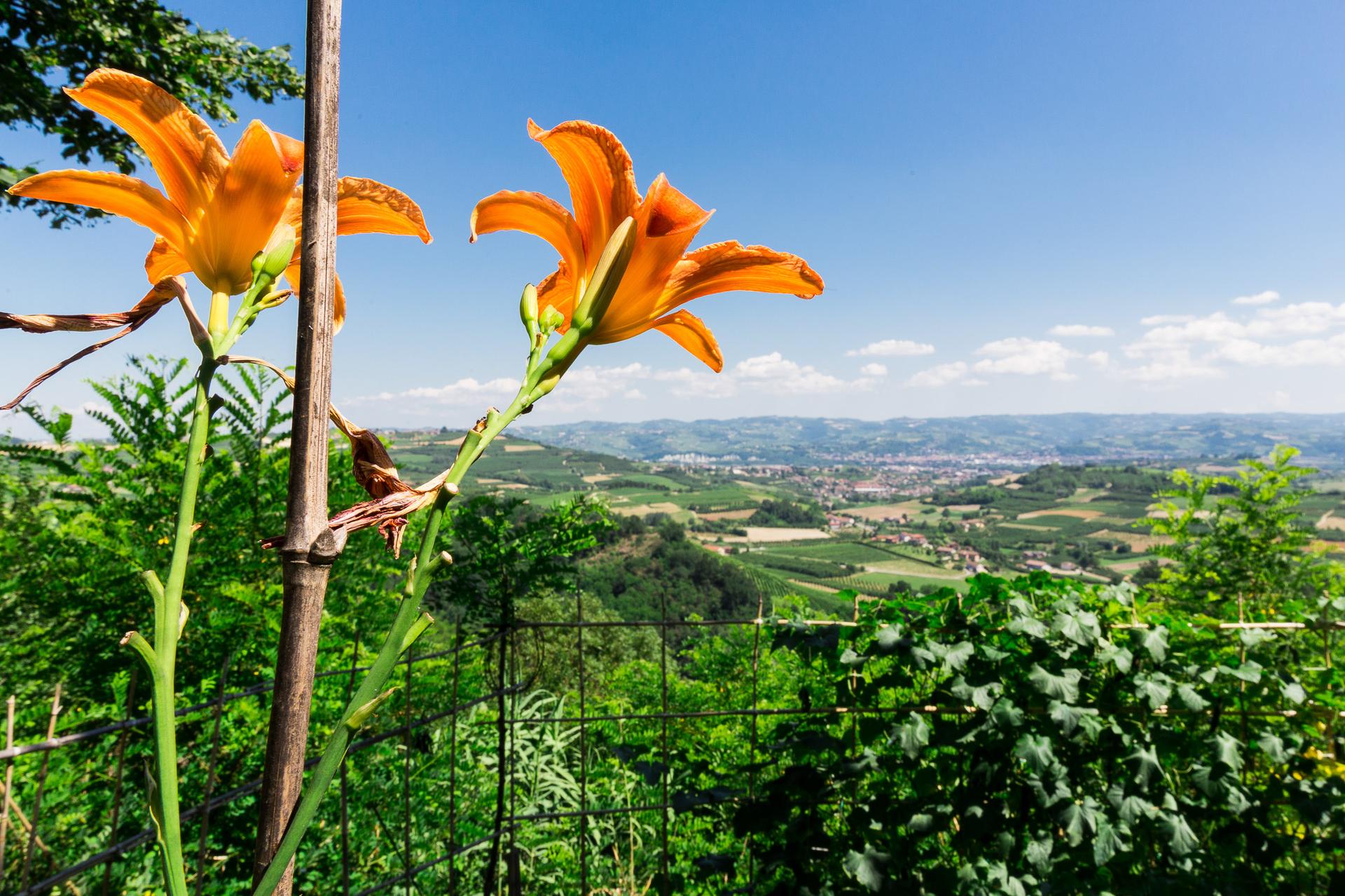