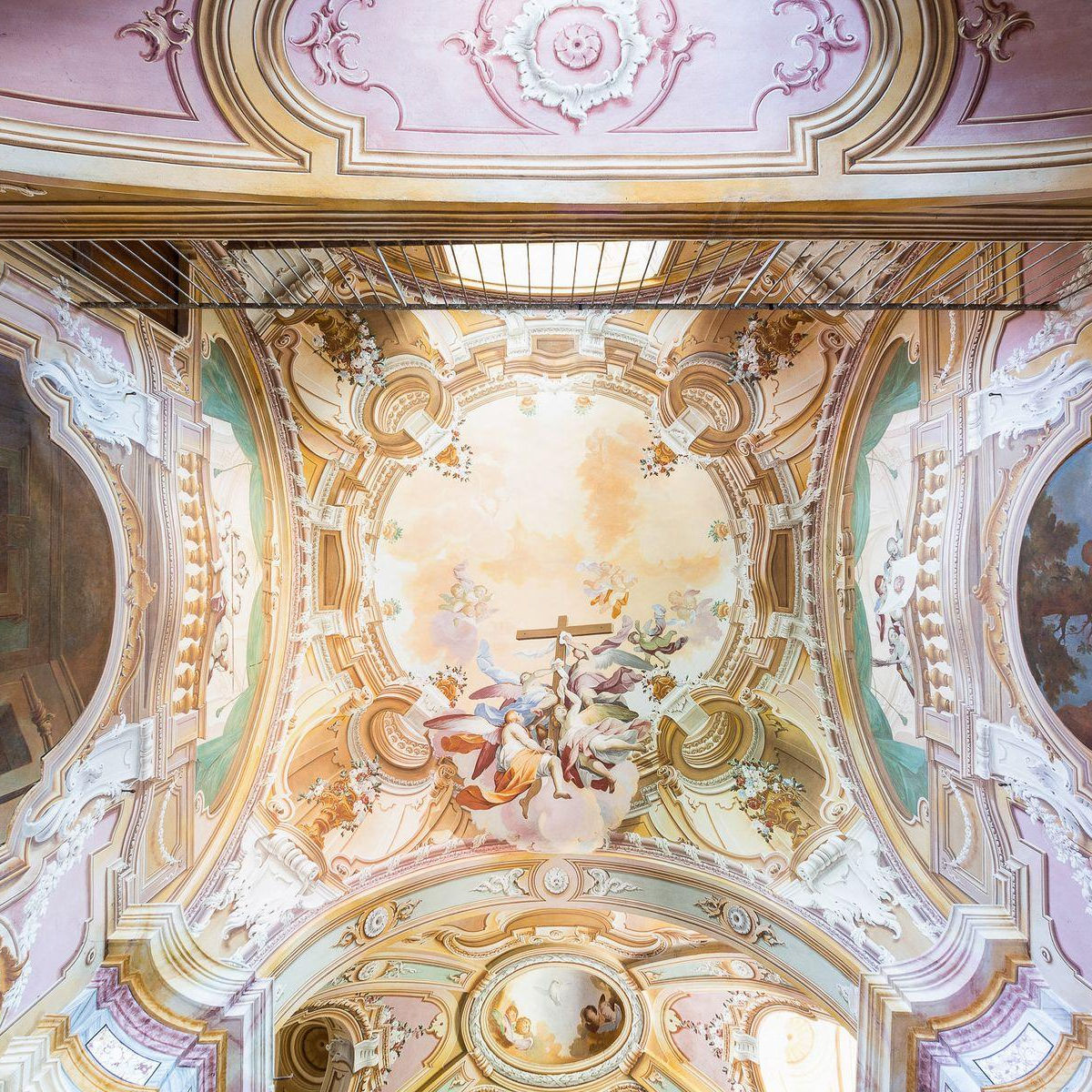 The favourite church of Vittorio Alfieri's mother, among majestic trompe l'oeil and vertiginous Angels in heaven.

Whether it is the trompe l'oeil perspectives of the eighteenth-century frescoes attributed to the Opera, or the very graceful Baroque style. Or the beauty in which you can immerse yourself looking up towards the ceiling of the nave, full of symbolic and majestic decorations, among which an Angel showing the Holy Shroud: when we enter this splendid chapel in the castle residence of the Alfieri Earls we are amazed after the first steps and the first glance.
NEI DINTORNI VEDI I SENTIERI MAPPA SCHEDA TECNICA

NOBLE CHAPEL OF THE MOST HOLY CRUCIFIX

The favourite church of Vittorio Alfieri’s mother, among majestic trompe l’oeil and vertiginous Angels in heaven.

The “Castle” of Magliano Alfieri was built starting from 1649, moving from the site of the medieval manor. The building was commissioned by Catalano Alfieri and then completed by his son, Earl Carlo Emanuele. It has been restored only in recent times.

Currently it also houses a “Museum of the Culture of Gypsum”, very abundant material in the area and a significant element of the local peasant cultural identity, as well as the “Landscape Theatre”, aimed at landscape quality. 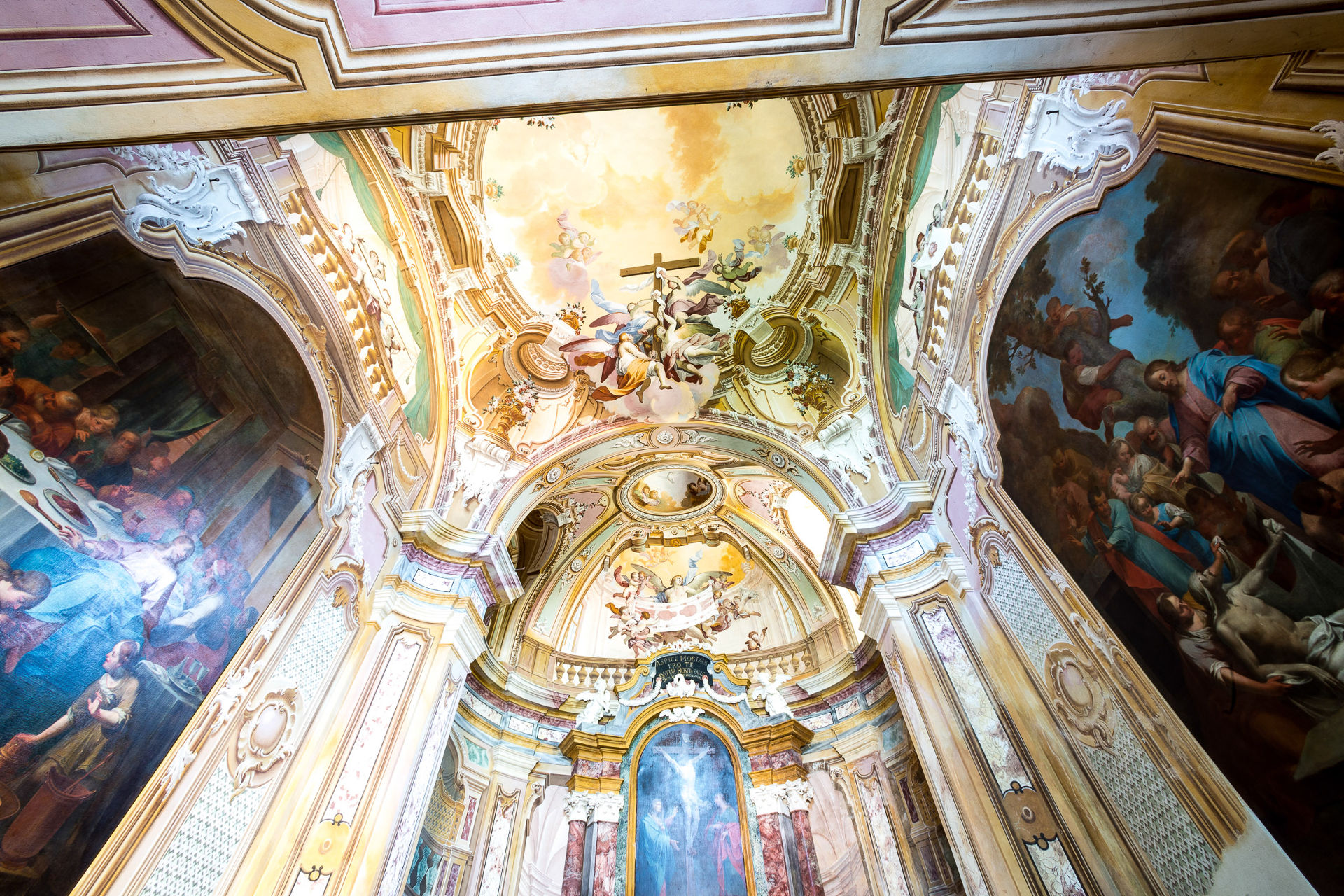 Located on the north-east side of the Castle, the noble chapel dedicated to the Holy Crucifix strikes those who enter for its Baroque style, for the majestic frescoes that decorate it and for the paintings on canvas.

It was built in 1768 by Carlo Giacinto Alfieri di Magliano, the third husband of Vittorio Alfieri’s mother.

The chapel must have been particularly dear to Alfieri’s mother: so much so that in order to grace her favours, Vittorio himself worked with his contacts so that it was consecrated and his mother could take Communion there during her stay in the castle. 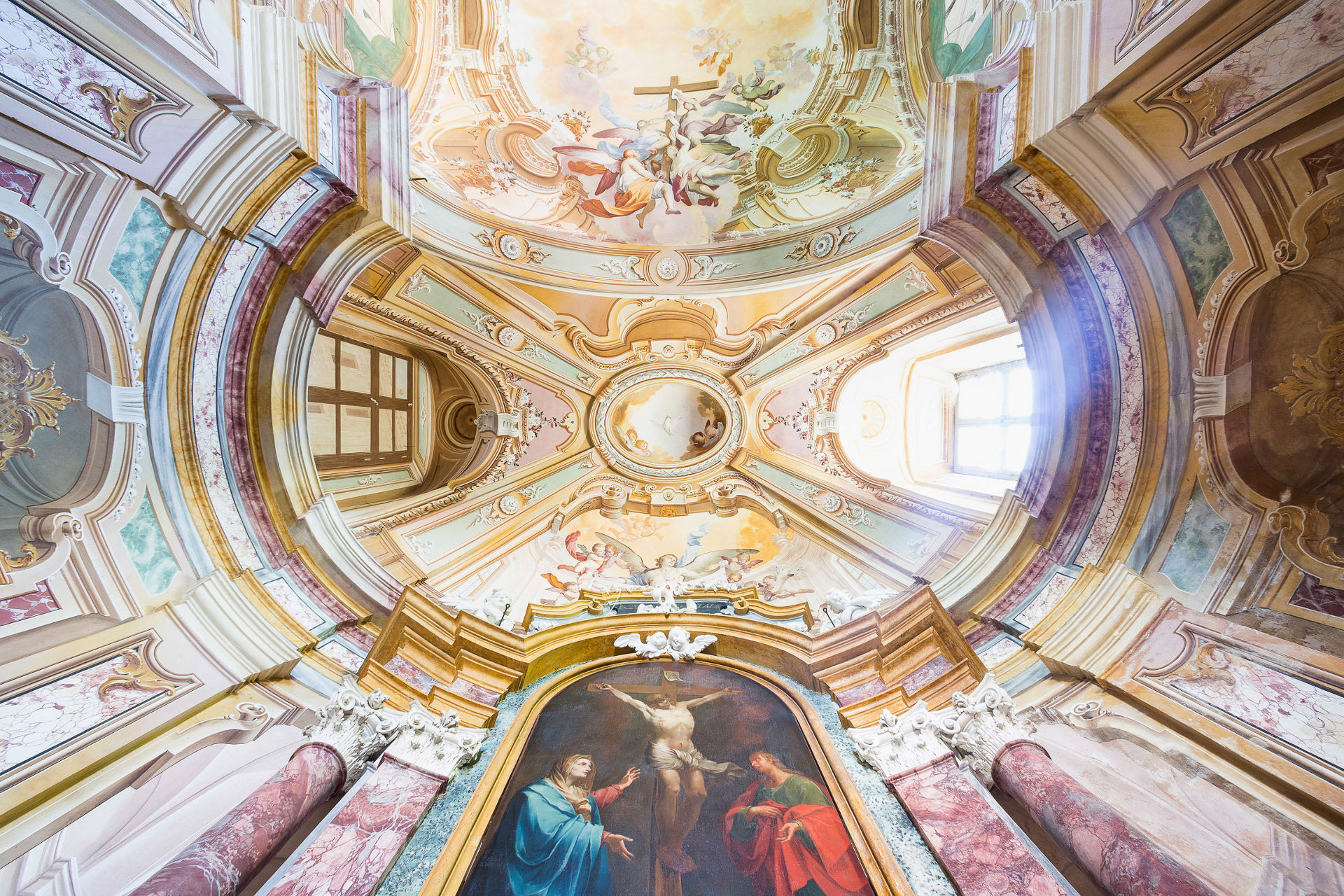 The frescoes, made with perspectives of remarkable trompe l’oeil architectural effect, are attributed to Pier Paolo Operti, a painter from Bra, active in Bra, Saluzzo, Cherasco and La Morra.

Over the years, the chapel was abandoned together with the castle: in the 1970s it was even used as a warehouse for pasta and rice. Nevertheless, during the restoration in 1994, the technicians were surprised to find the eighteenth-century colours almost intact even in the paintings.

After passing the sandstone door that overlooks the street, we enter the only nave of the oratory, with a rectangular plan. The circular opening on the bottom contains a faux marble and stucco baroque altar with a sober and refined design. Noteworthy is the decoration that adorns the altar, which culminates in two white angels placed on the sides of the pediment, executed with skill. In the middle we can see a pelican in the act of tearing its chest. A strongly symbolic animal, it was believed that it performed this sacrificial action to feed its children, thus becoming an icon of self-denial towards children and a symbol of Christ’s sacrifice. 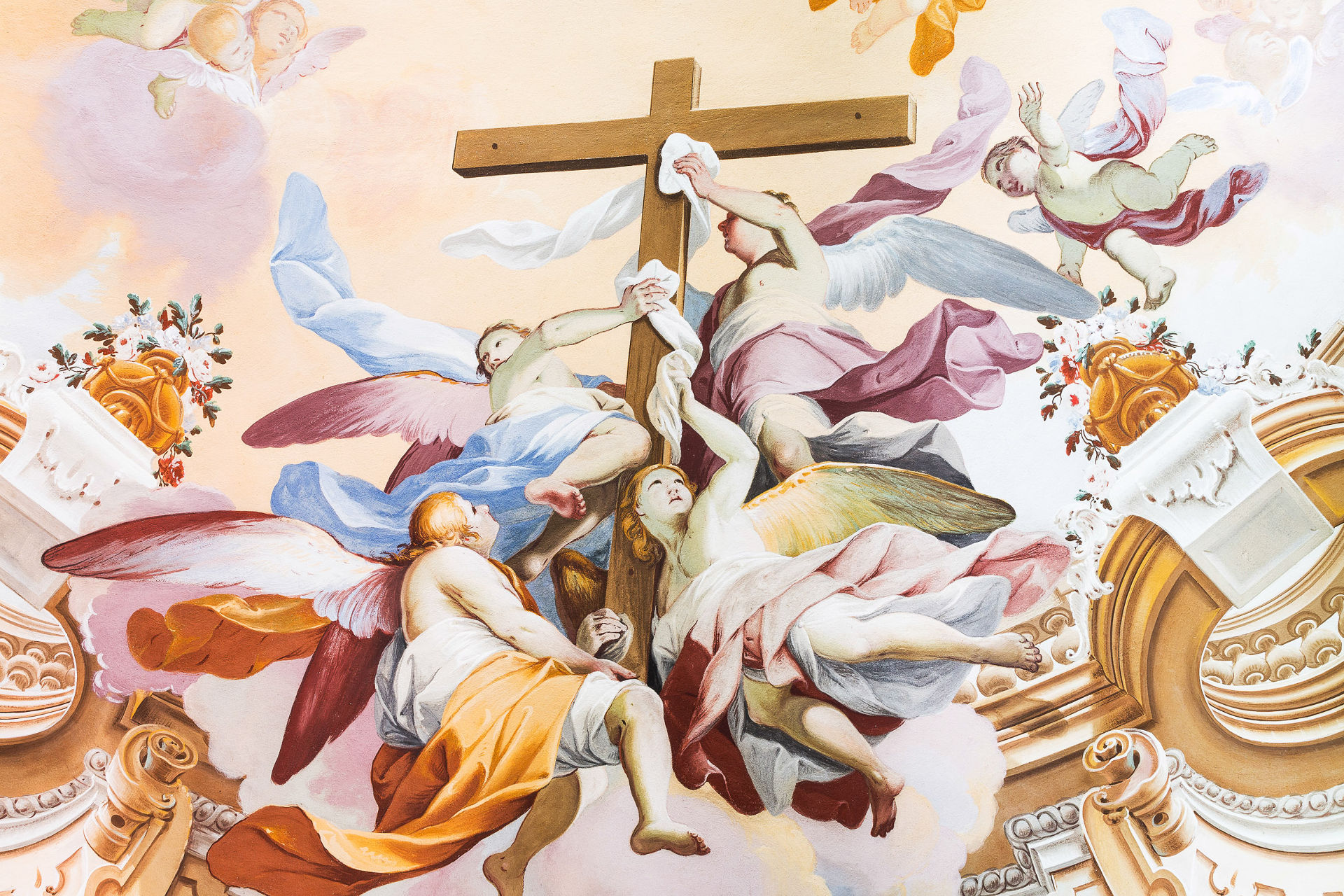 From a fake balcony above the altar, an archangel shows us the Holy Shroud, surrounded by numerous little angels. The Savoy family transferred the Holy Shroud to Piedmont from Chambery in 1578: many families linked to the Savoy dynasty chose to have the relic painted in their chapels, considering it highly prestigious (see W. Accigliaro, ” Immagini e Culto della Sacra Sindone nella Diocesi di Alba ” By Walter Accigliaro, 2000).

In the middle, from an eye of heaven, the dove symbol of the Holy Spirit appears.

The ceiling of the nave is frescoed with a splendid illusive decoration of remarkable effect, which expands the space and opens up showing a warm coloured sky. Some little angels look out on it, while other angels rise rapidly carrying the Cross in triumph.

On the sides, high painted balconies present jubilation of little angels with the symbols of the passion. Finally, fake niches are arranged in the pendentive of the dome, with four flower vases painted inside. 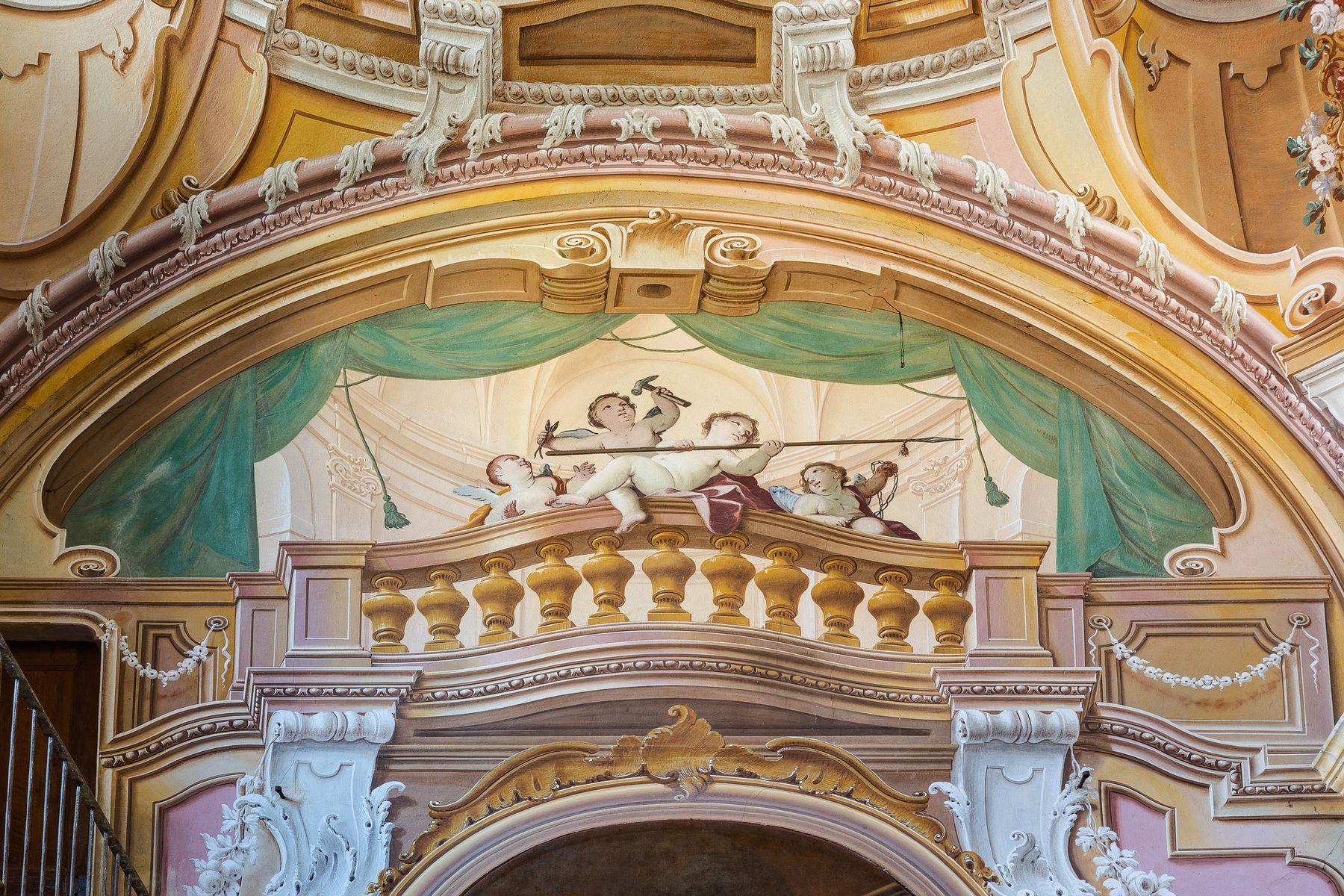 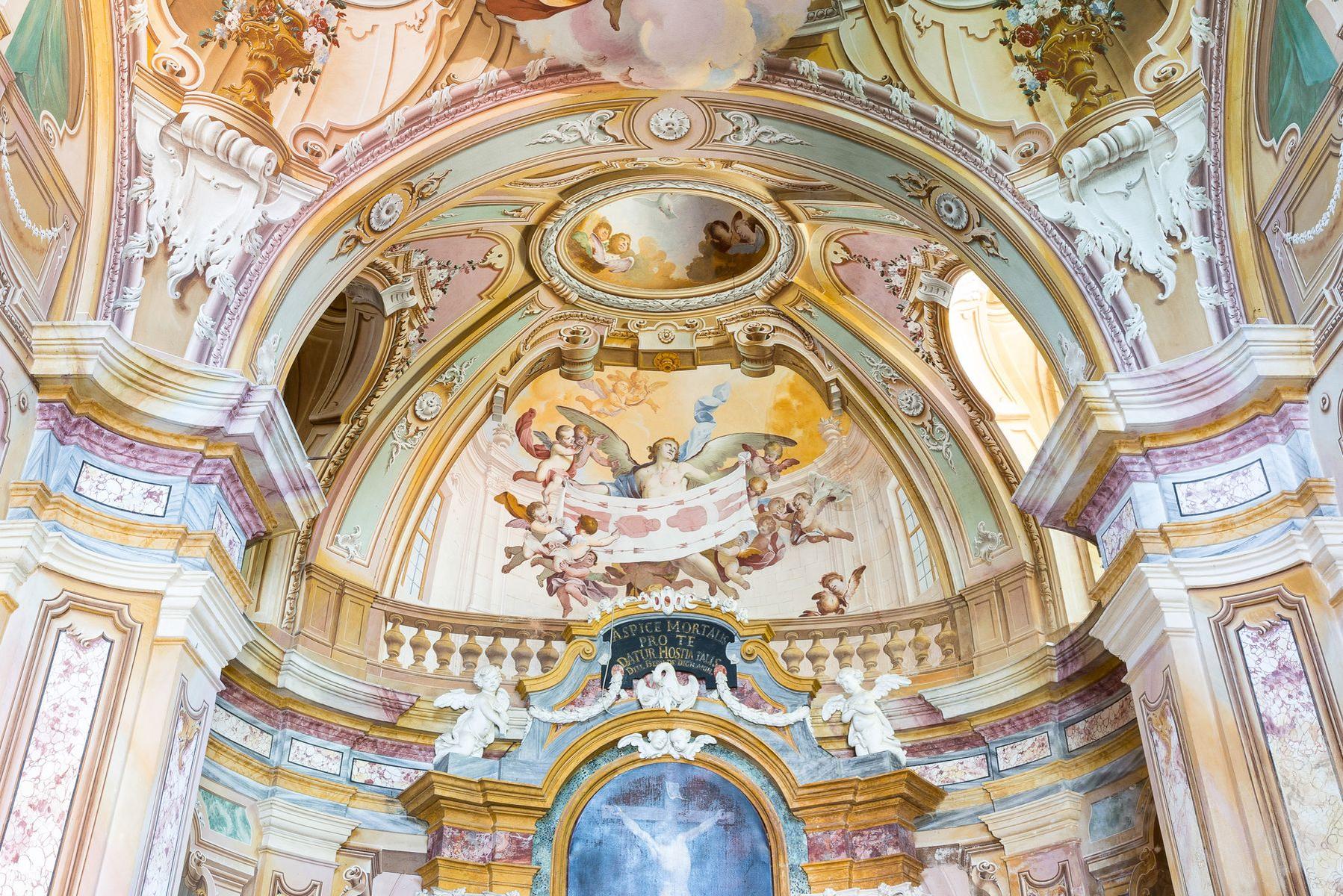 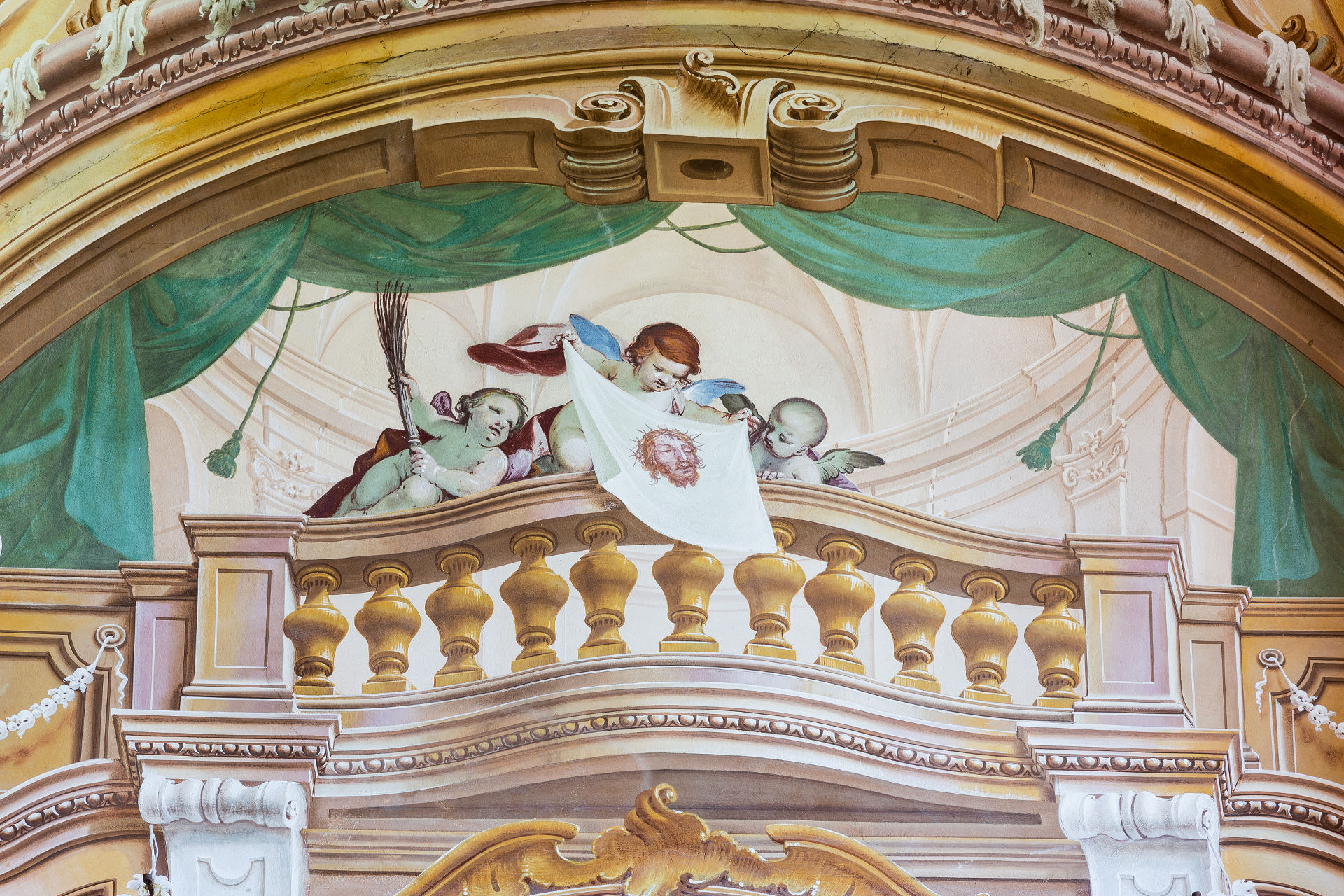 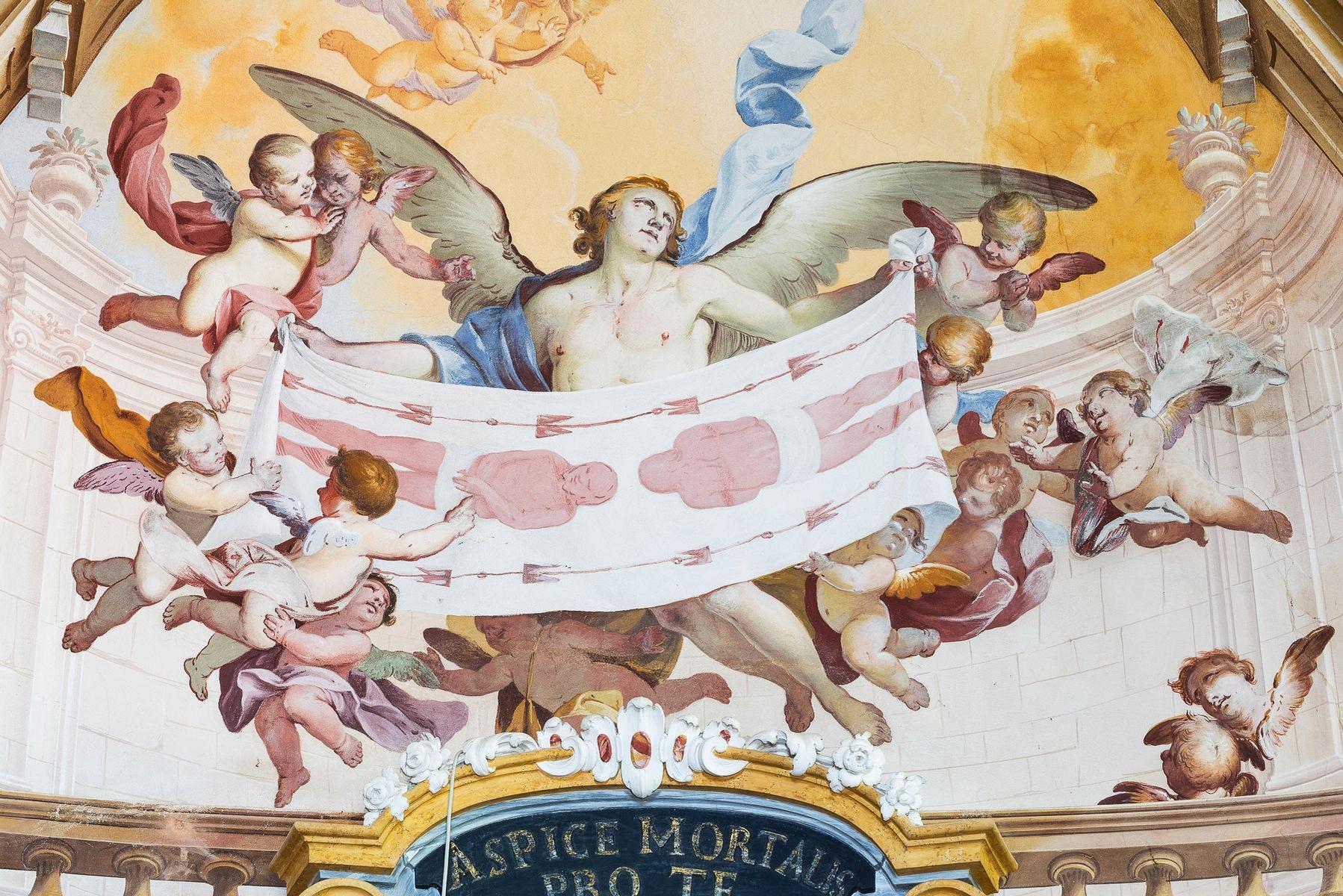 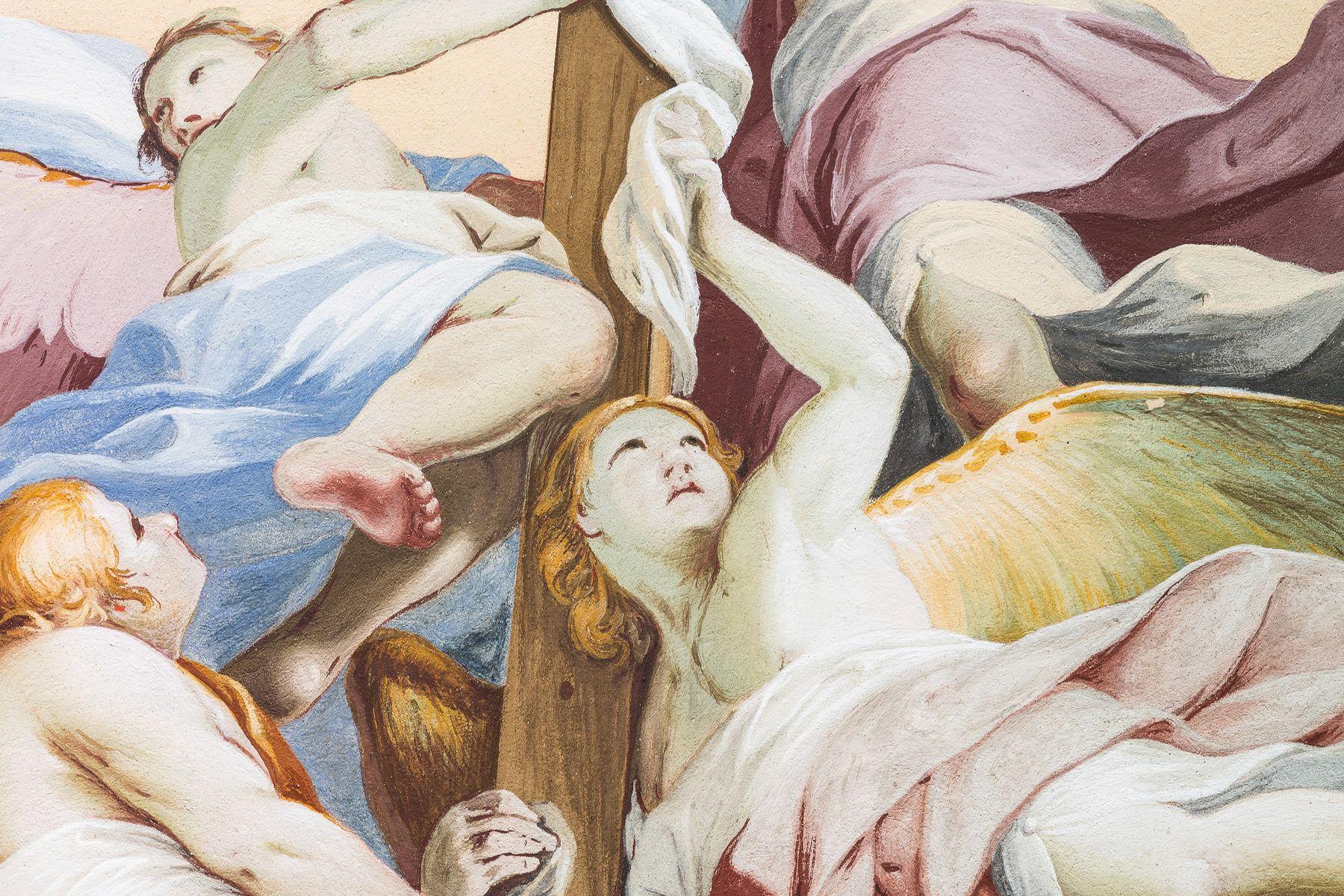 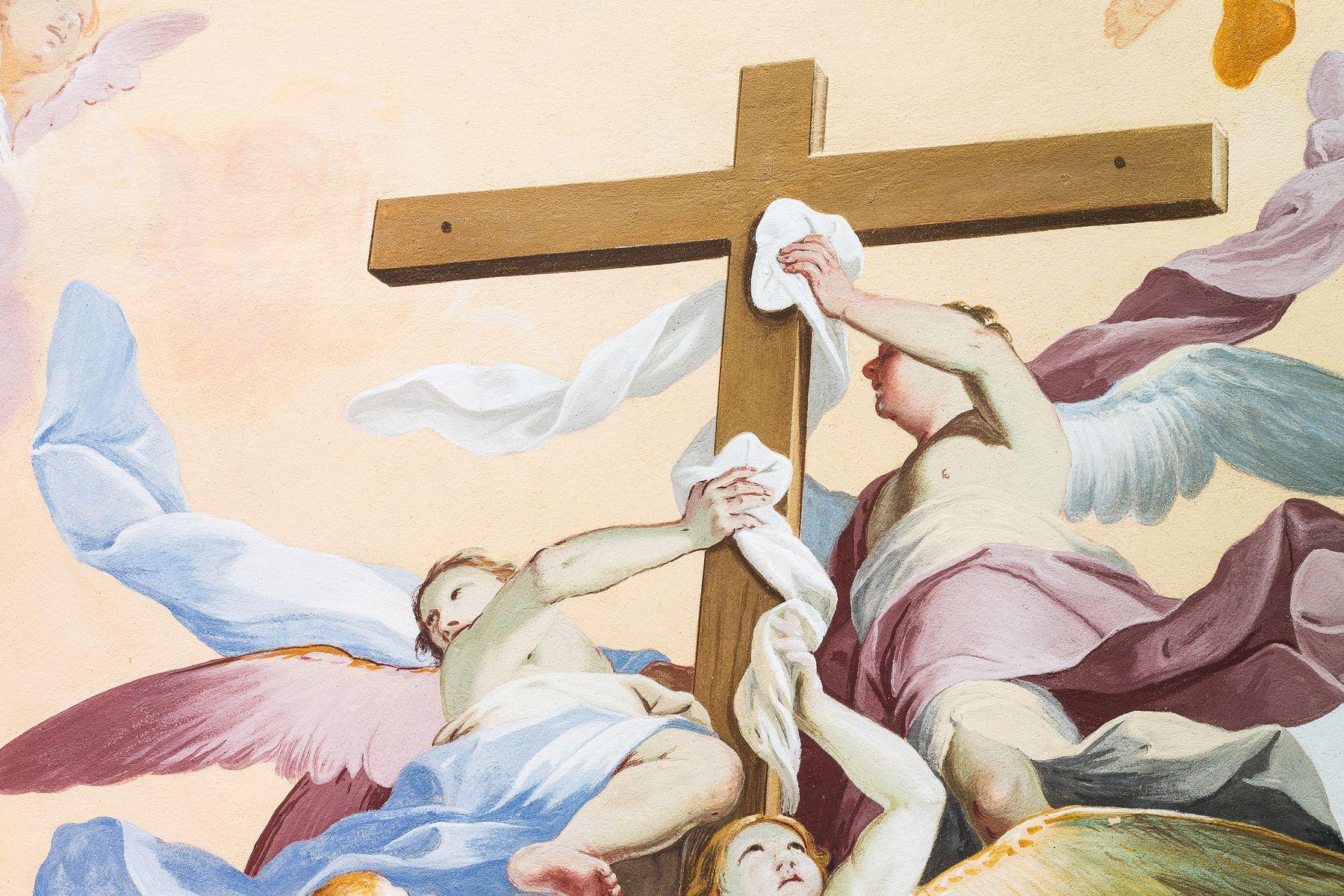 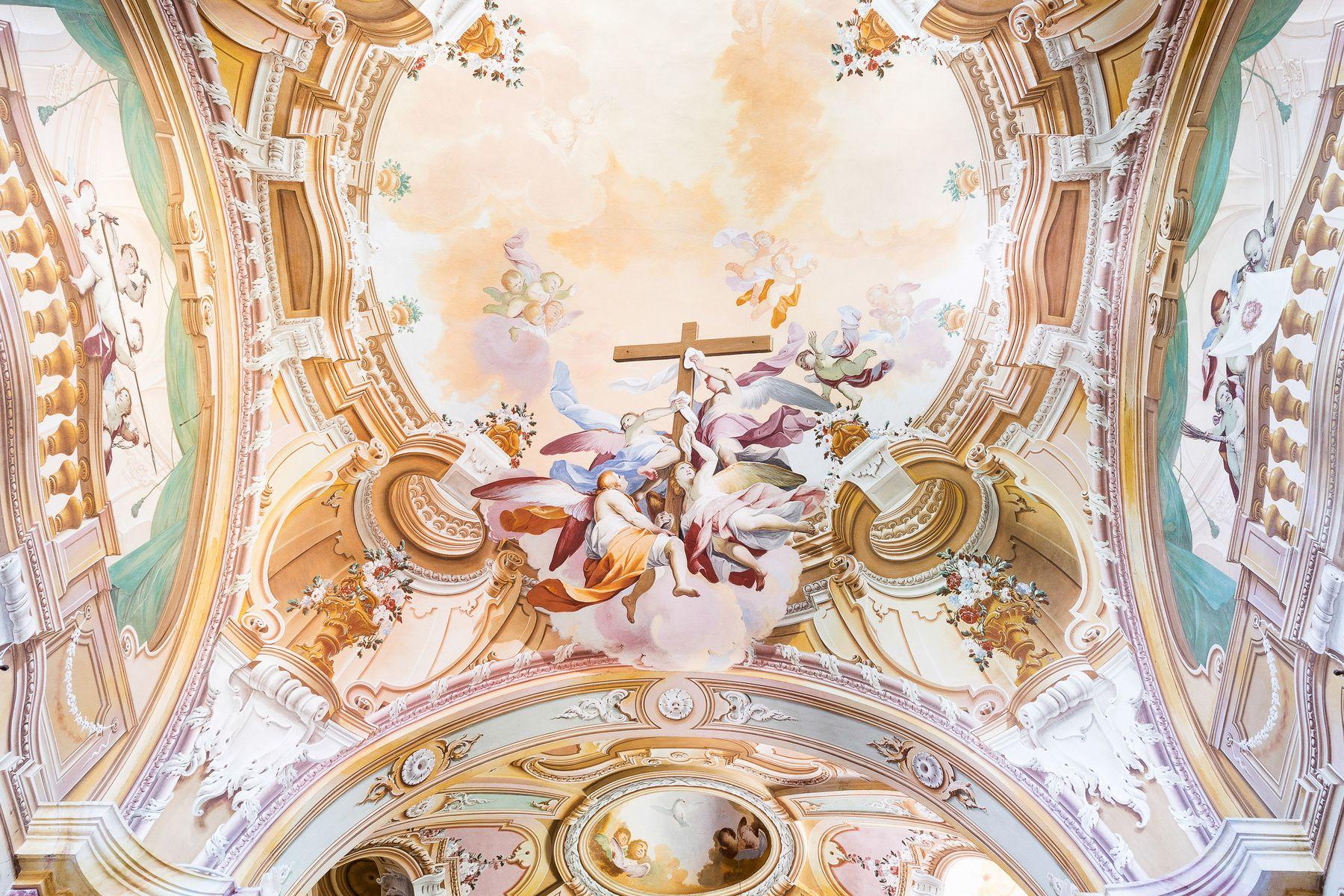 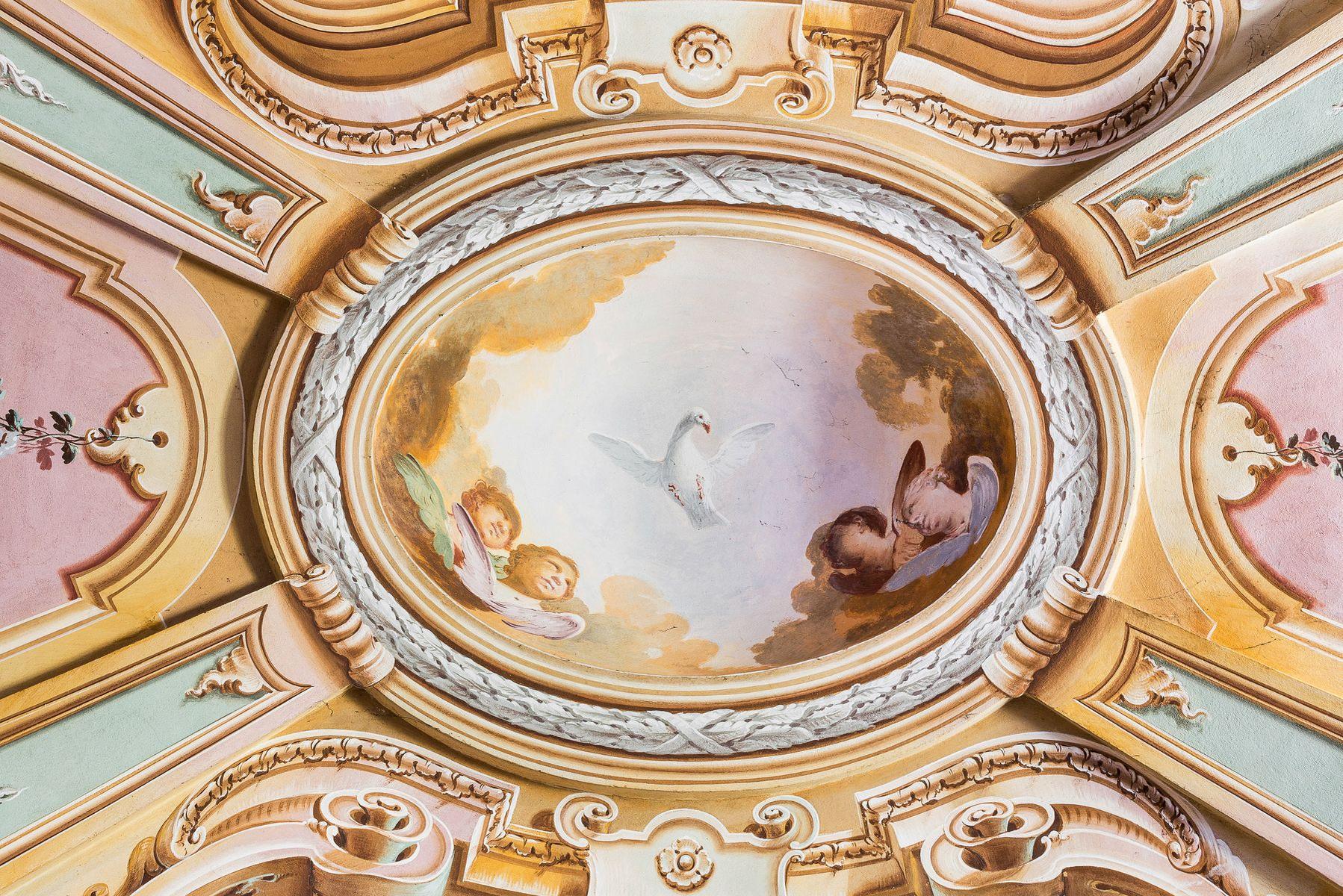 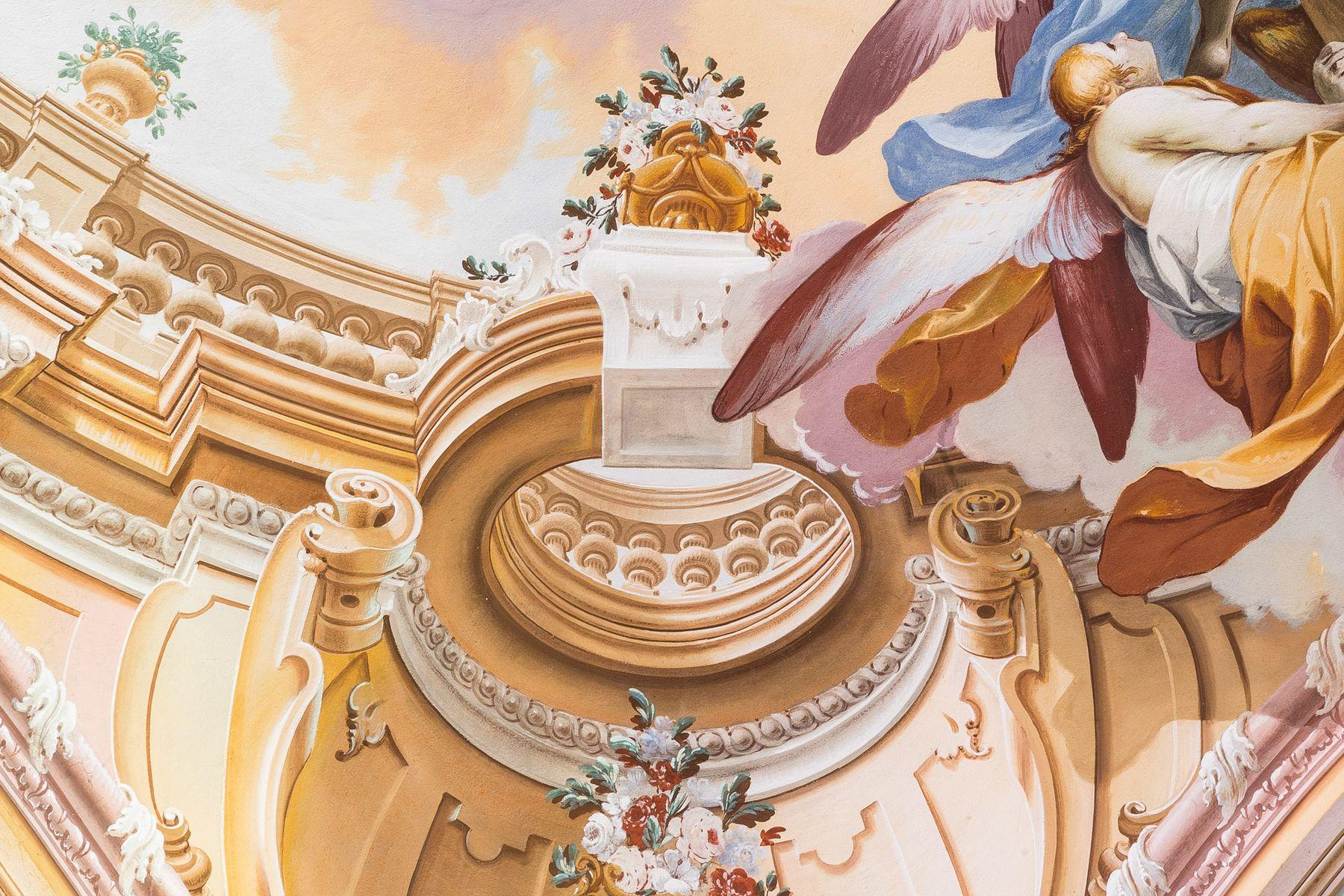 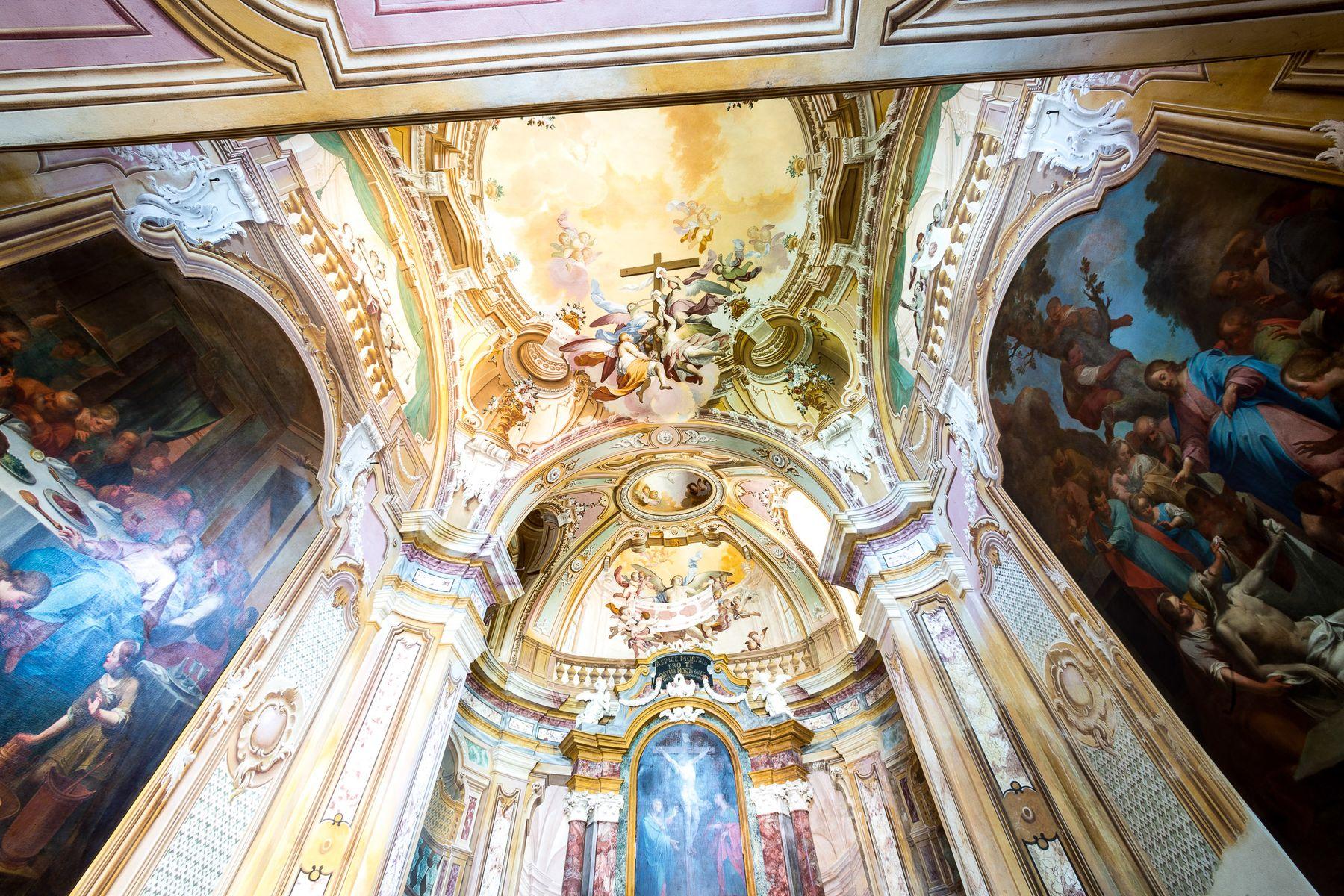